I have just read Professor Downie’s response (Ingenia 60) to the editorial Attracting the next generation. I am the Director of STEM at a large comprehensive school in the southeast of England. I organise STEM activities within my own school, and also am heavily engaged in developing STEM in our local primary feeder schools.

Our STEM curriculum is heavily directed by the Department for Education, and there is little potential for developing exciting and practical schemes of work. Vocational education has been heavily cut in recent years as the government puts more and more emphasis on achievement in English Baccalaureate subjects.

It continues to disappoint and frustrate me that our approach to the vital challenge of introducing engineering into schools remains largely amateur in nature. As a STEM leader, I try to encourage engagement, but sometimes struggle to see where engineering fits in. It does not have a discrete place in the school curriculum and exciting resources are few and far between. For example, I recently arranged for an outside body to run an engineering day for 60 of our Year 9 students.

The students were enthusiastic to begin with, but as the event progressed I could sense their disinterest and deterioration in behaviour. The projects were to be built essentially from scrap - bits of dowel, paper cups, masking tape, etc. The majority of projects didn't work, and it was frustrating to see the final products. Is this the image that we want our students to have of engineers - that they produce stuff from scrap that doesn't actually work?

To produce increasing numbers of well qualified engineering students in the future,we need to seriously address how we portray engineering to our children. We need to:

• have a planned approach to the teaching of engineering throughout the 5-18 curriculum (just as we are now starting to do with computing) - it is of no use to rely on an adhoc approach.

• produce engineering kits that students can use, develop and eventually create working models – and move away from the idea that engineering involves masking tape, glue guns and dowelling.

• develop a network of effective STEM teachers who can go into schools and help colleagues to present exciting engineering projects – I work closely with a number of STEM ambassadors and I really appreciate their efforts. However, they are not teachers, and very few have the ability to engage and enthuse children effectively.

I offer these thoughts as constructive commentary. I am passionate about the STEM agenda and I thoroughly enjoy engaging with students of all ages. However, to deliver a truly successful engagement with engineering, we urgently need some properly funded, joined-up thinking between industry and schools. 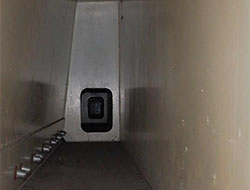 In the article The Falkirk Kelpies (Ingenia 60), it is stated that Huck bolts have been rarely used in construction. This is not strictly correct. For many years, they have been used in railway bridge structures to allow rapid construction. In particular, the standard design of box girder rail under bridges used Huck fasteners to connect floor units to the box main girders within the time restraints of erection during limited track possessions. The connections involved personnel being required to work in the confined space of box girders, and Hucktools were easier to use with fewer noise problems than with other equipment.

The standard box designs were evolved by British Railways from about 1960 and the designs, although updated since, now form part of a suite of Network Rail standard bridge designs. The two images alongside show a standard railway box girder bridge, built near Settle, Yorkshire in the 1990s, and an internal view of a box girder showing Huck fasteners.

What struck me about the Falkirk Kelpies was the combination of the scupltor's superb artistic flair coupled with ‘state-of-the-art’ structural engineering. The complex curved shapes of the horse heads have been formed from over 9,000 individually shaped stainless steel plates attached to an internal supporting steel framework. The use of Huckfasteners to both curve in three dimensions what were flat plates to the desired shape by the tightening procedure to fix them was particularly intuitive. The end result is a skilled mix of artistic and technical judgement that achieved the desired lifelike visual effect of wild horses that will surely bring a huge amount of visitors to Falkirk to see them.

Scott Steedman, in his editorial Steering into unknown territory (Ingenia 60,) raises interesting questions worth exploring further about what happens in the event of accidents involving autonomous vehicles.

Firstly, all autonomous driving systems record events going on around them in some detail as an inherent feature of their operation. Of course, this feature does not require autonomy – many cars and other vehicles, even bicycles, already have recording GPS/video/tachometers because of the advent of small, low-cost, recording video cameras and sat navs. Cars, buses and commercial vehicle fleets will record such data as part of insurance deals or because of automatic emergency accident call systems in development, such as ‘eCall’. So the doubt that enabled people to claim all sorts of things at variance with reality after an accident event is already fading. This is bad news for some but good for many. If an accident happens involving an autonomous vehicle, it will be known exactly how and why it happened.

Secondly, concerns over who might be responsible if a wholly or partly autonomous vehicle caused an accident were discussed at length by the autonomy study group for the Royal Academy of Engineering, of which I was part, a few years ago. At first, this seemed a key issue, but the closer we looked at it, the more the issue went away! For example, engineers are of course already responsible for the safety of vehicles (jointly with the driver) in the case of those (rare) accidents that might have mechanical causes. And in the case of wholly or partly autonomous vehicles, things seem to be no different.This is especially true as autonomy will arrive gradually, starting with super-cruise,self-parking and collision avoidance (which are already here). So this is a bit like the old ‘seat-belts-can-kill-you’ debate. Indeed, there may be a debate sometime far off about the safety of allowing hand-driven instead of safer automated trucks on the road!

When will cars drive themselves?

There are many claims made about the progress of autonomous vehicles and their imminent arrival on UK roads. We look at the engineering behind these predictions

The FlexiArch was developed and launched in 2007, creating a minor renaissance for arch bridges.