HOW DOES THAT WORK? - Accelerometers 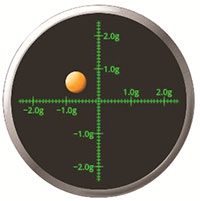 Whether measuring the severity of an earthquake or movement of an airliner flying through turbulence, accelerometers have become embedded into everyday consumer products. These electromechanical devices detect forces that may be static, like the force of gravity, or, as used in many mobile devices, dynamic to sense movement or vibration.

Developed around 1927 for the US military, the first accelerometers utilised suspended carbon discs coupled to a Wheatstone bridge (a potentiometer) to detect movement. These were bulky items, weighing half a kilo, sensitive to temperature changes. Today’s accelerometers are much smaller and most commonly make use of three piezoelectric sensors orientated at 90° to each other to detect movement in three axes. Piezoelectric sensors contain microscopic crystals which generate a small voltage when stressed due to accelerative forces. These signals are amplified and interpreted by software to determine the amount and direction of acceleration, and to trigger actions such as firing a vehicle airbag in a crash.

Accelerometers can determine whether an object is moving uphill or if it will fall over if tilted. Compass or stargazing smartphone apps use signals from the triple-axis accelerometer to detect where the phone is pointing and to switch the display between portrait and landscape mode when the device is tilted. Accelerometers in laptops can also alert the hard drive when a laptop is suddenly dropped, allowing it to safely park the read/write heads to avoid them hitting the spinning disc upon impact.

From an idea by Richard Walder

In advance of the 2015 general election, Ingenia invited the three largest political parties to explain why engineering is important to them

How to maximise loudspeaker quality