Dr Robert Langer FREng, an American chemical engineer at the Massachusetts Institute of Technology, has won the 2015 Queen Elizabeth Prize for Engineering (QEPrize). The QEPrize is an international £1 million prize that celebrates the engineers responsible for a groundbreaking innovation that has been of global benefit to humanity. Its objective is to raise the public profile of engineering and to inspire young people to become engineers. The announcement was made at the Royal Academy of Engineering in the presence of HRH the Duke of York in February.

Dr Langer’s work in the medical and surgical fields made him a pioneer in bioengineering, drug delivery, tissue engineering and nanotechnology. He is an acclaimed inventor and the most cited engineer in history, with 170,000 citations, over 1,000 issued and pending patents and 1,300 published articles. 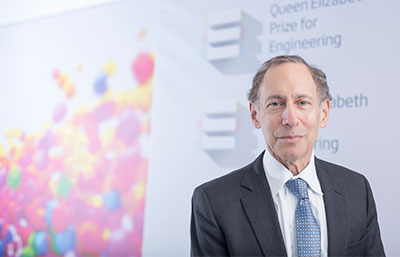 An international panel of judges, chaired by Lord Alec Broers FREng FRS, reviewed nominations for world-shaping innovations from around the globe. Their deliberations led them to award the QEPrize to Dr Langer’s technologically disruptive advances in controlled-release drug delivery systems. This innovation has utilised his team’s work at the intersection of new materials synthesis and applied engineering.

At a time when few engineers worked in experimental medical research, Dr Langer found solutions for problems that would usually require surgery. His team developed a method for large molecule drug delivery and changed the way that materials are used in medicine.

Langer’s work has been the basis for numerous innovations, including long-lasting treatments for cancer, schizophrenia, diabetes, and heart disease. Researchers have extended his original research into fields as diverse as agriculture and nano-medicine. In leading the largest biomedical engineering lab in the world, he has also directly impacted the lives of over 800 students infields ranging from medicine to electrical and chemical engineering to physics and chemistry. Nearly 300 have become professors, and many lead companies around the world. It is estimated that two billion lives have been improved by technologies from his lab to date. Visit www.qeprize.org to read more.

A series of short videos entitled Born to Engineer have been produced to show how engineers across a range of disciplines use imagination, creativity and problem-solving skills in their work. The videos, featuring some of the UK’s brightest young engineers, aim to inspire young people to become engineering stars of the future. 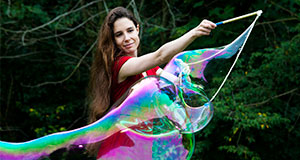 Dr Eleanor Stride, Professor of Engineering Science at the University of Oxford, uses the properties of bubbles to design new cancer treatments

Sports engineer Sam Fraser uses his knowledge of mechanical engineering to choose materials for high performance football boots, and then tests them, using finite element analysis, in his lab at Loughborough University. Young inventor George Edwards explains how, while studying for A-levels, he was inspired by his teacher’s complaint about not being able to monitor the level of gas inside a gas cylinder for a caravan stove. Edwards took on this challenge, and designed a thermal sensor that determines the level of gas available and can be accessed by a mobile phone app.

Two of the engineers featured in the videos are supported by the Royal Academy of Engineering. Dr Andrew Robertson is a computer software engineer who has designed a system to allow bands to drive the tempo of their live music performances, without depending on a click track.

Dr Eleanor Stride creates micro-bubbles to carry cancer drugs through a patient’s bloodstream. Her treatment approach magnetically guides the micro-bubbles to the site of the cancer, and then uses ultrasound to burst them, releasing chemotherapy treatments. This localised treatment could avoid the widespread destruction of healthy cells that is unavoidable with present treatments.

The video appears on Engineering Insite, a website produced by the ERA Foundation to explain engineering careers and the routes into them for young people, teachers, parents and careers advisers – www.engineeringinsite.com/videos

In September 2014, a team of student engineers from the School of Engineering at Cardiff University delivered an electrification upgrade project in Shiyala Village, Chongwe, Zambia. They worked with Mothers of Africa, a charity set up by Professor Judith Hall of University Hospital Wales, which trains medical staff in sub-Saharan Africa to care for mothers during pregnancy and childbirth. 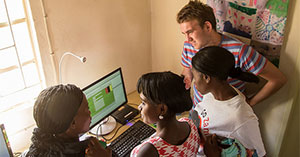 An undergraduate engineer helping local school teachers to set up an attendance spreadsheet on one of the low-power computers © Media Resources, Cardiff University

A team from Cardiff University originally installed a smaller power supply for a computer classroom in 2012. In 2013, the team extended the system to provide 230-volt AC power to the surrounding buildings in the village, including the village health post and the house of the local nurse.

The 2014 visit greatly expanded the system to provide power for new loads added by the community over the two years since the inception of the project. The system uses 12 polycrystalline solar modules of 280 W peak each, charging eight deep-cycle lead-acid batteries of 220 Ah each. The student team also installed additional lighting and sockets in the health post maternity ward and, at the community’s request, external security lighting for the main buildings.

Dr Dan Rogers, who led the project, feels that exposing engineering students who have settled into a routine of structured and precise, clear-cut lectures to the unpredictable challenges of the real world is one way that modern engineering courses are evolving as student demands increase. The project involved students across all engineering disciplines who performed the detailed electrical design of the solar installation and microgrid, the mechanical design of a lightweight, rapid assembly solar panel mounting frame and design of the concrete solar panel mounting plinth. The village’s medical complex is now fully electrified and student-led workshops for villager shave ensured that the solar powersupply can be operated and maintained locally. Read more at: tinyurl.com/l2p5dyj

The Royal Academy of Engineering launched two new science, technology, engineering and mathematics (STEM) learning and teaching resources in February 2015. Smart Skin and How to make your own hovercraft provide secondary school students and teachers with chances to apply their STEM knowledge and skills to engineering contexts. 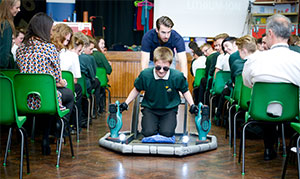 Since 2009, over 14,000 copies of the Academy’s STEM resources have been downloaded. They can be found at tinyurl.com/m535fzz. The most popular of these is a resource that investigates the lifesaving role of engineers after natural disasters. The two new resources continue this work and cover STEM topics and themes that feature in the UK national curriculum.

Smart Skin has been created to support the 2015 BAE Systems and RAF Schools Roadshow, and highlights a development in the use of wireless sensor networks to monitor the surface of aircraft. Motes, tiny sensors little bigger than grains of rice that can transmit data about the aircraft’s skin and its environment, are at the heart of this technology. One day, networks of wireless motes may be used for the early identification of structural fatigue in aircraft or even to help them fly. Smart Skin provides an insight into how science topics from the school curriculum influence the latest technology and includes relevant mathematical challenges for students.

How to build your own hovercraft is the second STEM learning resource the Academy’s education team has created to support Bosch’s annual All Around You roadshow. During the roadshow, students are shown a demonstration using two cordless leaf blowers to create a personal hovercraft, which students get to try out. The resource looks at the STEM knowledge and skills needed to make a hovercraft and challenges students to calculate how much pressure needs to be created to lift the craft and its pilot.

Findings from the European Space Agency’s Rosetta project are revealing new information about the composition of Comet 67P/Churyumov-Gerasimenko. The long-standing theory that most water on Earth came from comets may have been shaken by the Philae lander which touched down in November 2014. The water on icy 67P is unlike that on Earth, leading to speculation that it is more likely that the Earth’s water came from asteroids. The Visible, Infrared and Thermal Imaging Spectrometer (VIRTIS), partly developed by a team at the University of Oxford, has provided evidence of carbon-bearing compounds, which are necessary for life, but very little water, on the surface of the comet’s nucleus. 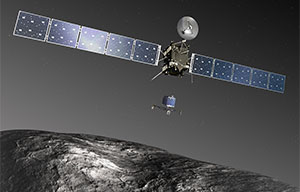 OSIRIS, Rosetta’s on-board camera system developed with researchers from the University of Kent, has been able to take high-resolution images of 70% of the comet’s surface so far. It has defined five types of terrain: dust-covered; terrains made of brittle materials with pits and circular structures; large-scale depressions; smooth terrains; and exposed, more consolidated, rock-like surfaces. While a few ice-containing areas are exposed on the surface, the comet’s icy core appears to lie beneath a thick, mostly dusty crust.

The Philae lander is currently ‘sleeping’. Assuming Philae survived landing in its new residence, the earliest that the lander team expect it to boot up is in late March. But it is likely to be May or June before there is enough solar illumination to use its transmitter, and to re-establish a communications link with Rosetta – the lander needs about 17 W to wake up and link with the mothership. Rosetta will continue to follow the comet at close range as it approaches its closest point to the sun in August 2015, and then until its mission ends in December.

The Institution of Structural Engineers has awarded Pell Frischmann the 2014 Structural Heritage Award for its work in helping restore the Forth Rail Bridge. The Victorian bridge spans the Firth of Forth outside Edinburgh, and is the second largest cantilevered bridge ever built. The bridge, completed in 1890, is being considered for UNESCO World Heritage Site status, with the announcement being made in June 2015. 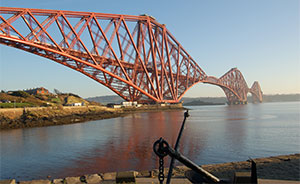 Pell Frischmann has worked for 16 years on the restoration, beginning with a programme of research to determine the most long-lasting restoration techniques. Pell Frischmann and client Network Rail began with an in-depth condition survey of the original structure, using rope access where required. To monitor corrosion loss, they then weighed and attached ‘test’ plates to the bridge, along its length and at different heights. These were removed at predetermined intervals to be cleaned and re-weighed over a four-year period, with selective six-monthly checks for damage.

These data were used to prioritise the proposed restoration works and prove that the bridge could take the additional load from the temporary works. Finite element analysis and three dimensional computer modelling proved that the bridge was strong enough to withstand repairs. The work was carried out inside weatherproofed enclosures, where the existing paint system was stripped back to bare metal and replaced with a modern, high-tech glass flake epoxy system that had been tried and tested on oil platforms, but not used before on bridge infrastructure.

The bridge has now been completely recoated - the first time in a single operation since its construction and remained operational during the works. Independent trials carried out by Network Rail verified that the top coat will last for at least 20 years - putting an end to the myth that painting the bridge is a never-ending task.

See also Restoration of the Forth Bridge in Ingenia 49 - http://tinyurl.com/np8bzhg

How to maximise loudspeaker quality

Welsh startup Sure Chill has developed a cooler that uses the properties of water to keep its contents cool for around 10 days without electricity. This is ideal for storing items such as vaccines where electricity sources are unreliable

HOW DOES THAT WORK? - Accelerometers