The Africa Prize for Engineering Innovation was launched by the Royal Academy of Engineering in 2014, to celebrate innovation and help promote entrepreneurship in sub-Saharan Africa. It rewards ambitious and talented engineers from all disciplines to develop scalable solutions to local challenges. 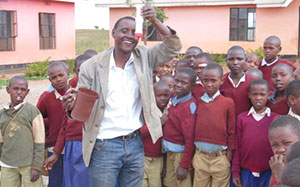 A shortlist of 12 applicants, whose entries covered a diverse range of innovations, spent six months undertaking entrepreneurial training before submitting their revised applications to the judging panel. Academy Fellows, supported by experts in Africa, offered mentoring in the development of the shortlisted businesses. 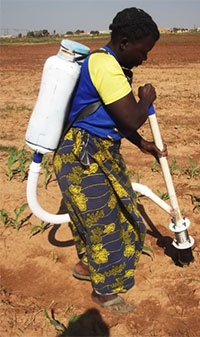 In April 2015, the judging panel selected the finalists at the final event on 1 June 2015 in Cape Town, South Africa. The winner received £25,000, and runners-up £10,000 each. Initially, three finalists were to be selected, but the standard of entries was so high that the following four finalists were chosen: Chura, Kenya, offering interoperability between mobile networks; Fencesitter, South Africa, offering a warning system for farmers in case of fence tampering or damage; Nanofilters, Tanzania, integrating nanotechnology and sand-based filtration for safe drinking water; and Spot fertiliser applicator, Zambia, with a precise fertiliser applicator for small farmers.

Applications for the second year of the competition close on 29 June 2015 and more information can be found online: www.raeng.org.uk/AfricaPrize

These innovations were selected with the Royal Academy of Engineering. They were chosen, in part, to show how many different fields have been transformed by radical new technologies, including computing, materials science, civil engineering and health and medical sciences. The Colossus computer has a special connection with the Royal Mail: the world’s first electronic, digital and programmable computer, it was designed and built by General Post Office (GPO) engineer Tommy Flowers and his team at the Post Office Research Station in northwest London.

By December 1943, Flowers and a team of engineers, scientists and technicians had completed the first five-tonne Colossus machine, which used several thermionic valves to process calculations. This became operational at the Government Code and Cypher School at Bletchley Park.

It took decades for the information to be declassified, and for Colossus to be acknowledged as the world’s first electronic, digital and programmable computer. The new stamp includes a representation of the ticker tape that inputted data, and on it is the symbolic word ‘PEACE’.

Royal Mail vans in locations linked to the inventors will feature images of the stamp. See www.royalmail.com/inventivebritain

Engineers are to be given the opportunity to engage the public in innovative new ways thanks to 22 new projects funded through the Royal Academy of Engineering’s public engagement grant scheme, Ingenious.

Ingenious supports projects across the UK that creatively engage the public with engineering. Among the projects funded this year is the University College London Engineering Exchange, which aims to provide local communities with access to engineering expertise. Run by Dr Sarah Bell, the project will develop and deliver a training programme for engineers before supporting them to work on three engineering projects requested by their local community. 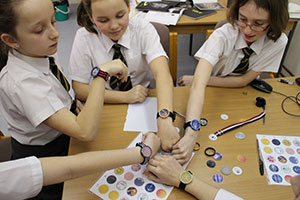 Children displaying their finished items at a Watch it Made workshop

Watch it Made, a project run by Cranfield University, brings children into manufacturing learning studios, containing tailored precision engineering small-scale computer-controlled machine tools. These machines are adapted and operated through simple design and manufacturing CAD/CAM software so that 12- to 14-year-olds without training can learn about manufacturing processes and design, fabricate and assemble the major components of a precision-engineered watch. Also funded this year is Guerilla Science, who will work with musicians, construction and acoustic engineers to design, prototype and build a fire organ. A multi-pipe version of the Ruben’s tube, the fire organ will visualise sound as flames, allowing the public to explore music, motion and engineering principles.

Other projects funded this year include artist-engineer collaborations, robotic workshops for schools and a project run by Jodrell Bank to engage the public with the Square Kilometre Array radio telescope project. Ingenious is funded by the Department for Business, Innovation and Skills. A full list of projects funded by the scheme this year can be found at tinyurl.com/pdfh4r9

The Women’s Engineering Society (WES) is celebrating the second National Women in Engineering Day on 23 June. The day aims to raise the profile and celebrate the achievements of women in engineering, and encourage girls and women to pursue engineering careers. Employers, schools and colleges, women engineers and professional engineering institutions hold events to celebrate, such as encouraging women engineers to give talks in local schools, organising women’s networking events, or opening up engineering workplaces for student careers visits. 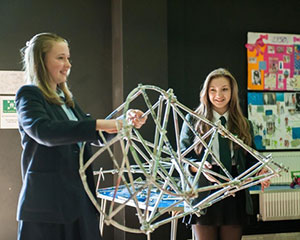 This year, WES has developed an outreach activity for schools. Magnificent Women and their Flying Machines combines practical engineering and research activities. Students learn about aircraft design and flight mechanics while working in project teams to build a STIXX aircraft wing replica. They are also asked to research the history of prominent women in aerospace and aviation over the last 100 years before meeting a practising woman engineer and discussing career options.

The day is supported by Airbus, Santander, and the Royal Academy of Engineering. More information and resource packs can be found at www.nwed.org.uk

A new website that aims to help young people make informed choices about careers in manufacturing was launched in April. The Made Here Now site was developed by Peter Marsh, the former manufacturing editor of the Financial Times, with the aim of demonstrating that a strong manufacturing sector is essential for the UK’s continued economic growth needed to be made.

The website is supported by a group of 47 UK engineering companies, universities, trade bodies and advocates for manufacturing, including the Royal Academy of Engineering. 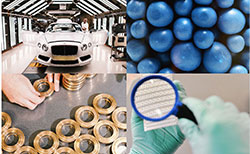 The site features case studies of companies that are leading the revival of UK manufacturing are featured on the website including AES, the South Yorkshire-based manufacturer of mechanical seals, with 90% of its manufacturing done in the UK and a global turnover of £142 million in 2014. Plessey Semiconductor, based in Plymouth, collaborates with engineers from the University of Cambridge to deliver advances in materials and electrical engineering. A smaller-scale success is FormFormForm, the London start up company behind Sugru, the multi-purpose silicone polymer that was featured in an Innovation Watch article in Ingenia 54.

In the UK, the decline in manufacturing has been sharper than in most industrialised nations. Between 1970 and 2013, the share of manufacturing in UK output, measured at current prices, fell from 27% to 10%. Made Here Now and the companies supporting it are aiming to highlight this trend and showcase the companies that are helping to reverse it. 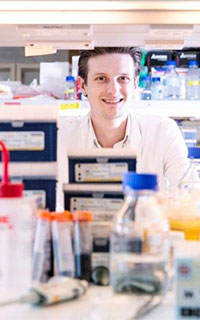 The Royal Academy of Engineering’s Enterprise Hub has awarded seven UK researchers up to £85,000 of funding to develop spinout companies based on their innovations. The Hub also provides training and connects each Enterprise Fellow to a mentor from the Academy’s Fellowship, to guide them through the early stages of business development. Volunteer mentors include some of the UK’s leading technology entrepreneurs, such as Dr Mike Lynch FREng, co-founder of Autonomy, and Sir Robin Saxby FREng, former chief executive of ARM.

The seven companies include Dr Stephen Hicks’ spinout from University of Oxford, VA-ST, which is improving vision for the sight impaired. Stephen and his team have developed a non-invasive visual display that can be worn like glasses to enhance the usefulness of residual vision.

Another researcher, Dr Nicola Irwin, has set up a company, Uroglide, to develop a new coating technology to ease catheter insertion and reduce damage upon removal, improving the patient’s experience. Uroglide is expected to save medical personnel time and make a life-changing difference to the dignity and health of patients.

The Academy’s Enterprise Hub helps fund technology entrepreneurs to make the leap from a research to a commercial setting. It also provides management training that includes enhancing communication, marketing and team management skills.

The Enterprise Hub has already seen outstanding success from Enterprise Fellows of previous years. Beyond start-ups, the Hub continues to introduce and expand its programmes to support SMEs at every stage of their lifecycle.

Professor Paul Newman FREng of Oxford Mobile Robotics Group and Neil Fulton of the Transport Systems Catapult talked about their work developing driverless cars. Professor Newman spoke about the wide range of challenges faced by engineers when trying to get a car to function independently and the complex mapping techniques needed. The group’s Robotcar, built from a modified Nissan Leaf, does not rely on GPS but combines a semantic model of the local environment and static obstacles, such as traffic signs, with lasers mounted beneath the vehicle for 3D scanning of the local environment, and detection of dynamic obstacles such as other cars. 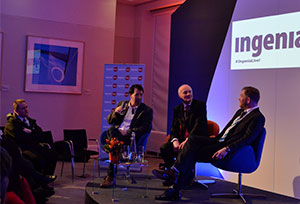 Neil Fulton’s talk focused on the challenges faced by engineers, lawyers, governments and planners when implementing driverless vehicle technologies. He also discussed the upcoming LUTZ Pathfinder pod programme which will see an initial trial of three driverless pods operating in Milton Keynes later in 2015. The pods will carry two people, reach a top speed of 24 mph, and contain a manual override with steering wheel and pedals and an emergency stop button accessible by both occupants.

The evening was chaired by Dr Scott Steedman CBE FREng, Editor-in-Chief of Ingenia magazine, and was attended by over 100 guests, many of them early‑career engineers and undergraduates. The theme was inspired by the article When will cars drive themselves? published in Ingenia 61, and the many follow-up letters that featured in the following magazine and in this issue.

The next Ingenia Live! will take place in November.