The winner of the Institute of Engineering and Technology’s 2014 Innovation Award was a handheld portable device for detecting faults in low voltage electrical cables. EA Technology’s CableSnifferTM uses a probe and chemical sensing technology to identify faults saving energy companies millions of pounds each year. 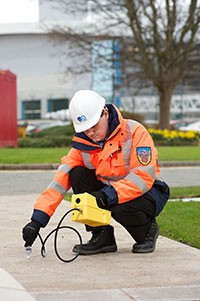 Approximately 40% of cable faults are caused by mechanical excavation works, and can be found by identifying the site where the digging took place. 10% of cable faults are caused by land slippage or other disruption of the cable, and the remaining 50% of faults are caused by failure in the cable joints. If no obvious cause of mechanical disruption can be found, fault teams use echolocation to find a failure in the cable. Local substations then send a pulse down the cable identified as the source of the failure, and then, based on the time for the signal to reflect from the fault site, approximate the location of the fault.

Traditional echolocation has drawbacks as a diagnostic tool: it is only accurate to within 10% of the distance from the substation. The average fault is 100m from a substation, leaving a 10m stretch of cable where the fault could have occurred. Any branching in the cable would lead to several alternative locations of the fault. By identifying customers without power, repair teams can narrow these possibilities, but this is not always possible and it can take several exploratory excavations to find the fault. At a cost of £1,000 each time, it can be days sometimes before power can be restored.

Before excavating, CableSniffer identifies faults in low-voltage cables by determining the chemical signature of gases that are emitted by the burning of cable sheath insulation when a cable fails. Field engineers insert a handheld probe into a series of 8mm boreholes along the length of the cable where the fault has been identified. The gases produced are then sampled at each point along the cable. The highest concentration of gases will be those nearest to the fault. Faults can usually be located in under an hour, with accuracy better than one metre, eliminating the need for multiple exploratory excavations.

All six of the UK’s major electricity companies have adopted the technology, saving an estimated £154 million a year in engineering costs.