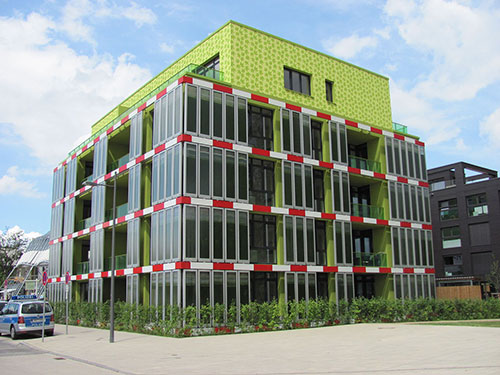 The vertical glass louvres of the four-storey Hamburg apartment block have been filled with water and nutrients through which microalgae circulate, converting daylight and CO₂ to biomass and solar thermal heat through photosynthesis © Colt International, Arup Deutschland and SSC Strategic Science Consult

The establishment of zero- or even surplus-energy buildings is a goal that has been set for sustainable architecture. An apartment block in Hamburg in Germany has been built that uses microalgae placed within its façade to generate heat and biomass. Jan Wurm, an associate director at Arup, was one of the chief designers of the energy system. He talked to Jill Entwistle about the concept, execution and results from the world’s first photobioreactor.

Hamburg’s Bio Intelligent Quotient (BIQ) four-storey residential building is green in every sense. Not only is it energy efficient, promoting several environmental benefits, but its patented SolarLeaf façade, made up of 129 photobioreactors (in the form of glass panels filled with water and algae), ensures the building’s exterior appears distinctly green in colour.

The SolarLeaf system is the world’s first full-scale working version of a bioreactor façade – co-developed by the Berlin office of engineering consultancy firm Arup. Built in 2013, it recently beat 355 other entries to win the Applied Innovations category of the Zumtobel Group Award 2014, organised by the architectural lighting multinational.

From 2020 onwards, zero-energy houses will be obligatory in Germany – every new building will need to produce the same amount of energy as it consumes. This project wanted to exploit the storage advantages of biomass: a solar energy-generated heat source that does not need batteries. It was part-subsidised by the German federal research Zukunft Bau (future building) initiative, with Arup developing the system in collaboration with the biotechnology and microalgae company Strategic Science Consult, and Colt International, a specialist in integrated climate control, ventilation and solar shading systems. 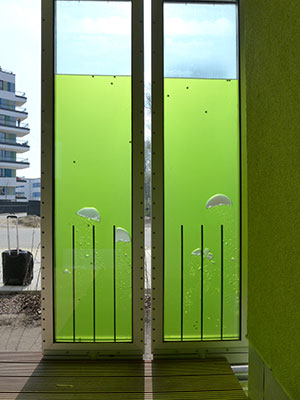 Microalgae are sourced from the River Elbe nearby and cultivated in the glass elements that make up the 15-unit building’s bio skin. This is used to produce heat and biomass, as well as control light, provide shade and absorb CO₂ emissions. The sides of the building that face the sun have a second outer shell set into the facade itself, in which the microalgae reproduce. With the aid of sunlight, the algae can photosynthesise and grow.

One of the advantages of using microalgae is that their simple, unicellular structure enables the rapid production of biomass. In larger plants, not all cells contribute to photosynthesis, but because microalgae have a single-cell structure they put all their effort into the process of converting light into chemical energy. This means they grow around 10 times faster than larger plants.

The 200 m² system facade is fitted as a secondary structure on the southwest and southeast elevations. It comprises clusters of three to five transparent glass containers, each 2.5m tall and 0.7m wide, known as flat panel photobioreactors (PBRs). These contain water and nutrients, through which the microalgae circulate, absorbing light and carbon and producing biomass.

The PBRs are linked in a closed loop to the building’s plant room, where they are fed with carbon from combustion processes in the vicinity. The inputs and outputs are monitored by the building energy management system, which controls the supply of nutrition and harvesting of the algae at the interface with the building services system. The algae content and the medium’s temperature level are also monitored.

The part of the solar spectrum that is not absorbed by the algae – between 400 and 700nm, or visible light – heats the water. This solar thermal heat is removed – for a stable production rate the temperature is kept below 40° C – and either used in the building or stored for when it’s needed. 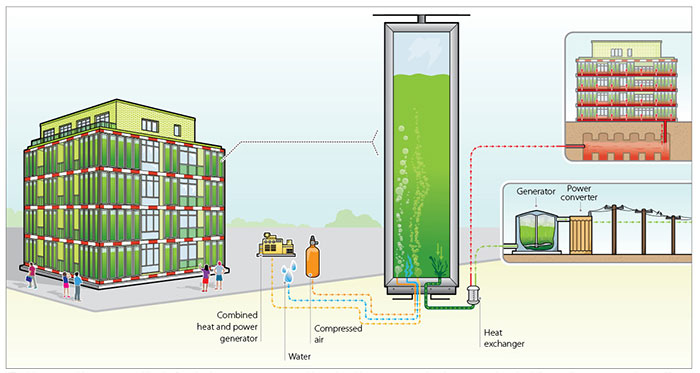 The biomass and heat generated by the façade elements are transported by a closed loop system to the plant room, where both forms of energy are exchanged by a separator and a heat exchanger respectively. The temperature levels of the heat generated can be increased by using a hot water pump for the supply of hot water and for heating the building. Excess heat can be stored by use of a geothermal system © Brown Bird Design

The algae flourish and multiply in a regular cycle until they can be harvested. The microalgae are harvested continuously or in batch mode through a bypass with a floatation device, where the algae are automatically skimmed off using a vertical cylinder. The harvested algae are used in various research projects, with the goal of establishing a solid value chain for the pharmaceutical and the food industries.

Over the past two years, the technical and energy performance of the system have been subject to intensive monitoring. The combined output of heat and biomass is 26,165kWh a year (heat: 21,626kWh, plus biomass: 4539kWh) and electricity consumption is 13,471kWh. From the net heat gain, approximately 500m² of usable floor area of the BIQ house – designed as a passive house - could be provided with heat every year.

The energy conversion rate of sunlight into heat is 21% and into biomass is 4%, approximately half of what was modelled at the design stage. Monitoring identified that the main reason the system could not operate to design specification was due to the insufficient diameter of some of the ductwork connecting the photobioreactor. This caused some ducts to clog, limiting the fill head of the panels and therefore reducing productivity. A retrofitting measure will be completed by the end of September 2015 to enable the system to function at the designed capacity.

Whether a building with algae bioreactors is the start of something big or amounts to a one-of-a-kind experiment remains to be seen. The use of microalgae in facades has been considered in recent years by the Institution of Mechanical Engineers and architectural practices such as HOK have produced concept designs. There has been interest from a German science and industry client to retrofit a plant with algae power, although expense is an issue, as it currently costs more than solar or conventional fuel systems.

Prices are coming down, however. According to Wurm, earlier concepts were all based on tubular glass bioreactors, in which water and algae circulate through a meandering transparent tube to absorb light and carbon, a costly and maintenance-intensive type of system. The flat panel reactor should ultimately prove more viable. It is more efficient in terms of both output and maintenance – pressurised air is injected at the bottom of the panel and the turbulence created by rising air bubbles stimulates the absorption of carbon and light, while also ‘washing’ the panel clean from the inside.

The key to the development of photobioreactors will be multidisciplinary cooperation. As with most nascent technologies, their implementation will require the combination of different systems and skills including façades, simulations, mechanical and structural engineering, and control systems. If these can be accommodated, then algae power may gain traction in a significant way.

Jan Wurm is an associate director of Arup, based in the company’s Berlin office, and research leader for Europe. Before joining Arup in 2005, he was assistant professor for structural design in the Faculty of Architecture at Aachen University.

Ingenia is grateful to Lighting (Illumination in Architecture) magazine for allowing it to use parts of its articles Why this bubbling green slime is the future of windows - www.lighting.co.uk

John Milton is the director of the Archway Project, having previously worked with the Youth Justice Board and Prison Service. He explains what the charity does to help reduce anti-social behaviour and improve employment prospects.

The Silver Medal award was established by the Royal Academy of Engineering 22 years ago to recognise outstanding personal contributions by early- or mid-career engineers that have resulted in successful market exploitation.