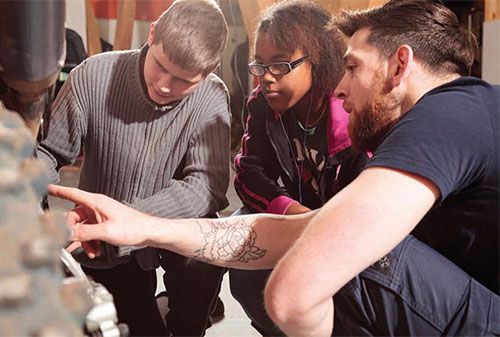 Archway aims to divert young people away from crime, reduce reoffending and provide skills and qualifications. Neil (right) had stolen motorbikes and been excluded from school before he was 14. He began attending the Archway Project on Wednesday evenings and found that he was good at motor bike maintenance. Neil’s confidence and behaviour improved, he became a member of staff in 2003 and is now Archway’s Operations Manager

Hundreds of youth centres have closed over the last few years as local councils cease funding initiatives that they have no legal obligations to maintain. The Archway Project is one independently-funded local scheme that has kept going and is expanding its engineering-based programmes by providing BTEC certificates and diplomas. John Milton is the director of the Archway Project, having previously worked with the Youth Justice Board and Prison Service. He explains what the charity does to help reduce anti-social behaviour and improve employment prospects.

The Archway Project is a registered charity based in Thamesmead, London SE2, one of the most deprived areas in the UK, with high levels of crime. The director Stanley Kubrick used the area to film the most brutal scenes of juvenile gang violence in his film A Clockwork Orange (1971). Ten years after filming, the Archway Project was set up in response to the problem of anti-social behaviour by young people in the area.

The problem is still severe. Many young people, for various reasons, feel themselves to be excluded from society. Having poor literacy and numeracy skills, they usually leave school without any qualifications and have often experienced unsatisfactory relationships with social services departments and the police. Regarded as authors of their own destiny, they generally evoke more condemnation than sympathy. Archway uses engineering to give them a second chance and now record numbers are turning up in the evenings to try out the mechanical and computer skills being developed there.

Young people are usually referred to the project by social services departments or youth offending teams after having been in trouble of some sort. The first challenge is to attract them sufficiently to overcome their negative attitudes to learning. This is done by offering an experience attractive to many youngsters, off-road motorbiking. Every six weeks, all those signed up are taken out for a day’s riding in the countryside. In return for being taken on this extremely popular activity, the young people are expected to show good attendance, behaviour, academic application and teamworking.

Once they have engaged with the project, it is hoped that they will then be won over by Archway’s instructors, who are on their wavelength. Most of the young people also gain a novel experience: praise from an adult. This transforms their attitudes. In an apparent change of character, they do not now resent being told that they need, say, to clean the bikes after use.

This improved relationship is then used to encourage them to learn a technical subject – bicycle or motorbike maintenance – which they soon recognise to be relevant to their motorbike riding. This link between learning and application is also exploited more widely in Archway to increase the range of subjects now on offer, including computer skills for young people with autism.

When joining Archway, young people are often wary at first, but they gradually gain reassurance and begin to build enthusiasm and capability. They learn the need for rules and the benefit of teamworking. They are also encouraged to enter appropriate examinations and each has a personal development plan created, which includes their own needs and ideas. Crucially, they learn that with the support of the staff, they can have little excuse for failing to complete it. Many of the staff have also had upbringings in which they faced similar difficulties and underwent comparable personal development – see Aaron’s story.

Archway’s principal formal course is BTEC Engineering, which has three levels: ‘award’, which takes 12 weeks to complete; ‘certificate’, one academic year (36 weeks) and ‘diploma’, two academic years. As with Archway’s other courses, it is developed for people with poor literacy and numeracy skills. The students learn both mechanical and electrical engineering, applied to the motorbikes, as well as the more general use of hand tools and machine tools.

The Open College Network Motorcycle Workshop programme was used initially but was replaced by BTEC because it is recognised under the National Curriculum, so Archway’s vocational training now meets the requirements of Key Stage 4. It offers a clear progression to a level two course, a specialist qualification or an apprenticeship programme.

Archway needed to make the training more accessible for people who struggle in traditional academic environments and those with special educational needs. They did this by using tablet computers so that paperwork was dramatically reduced. Learners create work digitally and upload finished work to a cloud-based storage system.

In order to obtain the diploma, 37 ‘credits’ need to be passed. Each credit takes 10 hours of learning time. There are a wide range of engineering and electrical subjects covered, including wiring electrical circuits, welding and servicing electrical systems, as well as a number of subjects allied to obtaining meaningful employment. These include ‘Searching for a job’, ‘Applying for a job’, ‘Interview skills’ and ‘Planning an enterprise activity’. Since this changeover, there has been a dramatic increase in demand for places, and Ofsted has described the work as “fantastic”. 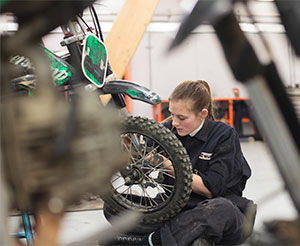 A one-term (12-week) course for 12 young people costs the charity £4,978. Archway raises its own finance so, in spite of it raising nearly 70% of overall costs, it does need to make a charge.

Most courses are provided at the Thamesmead base and are used by the young people of the boroughs of Greenwich and Bexley. In the last year, in partnership with a local special needs school, Archway has provided a new computer programming course for people with autism. Successful participants get formal BTEC qualifications as well as enhanced personal confidence, with a great associated lift to their employability.

During the past five years, Archway has raised over £1million, during which time over 1,000 young people have passed through and benefited from the project. For the upcoming school year starting in September 2015, over 100 young people will take the BTEC Engineering course. While gaining recognised qualifications is important, there are knock-on effects of improved behaviour and educational commitment.

Many young people struggle academically and prefer a ‘hands-on’ approach to learning. One of the major reasons that they end up excluding themselves from school or disrupt classes is the embarrassment factor of having poor literacy skills. Working with bicycles, motor bikes and computers has helped many youngsters to be less disruptive in their home lives and at school.

The Archway Project is perhaps an example for other areas that have similar problems. In the UK, the acronym ‘NEET’ refers to people aged 16-24 who are ‘not in education employment or training’. Youngsters likely to be in this category often have very localised focus both in terms of geography and outlook. Archway has worked in Thamesmead because it has researched local needs and developed programmes accordingly but the resulting structure could perhaps work elsewhere.

Responding to a widening reputation, transport facilities have now been acquired to enable equipment and bikes to be taken to other locations to support courses there, and this has been done recently in Kent, Barnet, Tower Hamlets, Bromley and Camden. Financing these initiatives has stretched Archway, but there is a demand and it is looking to see how to accommodate outside requests.

For more information go to www.archwayproject.org

"I’ve been coming to Archway Project for six years now. I was in year 7 and was in a lot of trouble at school. I was having a tough time and was swearing at teachers, fighting with students and sometimes fighting with teachers. I was basically about to be kicked out of school in year 7.

"It was my last chance and I had to have a meeting with the head teacher and the governors of the school. They said I should try going to the Archway Project. The deal was, if I behave at school, I can go and learn mechanics one day a week. 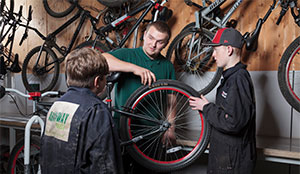 Aaron now teaches youngsters bicycle maintenance and repair so that they can obtain a BTEC certificate. This course meets one day a week for 12 weeks

"I still remember my first day. I was nervous and almost left before it started, but Chas [the senior project worker] showed me around and made me feel welcome. By the end of that day, I knew I liked it here and wanted to stay.

"I’ve learned a lot. I can rebuild engines, service cars and ride dirt bikes, but most importantly, I can now control my temper. In fact, I’m pretty chilled now. I became involved in something that interested me and I could speak with the staff when I needed to.

"If I hadn’t come here, I think I would have been kicked out of school and maybe worse. As it stands, I passed level two motorcycle mechanics [Open College Network Motorcycle Workshop], got six AQA certificates, gained five A-C grade GCSEs and have the choice of two colleges to take my level three motor mechanics course.

"I will never lose contact with Archway. I attend the community workshop each Wednesday evening and have recently started volunteering on Monday nights. It’s funny, because now I’m the person showing new starters around and making them feel welcome."

Professor Richard Godwin FREng explains how these initiatives can combine accuracy and control of field operations with an ability to sense the state of crops, leading to increased efficiency and yields.