Design and technology - averting a crisis

In September 2014, a revised national curriculum for D&T came into effect for five to fourteen-year-olds. Its development had been long and tortuous. It included an initial threat to remove the subject from the National Curriculum and a disastrous version, drafted by the Department for Education (DfE), which took the subject back to a make-do-and-mend craft activity from the 1950s. After much campaigning and lobbying, the DfE eventually tasked the Design and Technology Association and the Royal Academy of Engineering to provide them with advice on the new content. In the end, this advice was accepted and implemented with no significant changes.

So we have in place a D&T curriculum that, from age five, requires pupils to design and make products using a variety of materials, to take risks and demonstrate creativity and innovation, to work in a range of different contexts and to draw on disciplines such as mathematics, science, engineering, computing and art. In Key Stage 3 (ages 11-14), the curriculum specifies pupils should use computer-aided design and manufacture and have the ability to embed intelligence in the products they design and make by using programmable components. Currently, D&T GCSE and A-level qualifications are being revised to ensure a smooth progression for those pupils who want to continue to study the subject beyond age 14. 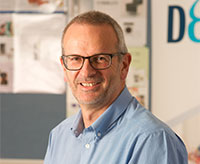 Dr Scott Steedman, in his editorial (Ingenia 59), and, in their letters in response, Professors Neil Downie and Kel Fidler (Ingenia 60) all considered the challenges of attracting the next generation of engineers. They talked about students who lacked a “feel for stuff” and curricula and societal attitudes that downplayed the importance of practical activity. They talked about maths and physics, but did not mention D&T. This is disappointing, but not surprising because, and this is the nub of the problem, D&T is a widely misunderstood and misrepresented subject.

For too many people, including ministers, employers, admissions tutors and parents, it is still perceived as the subject they probably studied when they were at school – woodwork or metalwork. In reality, it is the subject which can put the T and E into STEM and does it in curriculum time, not as part of extracurricular enhancement and enrichment activities. It is the subject that can help attract the next generation of engineers. This is not making a case for D&T to replace either maths or physics – far from it – but for many pupils it can provide a practically based route into engineering which contextualises and gives meaning to maths and physics knowledge.

But we have a problem, or rather we have a series of problems. Firstly, as already mentioned, the subject is often invisible. Ministers never refer to it when talking about STEM, and when they do talk about ‘technology’ they usually mean computing. Secondly, uncertainty about the future of the subject during the curriculum review has discouraged potential secondary D&T teachers from applying for initial teacher training (ITT) courses. By this September, there will be at least 1,200 fewer teachers in the system than are needed. That is a vacancy in every third secondary school. Finally, government policies and accountability measures are working against a broad and balanced curriculum to meet all pupils’ needs and interests.

For example, 61% of secondary schools and 15% of primary schools are now academies or free schools and do not have to teach the national curriculum. This means their pupils’ entitlement to D&T education is not guaranteed. Primary schools are judged on pupils’ performance in English and mathematics, which consequently take over 50% of teaching time, compared with 5% or less for D&T. Secondary schools are judged on pupils’ GCSE grades in English Baccalaureate (EBacc) subjects (English, mathematics, history or geography, science and a language). There is no incentive for pupils to study D&T, and in fact there is a disincentive for schools to offer it.

Up until 2004, D&T was a compulsory GCSE subject, but the loss of statutory status and current accountability measures have resulted in a 50% fall in D&T GCSE entries between 2003 and 2014. This has been further compounded by the recent proposal that no school will be considered as ‘outstanding’ by Ofsted from September 2015 unless all pupils study EBacc GCSEs – a further disincentive to offer D&T! Consequently, D&T is increasingly marginalised in many schools and, in a few, is being cut from the curriculum completely.

The irony is that this is taking place at a time when education officials from China, South Korea and other Southeast Asian countries are visiting the UK to learn how D&T is taught in schools here. They recognise that their curricula lack the design and creative problem-solving skills, linked to technical knowledge and practical making, that D&T provides. As one Chinese visitor remarked, “We want the back of an iPhone to say not just ‘Assembled in China’ but ‘Designed in China’ as well.”

How do we counter this perfect storm of problems? In September, the Design and Technology Association will be launching a campaign, Designed and Made in Britain …?, to raise awareness of these challenges and to propose actions to address them. In short, we believe the government must change its accountability measures to include a creative/technical subject for all pupils at Key Stage 4; address D&T teacher shortages through increased bursary incentives to attract the best entrants into ITT; and promote wider understanding of D&T, its contribution to STEM and to career paths in engineering and the creative industries.

We also believe employers can play a significant role by helping to highlight D&T’s value to government departments through their companies and professional institutions; by collaborating in developing real-life and relevant D&T activities and resources; and by helping D&T teachers engage with professional practice through work experience, internships and apprenticeships. The D&T community also has a part to play by ensuring the subject is modern, relevant and fit for the 21st century by providing CPD that improves and extends teachers’ subject knowledge, and by taking every opportunity to publicise D&T, and related careers, to parents, school management, including governors, and employers.

Unless we can achieve these changes, too many pupils will lose out on a design and technological education which is essential for life in an advanced technological society, and too many will miss out on the opportunity to have their interest in engineering careers awoken through practical designing and making activities. There is a lot to lose!

Richard Green taught D&T and was head of department in a London comprehensive school before working as a local authority adviser. He became Chief Executive of the Design and Technology Association in 2004, with overall responsibility for the services it provides to its 10,000 members.

For more information about 'Designed and Made in Britain...?' see: www.data.org.uk/campaign

The Silver Medal award was established by the Royal Academy of Engineering 22 years ago to recognise outstanding personal contributions by early- or mid-career engineers that have resulted in successful market exploitation.