Much of the UK’s existing building stock predates modern energy standards. Patrick Bellew of Atelier Ten, a company which has pioneered environmental innovations, suggests that a National Infrastructure Project is needed to tackle waste and inefficiency in the built environment and significantly reduce UK carbon emissions.

Whenever energy use in the UK built environment is discussed you will invariably hear some familiar statistics – that the existing building estate in the UK accounts for 40% of the carbon emissions in the UK and that 80% of buildings in existence now will still be there in 20 years’ time because buildings, particularly the houses and apartments that dominate UK real estate, tend not to be demolished and replaced. These stats highlight unnecessarily large numbers and inefficiencies in the built environment that need to be addressed. 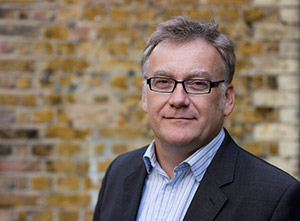 With very few exceptions, we know how to retrofit or modify buildings and systems to greatly improve energy efficiency through insulation, high performance glazing, LED lighting replacements and so on, and yet the pace of change remains extraordinarily slow. There are well-documented reasons for this – the inertia of disparate ownership, the large amount of rented accommodation (where the owner is not responsible for the energy bills) and the reality that the economics of energy savings through individual building upgrades do not represent the true cost to the UK economy once infrastructure upgrades to meet increasing demand are taken into account.

Reports and studies by authorities, from McKinsey’s global greenhouse gas abatement curve to the government’s own panel on climate change, are unanimous that these relatively simple measures represent the lowest cost route to reducing UK energy demand and carbon emissions.

So why isn’t energy efficiency retrofitting and renewable energy installation treated as a national infrastructure project? In addition to the energy and environmental gains, in the short to medium term this would be a sure-fire way to generate training and secure productive jobs for semi-skilled and skilled labour – quickly accessed and mobilised, and widely spread geographically across the UK. With five to seven million lofts and four to five million cavity walls to insulate along with seven to eight million solid walls there would seem to be enough work to support an industry – roughly 40,000 lofts per month between now and 2030 to clear the backlog.

Prior to 2012, in the domestic sector the Carbon Emission Reduction Commitment (CERT) and Community Energy Saving Programme (CESP) were relatively successful in implementing emission-reducing retrofits to residential buildings at zero or close to zero cost to owners.

Since 2012, and changes to funding structures when CERT and CESP were replaced by the Green Deal and Energy Company Obligations (ECOs), much of the momentum has gone out of the retrofit programme and capacity and many jobs have been lost in the industry as a result. In the early part of 2013, the Committee on Climate Change panel reported a 60% reduction in loft insulation projects compared to 2012 under the previous funding mechanisms. The current government at the same time is winding back its commitment to renewable energy projects in a move that is seriously damaging the previously burgeoning solar energy market.

The Green Deal grew out of a very logical idea brought forward by the construction industry through the UK Green Building Council that promoted Pay as You Save as a way of opening up the retrofit and renewable energy markets. However, interest rates for Green Deal plans were set at 7% by Treasury when the measure was introduced and this has proved to be a significant barrier to uptake, probably alongside fear of the bureaucracy and potential impact on home values (because the loan stays with the dwelling if/when it is sold).

For the domestic measure to have a chance of success, the Green Deal needs to be restructured to make the required building survey and report free to the building owner, funded through the ECO funds, and the interest rate needs to be close to or set at 0%. The funds made available for the Green Deal nationwide would also need to be significantly increased, with the benefits being returned in reduced demand on infrastructure in the long term and the return to the Treasury through tax and employment compensating. There seems little prospect of the current government driving this through unless there is a radical change in policy and the cause badly needs a champion.

The Government announced in July 2015, when the Green Deal was shut down, that it has commissioned a review led by Peter Bonfield OBE FREng to look at standards, consumer protection and the enforcement of energy efficiency schemes ensure “that the system properly supports and protects customers”. Four months on from scrapping the Green Deal and there remains a policy vacuum in the space where there should be a maelstrom of activity. Specialist businesses are closing their doors and the industry, such as it is, is losing the capacity and skills that it had begun to build. Why would you scrap an initiative like this without a plan in place to replace it?

At the same time as interest in efficiency and building performance is waning, certainly at government level, the belief that many of these performance problems and issues of our towns and cities can somehow be fixed through smart technology is very much on the increase – but smart technology and the Internet of Things alone will not achieve the reductions that are needed. Proponents of ‘smart city’ technologies prescribe a new layer, or perhaps you might call it an e-veneer, of digital management that will control and switch flows and operations of energy, water, traffic and waste to optimise performance and reduce emissions.

This seems exciting, much more exciting than the decades old message of ‘save it’, and I don’t doubt it can be very effective in making some improvements to operations and consequent reductions in carbon emissions. This technology could also work wonders for retrofitting projects. By harnessing the power of the internet to continuously monitor and track the improved energy performance of upgraded buildings, the financial basis for retrofit could be incentivised by rewarding measured success. This would provide a stronger foundation for increased private sector initiatives in this space through new types of funding mechanisms, as well as gaining a greater understanding of the actual performance benefits of energy efficiency and renewable energy retrofits. However, the issue still remains that it is the physical improvements to our buildings that will really deliver the emission reductions, not simply the application of ‘smart’ technology.

Unless we seriously set about fixing the underlying physically ingrained environmental deficiencies of the buildings that make up our towns and cities, we will never deliver the degree of adaption that we so badly need to avoid catastrophic climate change.

Patrick J Bellew RDI FREng is the founding director of Atelier Ten, which has pioneered environmental innovations in the built environment. He is one of the UK’s Royal Designers and is a Chartered Building Services Engineer with more than 30 years’ experience in the design of high performance buildings and systems. He was one of the founders of the UK-Green Building Council in 2007 and a member of the Task Force that established the Sustainable Training and Education Programme training programme in 2010.

Endomag’s Chief Executive Dr Eric Mayes outlines some of the challenges that surround the development and acceptance of medical innovations.

Coventry company Lontra has had a busy year.

HOW DOES THAT WORK? - Peltier devices

A discovery by French physicist, Jean Charles Peltier, was crucial for enabling these devices.