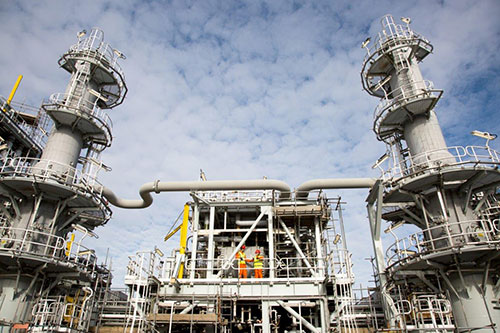 In February 2016, the Shetland Gas Plant, following £3.5 billion of investment was brought on stream by operator Total. It was reported to be the UK’s largest construction project since the 2012 Olympics. It will process natural gas from two huge gas fields lying around 80 miles north-west of the Shetland Islands, and supply as many as two million UK homes.

The project is the first in the UK to adopt a subsea-to-shore development concept that involves no offshore surface infrastructure. Gas condensate is extracted via subsea templates, one for each field, with tie-in connections positioned along two 18-inch flowlines that carry it to the Shetland Gas Plant. Once processed, the natural gas is then transported through an existing pipeline network to the mainland. 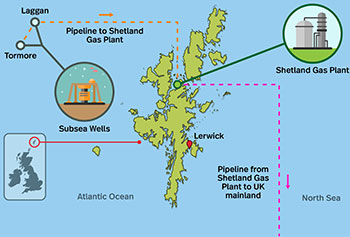 Close to 20% of the remaining oil and gas reserves in UK waters are believed to lie west of Shetland, which provides challenges for exploration and production companies as the area is not only subject to extreme weather conditions but also straddles the UK continental shelf that sees the seabed plunge from 120 metres to 600 metres and more.

The Shetland Gas Plant takes gas condensate from the Laggan field, first discovered 30 years ago, and the Tormore field found nine years ago. Reserves from these fields are expected to last up to 20 years. The plant construction phase was estimated to have involved ,more than 2,500 jobs, with 70 full time posts in plant operation. The plant can handle up to 500 million standard cubic feet of gas (equivalent to 90,000 barrels of oil) each day, which will provide up to 8% of the UK’s demand for natural gas. 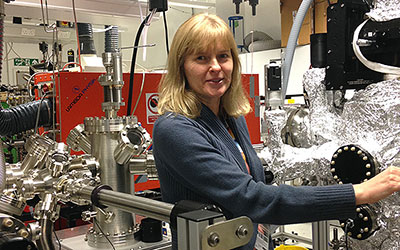 Professor Judith Driscoll, Professor of Materials Science at the University of Cambridge, was awarded the Royal Academy of Engineering Armourers and Brasiers Company Prize in January 2016. The award is for excellence achieved in the field of materials engineering, resulting in a successful application of new materials in practical engineering systems.

By creating nanostructured superconducting thin films, Professor Driscoll has merged the fields of composite materials and electronic materials. Emerging applications for this innovation include generators in wind turbines, motors and MRI scanners, as very high magnetic field magnets for basic science experiments, including even next generation LHC coils.

The award recognises the processes she has introduced that are now used by all the major superconducting wire manufacturers worldwide. Professor Driscoll’s innovative materials engineering research over the past decade has initiated a new field of research and development which goes well beyond the superconductor field. Other oxide electronics areas are now benefiting from her materials engineering approach, including magnetics (where much higher TC ferromagnets are made), ionics (where much enhanced ionic conductivity is obtained), and magnetoelectrics and ferroelectrics (where strain coupled materials are created to achieve much higher temperature operation systems).

Construction of the first development on the University of Sheffield’s new advanced manufacturing campus is now complete. When Factory 2050 has been fully fitted out, the £43 million complex will be the UK’s first fully reconfigurable assembly and component manufacturing facility for collaborative research. Facilities will include advanced robotics, flexible automation, unmanned workspaces, off-line programming in virtual environments, 3D printing from automated systems and new programming and training tools. 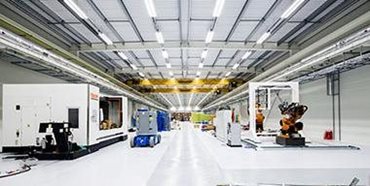 It is hoped that Factory 2050 will attract manufacturers to the new Advanced Manufacturing Innovation District, which is being established as part of the government’s Northern Powerhouse initiative. The intention is that this becomes part of Europe’s largest research-led advanced manufacturing cluster, centred on the M1 corridor near Sheffield and Rotherham, and already home to the Advanced Manufacturing Research Centre with Boeing and the Nuclear Advanced Manufacturing Research Centre. The 7,000m² building, constructed largely from glass, also aims to excite young people about the prospects of a career in 21st century engineering. It is part funded by the European Regional Development Fund and the Higher Education Funding Council for England, with each contributing £10 million to the project.

Laser scanning and digital prototyping can help the forensic investigation of crime scenes. Professor Mark Williams explains how his team’s technologies and expertise have helped solve serious crimes and aid the presentation of evidence to juries.

The writer and broadcaster Geoff Watts talked to Mike Polson, Engineering Director of Magstim Company Ltd, about the history and potential of transcranial magnetic stimulation.

After nearly 20 years of research and a wide tranche of clinical trials, a medical innovation originating in Oxford is saving lives and winning awards.

What makes an exciting roller coaster?

Sarah Griffiths talked to engineers, designers and enthusiasts about the elements that all roller coasters share and what makes some rides scarier than others.