The device, which uses normothermic perfusion technology, enables the preservation of organs at normal body temperature (37˚C). This gives clinicians and transplant units a number of advantages over conventional cold preservation techniques that keep livers ‘on ice’ at 4˚C. Normothermic perfusion can significantly increase preservation time (up to 24 hours) without detrimental effects by allowing normal function of the organ. The liver is perfused with normothermic oxygenated blood at physiological pressures and supplied with nutrients throughout the preservation and transportation process. The metra is designed to self-prime with three units of packed red blood cells, type-matched to the organ, and a half litre of colloid solution. Under gravity, this takes just 10 minutes, after which the perfusate is warmed to body temperature and oxygenated at the push of a button – and the unit is ready to receive the organ. The liver becomes effectively a functioning organ during preservation, allowing it to be continually assessed for haemodynamic, metabolic and synthetic performance. 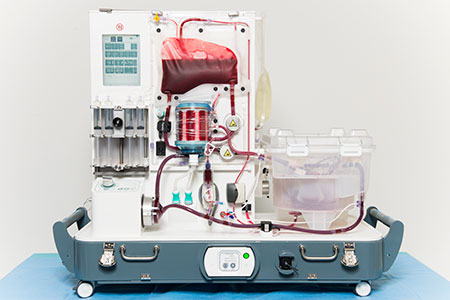 Longer preservation times also give the transplant units a wider catchment area within which to acquire organs and refer patients, and result in lower operational costs. Patients benefit from improved availability and more time to prepare for the operation, while surgeons are able to monitor more closely and assess more accurately the condition of the organs, operating room logistics and admission times are also efficiently managed.

One of the important aspects of the metra is that it is portable and self-contained. It all sits on one trolley with a protective shell and castors that enable it to be transported from hospital to hospital.

The pioneering work behind the metra was begun in the 1990s by Professors Peter Friend and Constantin Coussios. They remain Oxford academics as well as medical and technical directors of OrganOx Ltd, which was formed in 2008 with Dr Les Russell as its CEO. The device was developed and trialled thanks to four phases of funding from a range of institutional and private investors.

The results of a 220 patient, randomised clinical trial comparing living transplant outcomes with the metra vs conventional cold storage are expected in the second half of 2016.

HOW DOES THAT WORK? - Noise-cancelling headphones

Jenny Bardwell talked to Simon Maddrell, Executive Director of the charity Excellent Development, about the principles and success of sand dams.

Laser scanning and digital prototyping can help the forensic investigation of crime scenes. Professor Mark Williams explains how his team’s technologies and expertise have helped solve serious crimes and aid the presentation of evidence to juries.

A lot more than lubrication

Professor Ian Hutchings FREng, GKN Professor of Manufacturing Engineering at the University of Cambridge, highlights the progress and some failures of the important discipline of tribology.