In his Ingenia opinion piece of December 2015, Patrick Bellew makes powerful arguments in favour of improving the UK building stock, invoking the threat of climate change and the opportunity of stimulating construction activity. To these arguments we should probably add the impacts that poor quality, inefficient buildings have on health and the national infrastructure.

Fuel poverty makes headlines, but the long-term health issues relating to poor quality housing are less widely discussed. Work by the BRE (Building Research Establishment) and The University of Warwick has identified that the direct cost to the NHS of health problems due to poor housing is likely of the order of £600 million annually and that the total societal cost of dealing with such issues could be in the region of £1.6 billion a year.

In retrofitting housing to improve energy efficiency, many of the issues that lead to poor health are also rectified. The Green Deal had the potential to spin off societal benefits and reduce costs far beyond mere energy efficiency. Yet this key policy measure was effectively killed off by a combination of delays, lack of financial or regulatory support, and high interest rates on the loans making them unattractive.

Much political capital has been made by politicians’ attempts to impose their will on energy suppliers to cut energy bills. Yet, on a purchasing power basis, UK domestic energy prices are below average for Europe. Fuel poverty in the UK is not simply a consequence of the unit price of energy, it is primarily a result of poor quality housing requiring excessive fuel to heat.

Interventions to lower supplier prices may also reduce funds available for reinvestment at a time when Ofgem estimates that £200 billion may be required to ensure a secure and resilient energy supply system. Lacking strategic investment in the recent past, we now appear to be subsidising the construction of diesel generator farms to meet a capacity shortfall with one of the most polluting forms of generation.

Capacity is obviously dictated by peaks in energy demand, which occur in winter when we require the utility of heat and light in buildings. As Patrick Bellew points out, we have the knowledge and techniques to provide the same utility with much lower energy demands. What we lack are the mechanisms and political will to address the poor quality and energy inefficiency of our building stock.

If we reduce energy waste in buildings, we can reduce damage to the climate, reduce fuel poverty and improve health while simultaneously reducing the need for additional infrastructure capacity. The capital that would have to be expended on capacity could instead be invested in improving the quality of the infrastructure, such as deploying smart grid technologies and demand management, leading to yet further efficiency savings.

Energy efficiency is a win-win-win! However, as with solving any simultaneous equations, to find the right answer we must consider the entire problem at once. A national infrastructure project, as Bellew suggests, may be the answer, but it seems that this cannot be left to government to sort out. Perhaps our national energy policy should be the remit of an independent commission that is able to operate across multiple sectors and is led according to the principles of systems engineering.

The Opinion piece by Patrick Bellew in Ingenia 66 raised the spectre of the slow pace of change and the piecemeal, now totally uncoordinated, approach to reducing energy consumption in the existing UK building stock. Given the many partial solutions to this conundrum, there can be little doubt that it is the combination of infrastructure investment and smart systems that can and should yield the best results. The ‘Buildings as power stations’ model being developed by SPECIFIC Innovation and Knowledge Centre and its partners is a good example of how this might look.

In this model, solar energy is captured by building integrated photovoltaic panels and is used immediately or stored in batteries for later consumption. Solar thermal energy from the heated air surrounding metal panels on the walls of the building, captured by a small heat pump, can be used directly or stored in water or chemical media and regenerated as required throughout the year. With the exception of the inter-seasonal heat storage system being developed in-house, the various components are readily available on the market now. The innovation in this concept is not the individual technologies but the way they are integrated together into one smart system within the building. SPECIFIC has further technological development in the pipeline to drive down the costs of implementation and to increase performance. 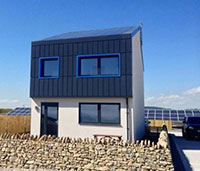 The SOLCER concept house took 16 weeks to construct and was completed in February, 2015. It is situated on the site of Cenin Renewables Ltd in Pyle, near Bridgend

The Welsh School of Architecture at Cardiff University has designed and built the first demonstration of the ‘Buildings as power stations’ concept in the SOLCER house at Stormy Down, Bridgend. The house is built within normal social housing parameters, using existing technology from the local supply chain and at competitive cost. Significantly, the house generates substantially more energy than it consumes over the annual cycle. With current house building targets at 200,000 new homes a year over the next 10 years, the opportunity is there to significantly reduce the UK dependence on fossil fuels.

The model can also be retrofitted to existing buildings and, in all, 26 buildings, new and old, have been used to successfully demonstrate various aspects of the approach. If Patrick Bellew were to get his wish of a national infrastructure project, it should be commissioned to drive for energy storage and smart systems to be installed within buildings to make them smart users of energy–not just passive structures. Then, with a growing collection of smart buildings, it is not such a big leap to see how they could be connected into smart city networks making a very useful contribution to the capacity of the National Grid.

In summary, the ‘Buildings as power stations’ model of collecting, storing and regenerating solar energy at the point of use, if widely applied, will minimise extra demand, avoid significant additional cost in the distribution network and will substantially alleviate the variability and resilience in both gas and electrical supply. It represents a transformation that could provide low carbon energy, at scale, with no marginal cost to the UK economy.

HOW DOES THAT WORK? - Noise-cancelling headphones

The writer and broadcaster Geoff Watts talked to Mike Polson, Engineering Director of Magstim Company Ltd, about the history and potential of transcranial magnetic stimulation.

A lot more than lubrication

Professor Ian Hutchings FREng, GKN Professor of Manufacturing Engineering at the University of Cambridge, highlights the progress and some failures of the important discipline of tribology.

Jenny Bardwell talked to Simon Maddrell, Executive Director of the charity Excellent Development, about the principles and success of sand dams.