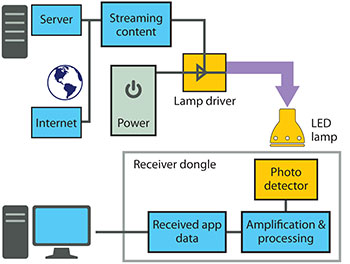 Data is streamed via an LED lamp with signal-processing technology

As LEDs are semi-conductor light sources, the current of electricity can be brightened and dimmed at ultra-high speeds. Therefore they can be switched on and off faster than the naked eye can detect, making the light source appear to be on continuously. While to us these changes in amplitude go unnoticed, they can in fact enable the transmission of data at rapid speeds.

Data is fed into an LED lightbulb embedded with a microchip with signal processing technology. When the data is streamed, the changes in amplitude causing the LED to turn on and off allow the data to be transmitted in binary code. A photodiode detects the light stream and transforms the amplitude fluctuations into an electric current.

The electrical signals are then converted back into a data stream and transmitted to a computer or mobile device, where a binary data stream runs web, video and audio applications.

Li-Fi has almost no limitations on capacity as the visible light spectrum is 10,000 times larger than the entire radio frequency spectrum used by Wi-Fi. Li-Fi is also less susceptible to interference, as visible light cannot pass through walls.