Through its public engagement grant scheme, Ingenious, the Royal Academy of Engineering has this year funded 23 new projects that will allow engineers to engage the public in innovative ways.

The scheme supports projects across the UK to run activities that give engineers the opportunity to share their stories, expertise and passion for technology with audiences ranging from school groups to retired people. A major aim of the scheme is to encourage engineers to develop their communications and engagement skills. 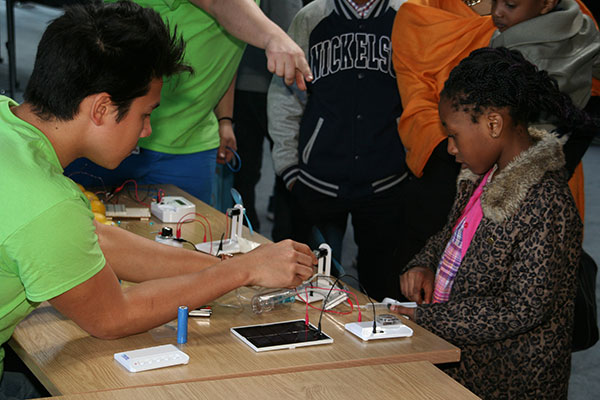 Projects that have been funded this year include Heart in your hands, an interactive experience where people can get ‘hands-on’ with robotic hearts that mimic the structure and function of normal and diseased human hearts. Visitors to events in Birmingham, Bristol and London will be able to discover the engineering behind the heart, and how it works and adapts to disease.

A Stemettes Hackathon weekend for young women at Imperial College London has also been funded. The Stemettes are a group of women working to inspire and encourage girls and young women into STEM careers. The Hackathon will see 50 female school students aged 12 to 18 learn programming techniques and develop their own app, game or website. The students’ finished products will be presented to a panel of expert judges, and participants will have the opportunity to ask professional engineers and computer scientists about their careers.

Other projects funded this year include an engineering-themed photography competition in London and a project from Techniquest Glyndwr that will encourage over 4,000 members of the local community to go on an engineering adventure in North Wales.

Ingenious is supported by the Department for Business, Innovation and Skills and has funded more than 140 projects to date, providing opportunities for over 2,000 engineers to take part. A full list of projects funded by the scheme can be found at http://bit.ly/1WeZmwf

The first UK Robotics Week will take place between 25 June and 1 July 2016 to showcase leading UK technology and research in robotics and autonomous design, as well as engage and inspire school, college and university students. 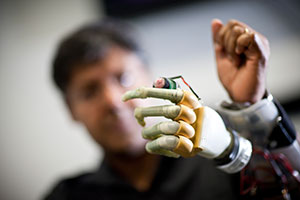 The week-long series of events and activities will be built around a nationwide competition called the School Robot Challenge, which will invite pupils across the UK to submit robotics-inspired essays or artwork, or design their own robotic bug. The competition hopes to engage children aged 4 to 17 years old with STEM subjects and encourage them to develop new skills.

During Robotic Week, the finals of a number of international academic challenges will take place.. Robotic research groups from around the world will come to the UK to demonstrate their latest technologies in surgical robotics, field robotics, autonomous driving and unmanned aerial vehicles.

The full programme includes open robotics labs, public lectures and industry showcases, among many other events. Further details can be found at www.roboticsweek.uk

The Royal Academy of Engineering’s Enterprise Hub has awarded eight UK researchers Enterprise Fellowships to help them start up companies based on their innovations. 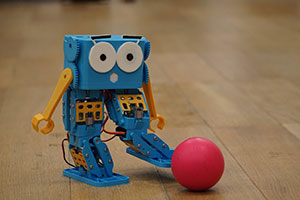 Dr Alex Enoch’s 3D-printed robot can be programmed to walk, dance or even play football, and can be controlled by a smartphone © Robotical Ltd

The Fellowships provide funding of up to £60,000 and aim to help researchers get new technologies to market. The Hub provides its members with a full package of bespoke support, covering everything from building a business plan to pitching to investors. It also offers mentoring from Academy Fellows, including leading engineering entrepreneurs including Sir Robin Saxby FREng, former Chief Executive of ARM, and Professor Neville Jackson FREng, CTO of Ricardo.

The eight awardees include Dr Damian Coyle from Ulster University, whose start-up NeuroCONCISE is developing a headset that reads brain activity and allows people to communicate without moving. The technology has huge implications for those left without the ability to move following a stroke, or brain or spinal injury. By imagining the movement of an arm or leg, people who are physically impaired will be able to communicate with doctors and loved ones.

Another researcher, Dr Alexander Enoch of Robotical Ltd, has developed a 3D-printed programmable robot that can be used as an educational resource to help people learn to code. The robots have already been successfully used to teach children.

Other technologies funded include a fibre-optic probe that screens for cancer, and bricks made of 90% recycled materials that could reduce greenhouse gas emissions and waste across the construction industry. 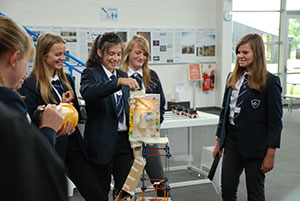 The achievements of women in engineering are being highlighted in a range of events across the UK, with an aim to inspire the next generation.

The Women’s Engineering Society (WES) is marking National Women in Engineering Day (NWED) on 23 June. The day aims to raise the profile and celebrate the achievements of women in engineering, and encourage girls and women to pursue careers in the field. Employers, schools and colleges, women engineers and professional engineering institutions are being encouraged to hold events, such as organising women’s networking events, opening up engineering workplaces for student careers visits or asking women engineers to give talks in schools. The sub-theme of the day is ‘raising profiles’ and a list of the 50 most influential women engineers, nominated by peers and backed by WES, will be published in the Daily Telegraph on 23 June.

One of the goals for this year is to sign up as many girls as possible to WES’s SPARXX network (www.sparxx.org.uk). The network provides news and information, such as events and career opportunities, for girls interested in technology, engineering, science and art, with the aim of inspiring and helping them on the path they choose to take.

In 2015, more than 500 events were held across the UK on the day and around 350 schools took part. Events included a gathering of over 800 people working in transport, engineering and technology at Horse Guards Parade, who broke the Guinness World Record for the most people performing a jumping high-five simultaneously, and an NWED event in Scotland attended by HRH Prince Charles that was organised by Selex ES. The official #nwed2015 hashtag trended on Twitter for more than nine hours and the day attracted significant media coverage, both nationally and internationally.

To mark International Women’s Day on 8 March, a page was launched on the Royal Academy of Engineering’s website celebrating the women engineers in the Fellowship. In the 43 profiles on the page, the women Fellows discussed their greatest engineering achievements, and what they would say to someone considering a career as an engineer. The profiles included: Dr Dame Sue Ion DBE FREng, Chair of the Nuclear Innovation Research Advisory Board; Professor Carole Goble CBE FREng, Professor of Computer Science at the University of Manchester; Dame Judith Hackitt DBE FREng, Chair of the EEF; Professor Claire Adjiman FREng, Professor of Chemical Engineering at Imperial College London; and Dr Liane Margaret Smith FREng, Managing Director of Wood Group Intetech Ltd.

More information about NWED and resource packs can be found at www.nwed.org.uk. To view the profiles of the Academy’s Fellows, please visit www.raeng.org.uk/IWD2016

GEARED UP FOR OLYMPIC SUCCESS

A team of engineers at BAE Systems has developed an advanced cycling ergometer with the British Cycling team to help them prepare for the Rio 2016 Olympic and Paralympic Games this summer. 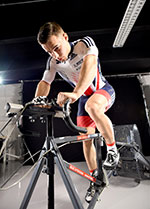 The ergometer measures the work rate and energy expended by cyclists and is capable of accurately replicating the centrifugal forces of a velodrome.

While similar in appearance to a normal static exercise bike, its technology consists of a large variable fly wheel at the rear that has adjustable blades to increase or decrease resistance on the pedals. It can also simulate different gear ratios and generate force for the cyclist based on their individual load and the track they are riding on.

The ergometer was created upon request for the British Cycling team, who asked for an adaptable training system that could be customised for different riders and events. In addition, the design allows it to be used for data collection in laboratory conditions, collecting gas and blood for analysis and testing at high speeds to examine athletes’ technique.

BAE Systems’ Technology Partnership with UK Sport began in 2008 and has developed engineering solutions for more than 30 different sports, including taekwondo, athletics and wheelchair basketball, benefiting over 200 Olympic and Paralympic athletes.

Find out more about the Technology Partnership at http://bit.ly/1Q2Qwu6

ENGINEERING SEASON AT THE V&A 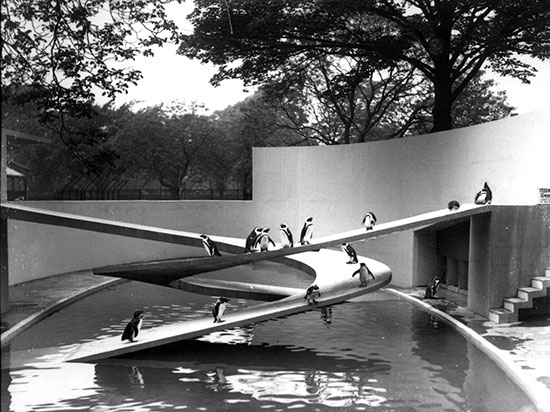 The Victoria and Albert Museum (V&A) presents its first engineering season this summer, featuring a major retrospective of celebrated engineer Ove Arup and a nature-inspired installation, constructed by robots.

Engineering the world: Ove Arup and the philosophy of total design will run between 18 June and 6 November 2016. The exhibition will span 100 years of engineering and architectural design, looking at Ove Arup’s work and legacy – from his writing about design and his early projects, such as the Penguin Pool at London Zoo and the Sydney Opera House, to the Arup firm’s more recent work, including the Leadenhall building and the Crossrail project. Previously unseen prototypes, models, archive material, drawings, film and photography will be on display, as well as immersive digital exhibits using animation, simulations and virtual reality. 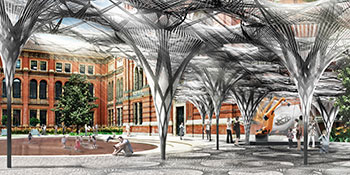 The exhibition is complemented by a temporary installation in the museum’s garden. The Elytra Filament Pavilion consists of a rolling canopy of tightly woven carbon fibre cells, inspired by the structure of the forewing shells of flying elytra beetles, created using an innovative robotic production process. The pavilion will grow over the course of the engineering season in response to data on structural behaviour and patterns of activity in the garden, which will be captured by sensors in the canopy. New cells will then be created by an onsite robot, developed by industrial robotics firm Kuka. The installation, created by experimental architect Achim Menges, structural engineer Jan Knippers, climate engineer Thomas Auer and Moritz Dörstelmann, a research associate at the Institute for Computational Design, University of Stuttgart, is in place from 18 May until 6 November 2016.

A free display in the V&A and RIBA Architecture Gallery, Mind over Matter, will showcase major engineering projects by British firms including AKT II, Atelier One, Buro Happold, Expedition Engineering and Jane Wernick Associates. Other activities across the season include: an Exhibition Road engineering residency supported by the Heritage Lottery Fund, a themed Friday Late, a series of lectures and gallery tours, and a symposium about biomimicry, design and engineering with a keynote lecture by Achim Menges.