The Royal Academy of Engineering MacRobert Award is the premier prize for innovation in UK engineering. It is awarded annually for an outstanding example of innovation, that has achieved commercial success and is of benefit to society. It seeks to demonstrate the importance of engineering and the contribution of engineers and scientists to national prosperity and international prestige.

The award was founded by the MacRobert Trust and first presented in 1969. Every submission is reviewed by a panel of judges drawn from the Academy’s Fellowship and across engineering. The award honours the winning company with a gold medal and the team members with a prize of £50,000. Here, Ingenia showcases the three finalists for this year’s award in alphabetical order. The winner will be announced at the Academy Awards Dinner on 23 June 2016.

Linx is the first-ever prosthetic limb with integrated robotic control of the knee and foot – a system in which the parts work together like a human leg.

Where previously lower leg prosthetics wearers have had to plan their days meticulously according to the limitations of terrain they can tackle – a walk in the country may be more trouble than it’s worth – the smart robotics in the Linx limb system, developed by Basingstoke-based Blatchford, constantly monitor and adapt to movements and automatically adjust to the environment.

The Linx uses seven sensors across both the knee and foot that act like human nerves, continuously collecting data on the user, activity, environment and terrain. The central computer then acts like the brain, using this data to adapt the limb’s response using pioneering software called Mi² (motion-integrated intelligence). This means the wearer can walk confidently, knowing that the limb will be at the right speed and support level at all times.

Even simply standing still can be a challenge for lower limb prosthetics wearers, using a lot of energy and concentration to hold the leg steady, which means that severe back pain can be common. The Linx senses when the wearer comes to a standstill and automatically locks so that they can relax, and when they want to move again, the sensors immediately leap into action and unlock seamlessly.

When a patient is first fitted with the Linx, a clinician programmes its central computer by running through a calibration sequence so that the limb learns how its wearer naturally walks and adapts accordingly. This is done via a Bluetooth connection to a desktop programme that shows in real time what the sensors are picking up as it detects the wearer’s natural speed and movements. A smart algorithm then calibrates the limb automatically in one simple step as the knee and the foot sensors ‘talk’ to each other. Previous prosthetics would require each set to be calibrated in turn in a lengthy process that would often require repeat adjustments. 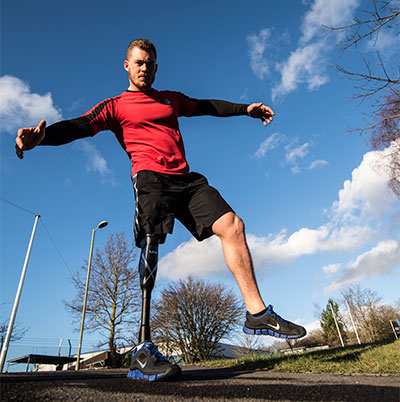 The Linx limb system’s sensors act like human nerves to inform the prosthetic’s response so that users can walk, balance and be supported on all types of terrain © Blatchford Group

In England alone, there are currently around 45,000 people who rely on prosthetic limbs, with around 4,000 lower limb amputations carried out each year. Currently, only a fraction of these will have access to the latest technology in the Linx as it falls outside NHS budgets; most Linx limbs in use today are benefiting amputees in the USA and Norway. Prosthetic limbs offered by the NHS vary depending on budget cycles within the financial year. Despite a high price point, the Linx may reduce costs in the longer term by reducing secondary treatments required for back pain, arthritis and falls, extending the life of sockets, and in lessening the need for carers by giving amputees more freedom.

Blatchford is a family owned business established in 1890, and has grown to become a global leader in the provision of prosthetic and orthotic products, and in providing specialist treatment and rehabilitation.

The company currently employs 800 people worldwide and in the last year alone (2015–2016), Blatchford achieved a 25% increase in global sales. The company invests 10% of its revenue back into further research and development, which means that it is already working on future advances that could potentially make use of 3D printing to deliver even greater customisation and more patient benefit.

Jaguar Land Rover has designed and built from scratch a world-class engine family with the creation of a state-of-the-art manufacturing facility in the UK.

Jaguar Land Rover is the UK’s largest automotive manufacturer, with a history going back almost 70 years. The company has been named as a finalist for the 2016 MacRobert Award in recognition of the world-class innovation behind the most significant decision the company has ever made: to design and manufacture its own engines for the first time in a generation. 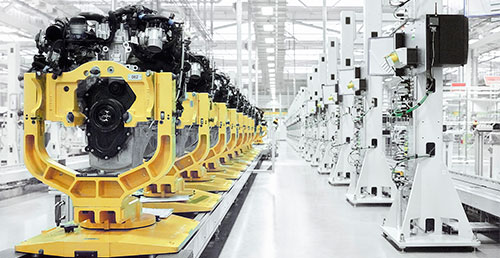 In 2011, it was announced that Jaguar Land Rover would invest £1.5 billion a year for the next five years in new product development. The design, development and creation of a new family of Ingenium engines supports the company’s aim to be completely self-sufficient in the design and manufacture of all engines by 2020. Starting with little more than a blank sheet of paper and an empty field, the Jaguar Land Rover team has developed an entire suite of world-leading Ingenium engines that meet the growing demand for lower fuel consumption and cost of ownership, without compromising vehicle performance and driver experience, and delivering commercial robustness for the company now and into the future. The first diesel Ingenium engine was launched in January 2015, and the petrol engine is due to launch later this year.

The Ingenium engines are the result of almost 200 innovative ideas, which led to more than 100 new patent applications. These were combined to deliver significant emissions and weight reductions alongside improved performance and fuel economy. A key aspect of this was to deliver the lowest engine friction, using the latest engine system technologies. Despite adding features and increasing power output, Ingenium engines weigh up to 40 kg less than other equivalent engines.

In order to build the Ingenium engines, Jaguar Land Rover built an entire manufacturing facility from scratch, which presented an opportunity to create a world-class manufacturing environment. In 2012, building work started on the £500 million, 98,000 m2 state-of-the-art Engine Manufacturing Centre (EMC) just outside Wolverhampton, and work is currently underway on an 85,000 m2 expansion worth in excess of £450 million. The EMC also has impressive green credentials with one of the largest solar panel roofs in the UK, which can generate up to 30% of the site’s electricity needs.

Filling a brand new factory with skilled staff presented its own challenge, and Jaguar Land Rover took a new approach to creating job opportunities and upskilling the local community. Every EMC employee undertakes an intensive two-week immersive training programme called the Powertrain Way, which has successfully introduced bus drivers, bricklayers and beauticians to new careers in engineering. Wolverhampton has the second highest unemployment rate in the UK, and the EMC is already providing a large number of opportunities in the region. The facility opened in 2014 and already has almost 1,000 employees, with a further 5,500 in the supply chain. More than 40 people have enrolled on an apprenticeship programme, and last year Jaguar Land Rover opened an Education Business Partnership Centre working with local schools to encourage children to pursue STEM subjects.

MRI scanners use strong magnetic fields and radio waves to produce detailed images of the inside of the body. They can be used to examine almost any part of the body, and the stronger the magnetic field, the higher the resolution of images that are produced. The first MRI scanners, developed in the 1970s, had a magnetic field strength of well under 1.0 Tesla. Today, most MRI scanners operate at 1.5 to 3.0 Tesla, and have become an invaluable diagnostic tool, used to help millions of patients around the world.

With double the field strength of most MRI scanners, SMT’s magnet enables much higher resolution images. The ultra-high magnetic field (UHF) 7 Tesla (7T) system offers sharp enough images to show vascularity of the brain without the pigment that is usually required for contrast. This allows researchers to identify lesions and bleeds, and specific areas of the body affected, more easily, potentially enabling unprecedented insights into hard-to-diagnose conditions.

Achieving such a leap forward in magnetic field was a huge engineering challenge. A MRI magnet is composed of a number of coils of thin wires carrying a high current. The move from 3T to 7T required the addition of enough wire to stretch between London and Brussels. These coils then need to be cooled to 4.2 Kelvin to enable the wire to become superconducting and carry enough current to generate a magnetic field 140,000 times that of the Earth’s own. The magnet is vacuum insulated, like a thermos flask, in order to maintain the large temperature gradient between ambient conditions and -269ºC around the inner magnet coils. 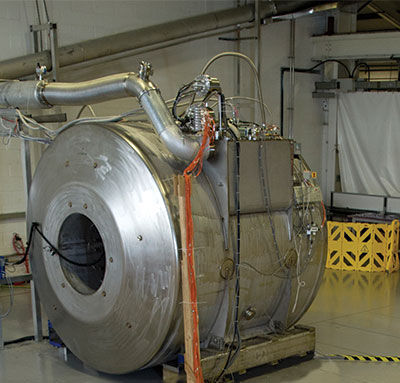 The 7 Tesla magnet has now been incorporated into the MAGNETOM Terrasystem, which will offer clinicians and researchers access to the best of MRI imaging © Siemens Magnet Technology

SMT’s system is half the weight of other current technologies and is pre-assembled and cooled at the factory ready for air freighting, unlike conventional ultra-high field MRI scanners, which have to be shipped in parts and assembled and cooled in situ. This saves several weeks and also cuts the helium requirement, a key advantage given the global helium shortage. The 7T magnet has now been incorporated into the MAGNETOM Terra system, which will offer clinicians and researchers access to the best of MRI imaging.

SMT, which employs 420 people at its Oxfordshire site, was able to achieve this remarkable step-change in MRI capability by starting from scratch rather than making incremental improvements to their existing technologies. By investing heavily in R&D, and probing the absolute physical limits of the technology, the team completely re-invented the superconducting magnet, creating a smaller, lighter, better integrated structure.

The MAGNETOM Terra will enable new insights into neuro-degenerative diseases, such as Alzheimer’s, Parkinson’s and multiple sclerosis, which represent some of the largest unmet challenges within medicine today. It could also assist in drug development through improved pre-screening of clinical trial participants to ensure that their conditions are similar, enabling more efficient drug trials. There is the possibility it could be used to help develop treatments for early-stage diseases and enable monitoring of the efficacy of existing treatments, detecting, for example, whether chemotherapy drugs have penetrated a cancerous tumour.