Arthur Zang, an innovator from Cameroon, has won the second Africa Prize for Engineering Innovation for his heart-monitoring device, the Cardio-Pad. The invention could change the way that Africans access treatment for heart disease, a critical illness across sub-Saharan Africa.

The Cardio-Pad is a small tablet device that allows any healthcare professional to perform heart diagnostics at any location. These diagnostics, sent to a cardiologist via a mobile phone network, can be interpreted in less than 20 minutes and enable the cardiologist to discover, monitor or rule out a heart condition. As cardiologists are often located in big cities, the device will reduce the number of expensive trips that people living in rural areas will have to take. 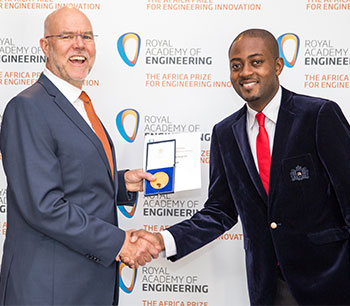 Arthur Zang, winner of the 2016 Africa Prize, with the Chair of the judging panel, Malcolm Brinded CBE FREng

Zang’s innovation earned him a prize of £25,000, and three other finalists each received £10,000 to support their businesses in the fields of health technology and access to energy.

Eddie Aijuka from Uganda created Kamata, an electricity-theft-prevention device that attaches to a household power supply and alerts authorities and cuts it off when the power is tampered with. Felix Kimaru and the Totohealth team from Kenya invented a web-based network that supplies mothers and pregnant women with life-saving information and advice. Matt Wainwright and the Standard Microgrid team from South Africa devised an electricity utility-in-a-box that speeds up rural electrification and reduces energy costs.

The Royal Academy of Engineering launched the Africa Prize for Engineering Innovation in 2014 with the aim of stimulating, celebrating and rewarding innovation and entrepreneurship in sub-Saharan Africa. It encourages talented engineers to use their skills to develop solutions to local challenges, highlighting the importance of engineering in improving quality of life and economic development. Twelve shortlisted Africa Prize entrants from nine countries in sub-Saharan Africa received business training and mentoring, during which they learned to develop business plans and market their innovations.

Zang was presented with the prize by last year’s winner, Dr Askwar Hilonga, a chemical engineer from Tanzania. As well as winning the Africa Prize, Dr Hilonga’s innovation to use nanotechnology to create bespoke filters for safe drinking water was awarded first place in the inaugural Pitch@Palace Africa competition in December 2015.

The Africa Prize is supported by the Shell Centenary Scholarship Fund, Consolidated Contractors Company, the Foreign and Commonwealth Office, Conoco Phillips and the Mo Ibrahim Foundation.

More information can be found at www.raeng.org.uk/AfricaPrize

In June, the Royal Academy of Engineering’s annual Awards Dinner celebrated and recognised a number of engineers who have made a remarkable contribution over the course of their careers.

Professor Danielle George, Professor of Microwave Communication Engineering at the University of Manchester, received the Rooke Award for her outstanding contribution to the public promotion of engineering through her work with various media channels. In 2014, she presented the engineering-themed Royal Institution Christmas Lectures, and has also been a guest on a number of BBC Radio 4 shows, Start the Week, The Life Scientific and The Infinite Monkey Cage, as well as The One Show and BBC Breakfast. Professor George is also heavily involved in Manchester’s position as the European City of Science 2016, leading the Citizen Science and Engineering project (Manchester Robot Orchestra), and bringing together academics, local schools and industry. 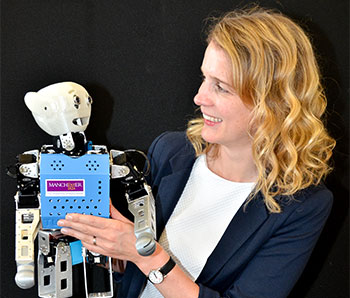 Professor Danielle George, winner of the Royal Academy of Engineering’s Rooke Award, with a member of Manchester’s Robot Orchestra © University of Manchester

The Major Project Award was presented to a team from BAE Systems’ AI Labs for its Intermediate Frequency Modem System, which is a key component of the technology used by the Rosetta spacecraft to study the comet 67P/Churyumov–Gerasimenko. It allows the images and scientific data transmitted from the spacecraft to be received and analysed by scientists back on Earth.

The Prince Philip Medal, the Academy’s highest individual accolade, went to Dr Jonathan Ingram for his groundbreaking work on BIM (building information modelling). Dr Ingram’s work on Sonata, which he wrote and completed in 1985, led to the start of BIM development. Sonata was the first system to have complete current BIM functionality, and has been used by around 1,000 different firms since 1986. In 1992, he also designed and co-wrote Reflex, and later Pro/Reflex. His work on these systems led to the early growth and development of BIM systems.

The Awards Dinner took place on 23 June at the Pavilion at the Tower of London. The winner of the MacRobert Award, Blatchford (see page 34), and the three Silver Medallists (see page 39) were also announced.

In May, the report Living without electricity was published by the Royal Academy of Engineering, Lancaster University and the Institution of Engineering and Technology (IET). The report detailed the loss of most modern infrastructure in Lancaster for four days in December 2015, caused by flooding in north Lancashire and Cumbria.

These ‘cascade failures’ were the subject of a workshop at Lancaster University to explore what lessons could be learned from the city’s experience. Attended by local and national service providers and government representatives, the workshop considered how the UK should prepare for such events in a society that is becoming more and more dependent on electronic and digital infrastructure that is reliant on electricity supply.

The report, authored by Professor Roger Kemp MBE FREng, outlined the balance that needs to be struck between ensuring sufficient resilience in national and local infrastructure and the need to ensure that it remains practical, efficient and affordable. It provides both a warning and advice to a range of audiences: national and local planners, utilities, emergency services, local authorities, transport operators, and the retail and banking sectors.

To read the report in full, please visit www.raeng.org.uk/livingwithoutelectricity

Between 22 and 25 September, New ScientistLive will take place at ExCel London. The event will have exhibitions, demonstrations and speakers across four immersive zones covering technology, earth, the cosmos, and brain and body.

The Royal Academy of Engineering stand will focus on how close we are to emulating superheroes and their enhanced human counterparts, with exhibits including state-of-the-art prostheses, smart materials and superhero helmets.

Ingenia readers can get an exclusive discounted rate on tickets. Tickets for Thursday or Friday are £20, saving £9 per ticket on the door rate, and tickets for Saturday or Sunday are £22.50, saving £6.50. Quote RAENG16 on the booking page at www.newscientistlive.com or call 0844 581 1295. 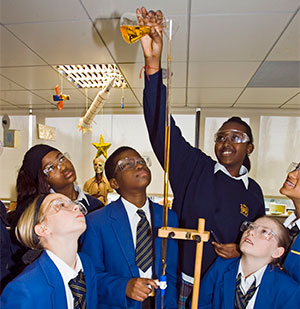 In May, the Royal Academy of Engineering published The UK STEM education landscape report, providing a useful summary of the key issues affecting engineering skills today. It highlights that many young people are not studying STEM subjects beyond GCSE, despite over 10 years of activity from more than 600 organisations encouraging them to do so. Of the 650,000 school students who take GCSEs each year, only around 30,000 then study A-level mathematics and physics.

The report underlines the need to coordinate organisations wanting to engage with schools so that they create a coherent, high-quality programme that provides young people with clear signposts for their further study. It also sets out the factors affecting involvement and interest in engineering beyond age 16.

Professor Richard Clegg, Chief Executive of the Lloyd’s Register Foundation who commissioned the report, said: “The Academy’s report highlights just how complex the STEM education landscape is and how difficult it is for many organisations to engage with an issue that is so important to our future prosperity. Inspiring the next generation, and widening access to skills and education for STEM careers, sits at the heart of the Lloyd’s Register Foundation’s charitable purpose. I hope that, in having undertaken this study, we in the community now make a concerted effort to work together and coordinate our activities to maximise the impact of our engagement with young people in schools and colleges.”

The report can be found at www.raeng.org.uk/stemlandscape

Engineers from Flint and Neill and Balfour Beatty have built a 48-metre-long suspension bridge in Rwanda that will benefit more than 10,000 people. 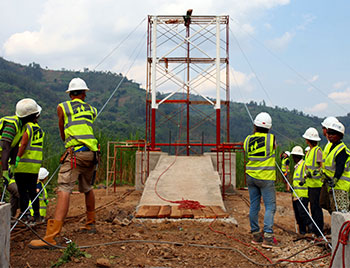 Partnering with not-for-profit organisation Bridges to Prosperity, the bridge building team, consisting of 10 engineers from the two companies and many community volunteers, has replaced an unreliable and unsafe crossing over the notoriously dangerous Mukungwa River in Tubungo, Rwanda. The new bridge will provide the communities on both sides of the river with greater access to schools, health centres and markets, increasing economic opportunity and reducing rural isolation and inequality.

Ian Firth, Flint & Neill Director and Bridges to Prosperity Trustee, said: “To think that something as straightforward as a piece of pedestrian infrastructure can positively impact on the livelihoods of thousands of residents in a small, developing community is remarkable.”

This is the second Bridges to Prosperity project that the team from Flint & Neill and Balfour Beatty has worked on. The organisation works with communities worldwide to build footbridges over impassable rivers to provide access to healthcare, education and markets. 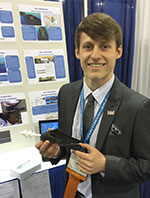 A student from the UK has won a prestigious engineering award at the International Science and Engineering Fair in the USA for his innovation to prevent rivers from silting up.

Brad Stalker, a 17-year-old student at Energy Coast University Technical College (UTC) in Workington, Cumbria, won third prize in his category after competing alongside more than 1,750 students from 76 countries. He was one of just two UK students at the competition in Phoenix, Arizona.

Brad’s winning project was based on a real-world problem. After his friends in nearby Cockermouth were forced to leave their homes because of flooding, he designed and manufactured a 3D-printed, scalable bioplastic device to upset the sediment in rivers and prevent silting.

Rod Edwards, Chief Executive of the Young Engineers charity, said: “Being awarded this prestigious prize really is excellent news for both Brad and the Energy Coast UTC. To be selected to represent the UK in Phoenix was an outstanding achievement, but to win an award against such stiff global competition was truly amazing. Brad is a fine example of the power of the UTC concept; he solved a genuine real-world problem with an innovative, well-engineered solution.”

Brad and Sud Sivaneswaran, from Sutton Grammar School, London, were chosen to represent the UK at the Young Engineers National Finals in March. Their trip to the USA was sponsored by the Worshipful Company of Scientific Instrument Makers, with mentoring from the National Physical Laboratory.

On 5 July 2016, the US space agency NASA successfully put its Juno satellite into Jupiter’s orbit. It was propelled there by a LEROS 1B rocket engine designed and built by UK company, Moog UK Westcott. 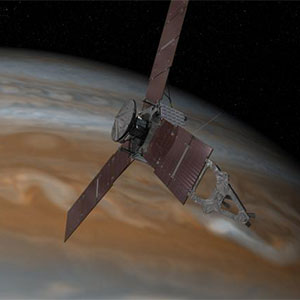 Having left the Earth five years ago, the probe had to fire its rocket engine to slow its approach to Jupiter and enter its gravity. Firing the engine was risky as no previous spacecraft had ever passed so close to the planet because its intense radiation can destroy unprotected electronics.

With Jupiter approaching, Juno’s main computer commanded the engine’s oxidiser and fuel valves to open, allowing the pressurised propellants to flow into the combustion chamber. The ensuing spontaneous ignition established the combustion process and the propellants continued to burn for approximately 35 minutes; the braking effect allowed Jupiter’s gravity to capture the probe and for it to enter into the planet’s orbit.

The orbit insertion has put Juno in a large eclipse around the planet that takes just over 53 days to complete, and a second burn of the rocket engine in mid-October will tighten this orbit to just 14 days.

The spacecraft is being used by scientists to sense Jupiter’s deep interior as they believe the structure and chemistry of its inside will allow them to discover how the planet formed more than four billion years ago.

HOW DOES THAT WORK? - Toughened glass

Tempering the glass to compress the outer surface and expand the inner layers balances the tension in the glass to make it tougher.