Global technology company Dearman has developed a family of engines that uses liquid air to deliver zero-emission power and cooling, with Sainsbury’s becoming the first company in the world to introduce a refrigerated delivery truck cooled by this novel engine.

The brainchild of Peter Dearman, a lifelong inventor and engineer, the Dearman engine is a liquid-nitrogen-powered piston engine that produces clean cold and power. Peter was interested in an engine, and wider world, that didn’t rely on fossil fuels and so developed one in which the pistons are driven by the expansion of liquid nitrogen, or liquid air. 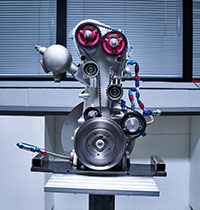 The Dearman engine is a cleaner, more efficient and cost effective alternative for transport refrigeration © Dearman

One of the interesting things about a Dearman engine is that it produces potentially valuable cold as a by-product, rather than heat. The first application of this technology is to provide transport refrigeration units (TRUs). The power generated by the heat exchange supports ancillary systems, such as feed pumps and fans for air circulation, and drives a vapour compression refrigeration cycle that provides a third of the cooling needed. The other two-thirds of cooling are provided by compressed liquid nitrogen that is transferred to a vaporising heat exchanger to cool the chilled compartment.

The technology is environmentally friendly; as well as reusing the heat exchange fluid, the engines do not release any polluting emissions such as nitrous oxide, carbon dioxide or particulates. It is also cost effective and more efficient compared to existing TRUs that consume up to 20% of a vehicle’s overall fuel. Sainsbury’s is currently trialling the technology, during which it expects to save 1.6 tonnes of carbon dioxide, 37 kg of nitrogen oxide and 2 kg of particulate matter, compared to when using a diesel engine.

During production, the engines can be engineered and configured to meet a range of different requirements for power output, efficiency and cooling capacity. Two variants of the engine are currently being developed: a simple single-cylinder engine that can be used for transport refrigeration units and auxiliary power and cooling units for buses; and a more complex multi-cylinder engine that produces more power and less surplus cold, which is being designed to act as a back-up generator for buildings and to form part of a waste-heat hybrid propulsion unit for trucks and buses.

Broadband in the backwaters: rural Britain's fight for faster internet

HOW DOES THAT WORK? - Toughened glass

Tempering the glass to compress the outer surface and expand the inner layers balances the tension in the glass to make it tougher.