Once considered dry and boring, data is an important asset and at the heart of a digital society. Professor Sir Nigel Shadbolt FREng, Professor of Computer Science at the University of Oxford, Principal of Jesus College, and Chairman and Co-founder of the Open Data Institute, sets out why data is a vital infrastructure that needs to be invested in, maintained and supported.

Human societies change when resources become either plentiful or scarce. The agrarian revolution saw food become available at a scale, and with a reliability, never seen before, while the industrial revolution saw manufactured goods become available at levels and costs not previously seen. We are now in the midst of a data revolution, and data is following the same path as food and manufactured goods before it.

However, data is not like food or manufactured goods, which once consumed are no longer available to anyone else. One of the greatest challenges of the modern world is how to distribute resources equitably and use them sustainably. 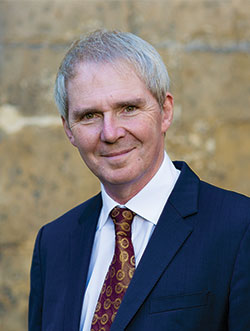 When infrastructures such as energy, transport, housing and agriculture are built for the 21st century, we worry about how we will afford them, make them available and do so in a way that does not diminish resources for future generations. The data revolution does not play by these rules. At the Open Data Institute (ODI), we have been working to promote the use of data at web-scale to support open innovation and provide knowledge for everyone.

Data does not have to be a rival good: your possession of it does not detract from my possession of it. If you use it, then it does not become unusable by me. Of course, we may choose to set up payment and protection systems around data and we must protect people’s privacy. But the ODI has been demonstrating the benefits of a data infrastructure that is as open as possible: certain data has greater use and value the more widely it is shared and used. Data is a new class of public infrastructure for the 21st century, and we need to view it as one that is as fundamental to modern society as power and transport, and that requires investment, curation and protection. Engineered correctly, data can generate extraordinary amounts of economic value.

When the human genome was first sequenced in 2000, there was a race to patent that data. In fact, it took a 2013 judgement of the US Supreme Court to rule that the genome could not be patented. The value that has accrued from that decision has eclipsed a monopolistic assignment of genomic data to a particular organisation.

When Transport for London (TfL) made its transport data openly available in 2010, it had a transformational impact on the data ecosystem. It led to a growing number of apps and companies using that data to provide services that we all use as we get around one of the great cities of the world more efficiently. Those apps and companies now form part of a global market as transport services around the world open up their data to a common standard. Moreover, TfL calculated that its decision had a return on investment of 58:1. These examples demonstrate that open data generates huge economic returns.

Geospatial data, such as administration regions, maps and addresses, are a vital building block for open data infrastructure. Lists of legal entities (both public and private sector), company directors and beneficial ownership registers help us link data together and understand which organisation is responsible for particular activities.

Both research and experience show us that to maximise value, the data infrastructure must be open and used by as many people as possible. It should be viewed as an asset that needs to be invested in and curated to make sure that the data is as up-to-date and accurate as possible. Data needs to be protected from abuse by bad actors and, in many cases, recognised as critical national infrastructure. It needs to be designed for openness and the global web of data.

An effective, efficient and equitable data infrastructure will generate value for this and succeeding generations. The UK needs to have the policy foresight to appreciate the importance of this enterprise, with public and private agencies or organisations coordinating and encouraging open innovation as it seeks to develop, maintain and deploy a national data infrastructure.

Essential infrastructure needs to be engineered to high standards, and must be robust, scalable, accessible, durable, secure, and of good provenance. The UK needs to develop the engineering skills needed to ensure that its data infrastructure has these characteristics.

This piece was adapted from the Engineering a Better World publication, which has been included as a supplement with this issue of Ingenia. It was published as part of the International Council of Academies of Engineering and Technological Sciences (CAETS) conference hosted by the Royal Academy of Engineering in September 2016.

Professor Sir Nigel Shadbolt FREng is Professor of Computer Science at the University of Oxford and Principal of Jesus College. He is also the Chairman and Co-founder of the Open Data Institute. In 2009, Sir Nigel was appointed Information Adviser to the UK government, helping transform public access to government information.

How to create the perfect wave

Waves of various shapes and sizes are being created by engineers for swimming, surfing, testing and research

INNOVATION WATCH - An appetite for oil

Gobbler boat, an innovative oil-spill retrieval vessel, is providing a cost-effective and efficient solution to dealing with the scenarios that arise from oil spills