Armourgel, an energy-absorbing material that can be incorporated into clothing, is being adapted from its origins in sportswear into a protective device for the hip that aims to protect the weak and fragile hip bones of osteoporosis patients and frequent fallers.

Dr Dan Plant, then an engineering PhD student at Imperial College London, had the idea for Armourgel when he was racing motorbikes in Europe; it was far too hot for traditional motorcycling protective clothing and he needed a solution.

He began working on a new protective material by testing combinations and layers of different composites and using softer, more flexible resins, instead of the hard resins covered in multiple textile layers that protective clothing is traditionally made from. His team tested around 2,500 different compositions before finding the optimum combination that resulted in a light, thin, yet protective material, made from a synergy of a thickening polymer and an auxetic geometry.

This resulted in a material that combines the properties of a smart material with a clever internal geometry. The smart material, shear-thickening polymer, is soft and flexible, but absorbs shock and stiffens momentarily on impact. The material has a different response at different strain rates. When moved slowly it is soft and flexible, allowing it to move with the musculature of the body, but when it is subjected to impact it momentarily stiffens, absorbing energy and spreading the load.

The active polymer absorbs a large amount of energy by itself. However, to create Armourgel, it is then moulded into an auxetic cellular geometry to increase the shock absorption. The three-dimensional inward-pointing shapes and open cellular structure of the auxetic geometry have thick cell walls that compress and absorb energy upon impact by collapsing in on themselves, dragging more material to the impact site and increasing performance by up to 300%.

Most energy-absorbing materials are foam based, and these can fracture upon impact. After stiffening, the cells bounce back and Armourgel returns to its original state undamaged and ready to be used again. It can also be fine-tuned to react to different types of pressure and can withstand temperatures ranging from -20° to 50°C. 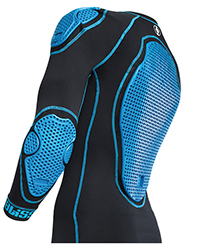 As a lighter and thinner material, Armourgel can be used on lightweight sports clothing

The technology was first used in clothing for extreme sportswear. Dr Plant applied for and was awarded a Royal Academy of Engineering Enterprise Fellowship, which provided him with funding and mentoring from an engineering leader to help him develop and commercialise Armourgel for the medical market. The first development he focused on was a preventative measure for hip fractures after learning that these injuries account for 15% of orthopaedic hospital beds, costing the NHS £2.4 billion a year.

In order to use the technology to create a preventative device for hip fractures, the team needed to design something that could provide the necessary protection, but was also comfortable enough to be worn on a daily basis under regular clothing. As Armourgel has high energy-absorption levels, it can be used in a much thinner layer and integrated within garments.

As the company continues to expand into new markets and applications, the technology will be used in helmets for use in areas such as the military, racing and sports. Dr Plant hopes to produce Armourgel products to sell directly to consumers and set up an advanced manufacturing centre in the UK.

How virtual reality is changing engineering

A number of engineering firms are using virtual reality and immersive technologies to transform how they work.

The Stavros Niarchos Foundation Cultural Center in Athens, Greece, combines attractive architecture with innovative engineering to be as accessible and beneficial as possible.

The engineering that played a role in Team GB’s cycling success at the 2016 Rio Olympics was a team effort, and helped the athletes increase their speed to break a number of world records.

How I got here - Orla Murphy

Orla's role focuses on optimising and improving the sound systems in the company’s vehicles, combining her passions for science, maths and music.