How I got here - Dr Sabesan Sithamparanathan

Dr Sabesan Sithamparanathan is Co-founder and CEO of PervasID. His company provides radio-frequency identification (RFID) readers for low-cost, long-distance sensing of passive RFID tags, for use in tracking in retail, security and healthcare.

Between 2001 and 2003, I studied A levels in physics, maths and chemistry in Sri Lanka. I had always been fascinated by, and enjoyed, physics and maths – I think it’s important to love your chosen subject and be good at it. While studying, I covered everything from mechanics to electronics, which interested me most as it is so relevant today. Our world is all about technology.

I studied for a BEng (Hons) in electronic engineering at the University of Sheffield. While there, I was awarded the Sir William Siemens Medal for being among the UK’s top 18 science and technology students. After I graduated, I worked at ARM as a student electronic engineer, before beginning a PhD in RFID at the University of Cambridge in 2007. In 2011, I was elected to a Research Fellowship at Girton College, Cambridge. In 2014, I was awarded funding and received money-can’t-buy mentoring as part of the Royal Academy of Engineering’s Enterprise Fellowships scheme to help turn the technology into a viable business.

What gave you the idea for PervasID?

PervasID is the commercial realisation of my PhD thesis. I chose RFID for my thesis because of the strong level of industry interest in the technology at the time, which the market had failed to satisfy. Since I am at heart an entrepreneur, it presented a commercial opportunity. My goal was to develop a passive ultra-high-frequency (UHF) RFID reader that could offer low cost and reliable reading of standard, off-the-shelf passive UHF RFID tags. In the real world, there are lots of dead spots where radio coverage is poor due to reflection. As a result, the reader does not detect the tags in every location, making the value of the technology limited. Addressing this problem required a fundamentally different approach. PervasID eliminates dead spots by using a distributed antenna system (DAS) network, as well as advanced signal-processing techniques. The technology achieves nearly 100% detection over areas of up to 400 square metres using a single reader.

Radio-frequency identification (RFID) systems use electromagnetic fields to automatically identify and wirelessly track tags. RFID tags contain electronically stored information and can be linked up as components of intelligent networks. The sensors can be interrogated via the internet, and their location can be determined from a distance. Passive RFID tags harvest their energy from the radio waves interrogating them and require no internal energy source or maintenance. Active tags have a local power source such as a battery.

Where is the company at now?

Following successful trials, PervasID was established in 2011. The technology is being effectively used in retail. One major blue-chip retailer has installed PervasID’s readers within a 45,000-square-foot area that covers the goods receiving area, storage, sales and fitting-room areas, with more than 100,000 tagged items. The success of the initial trial helped to release the first seed round of finance in September 2016. At the beginning of May 2017, we launched a second-generation product, the Space Ranger 9200, which delivers the world’s first near-100% accurate, wide-area passive RFID detection in real time. This allows retailers, hospitals and other industries to see the stock that they have in a store or building in real time.

I have always wanted to be an entrepreneur, so creating a University of Cambridge spin-out company is a big achievement. I have also received recognition for my work in engineering. In 2016, I won the Royal Academy of Engineering’s Sir George Macfarlane medal, for demonstrating excellence in the early stages of my career; and the Enterprise Fellowship from the Academy has given me valuable mentoring from Professor Andy Hopper CBE FREng FRS, a leading figure in computing. 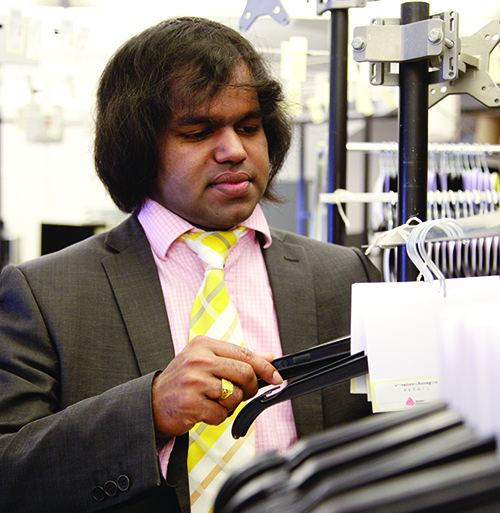 I love being an entrepreneur. It is a slightly different skill set to a conventional engineer, but it has been great to become a leader and take my technology from the lab to the real world. It is something that we need to see more and more of from young engineers.

What does a typical day at work involve for you?

As the CEO, my responsibilities include overall company management and administration, day-to-day operation, commercial development, technical development, product development, IP strategy and funding. I lead the in-house team and manage suppliers and customers. Last week, we announced our latest product and now our focus is on how to deliver this.

How would you encourage other young engineers to develop their own technologies?

The best ideas are often the simplest – people often realise how obvious your idea was once you have thought of it! Think in different ways to others, and be prepared for an idea to come to you at any time. As an early engineer, you have all the facilities to think harder, bigger and outside the box, giving you a chance to change the world.

Firstly, I would advise everyone to think about their unique skills: what are you good at and what do you love doing? If the answer to that is engineering, then pursue it. If you love what you do and are successful at it, then you will be recognised for your work.

What's next for you?

The last few years have seen a dramatic change in the use of low-cost passive RFID tags. Large-scale retail companies now place RFID tags inside their price tags. PervasID has patented RFID technology and has carried out major trials, achieving greater than 99% detection accuracy over a wide area in real time. My aim, as CEO and founder, is to meet all the major customer requirements in the field of retail, security and logistics. Our vision for PervasID is to be a leader in low-cost accurate wireless tracking and sensing.

The discovery of Richard III’s remains underneath a Leicester car park made headlines around the world. Forensic engineering science helped researchers find out how he died.