LEARNING TO BE AN ENGINEER 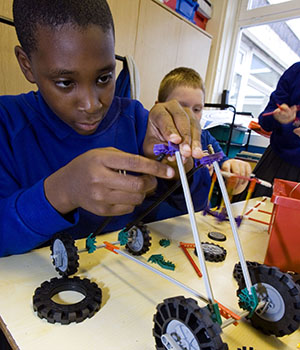 Reframing engineering as a set of habits of mind is a helpful and practical way of raising students’ achievement across all subjects, according to the findings of a report carried out by the Royal Academy of Engineering and the University of Winchester’s Centre for Real-World Learning.

Research for the Learning to be an Engineer report found that schools that adapted their teaching to encourage students to develop ‘engineering habits of mind’, such as learning from failure and playful experimentation, saw benefits not just in science and maths, but in pupils’ communication skills, creative problem-solving and confidence to engage in class discussions.

The report uses the results of three pilot schemes that worked with teachers in southern England, Greater Manchester, and Glasgow and East Ayrshire, describing ways in which a curriculum based on the ‘engineering habits of mind’ boosted pupils’ achievement and enhanced teachers’ confidence to engage with the engineering profession. The pilot scheme involved 22 primary schools, 11 secondary schools and one further education college, with 84 teachers and more than 3,000 pupils taking part.

Professor Bill Lucas, Director of the Centre for Real-World Learning at the University of Winchester, said: “If we are going to attract more young people into engineering, schools have to rethink the way they teach. The Learning to be an Engineer research has shown that, if you choose learning methods that foster engineering habits of mind such as problem finding and solving, systems thinking and visualising, then learners become more engaged.”

In March, the government set out a strategy, Next Generation Mobile Technologies: A 5G strategy for the UK, outlining its ambition for the UK to become a global leader in 5G, and create a world-leading digital economy.

There are three main outcomes that the government hopes to achieve: accelerating the deployment of 5G networks; maximising the productivity and efficiency benefits to the UK from 5G; and creating new opportunities for UK businesses at home and abroad, while encouraging inward investment.

The government hopes to meet the aims by creating a new national 5G Innovation Network that will trial and demonstrate 5G applications. This will be funded by a £16 million investment in a cutting-edge facility. The government will also be establishing a new centre of 5G expertise in the Department for Culture, Media and Sport to ensure that work to develop 5G capabilities across the UK is unified.

A good digital infrastructure is an important part of any future industrial strategy; sectors across the whole of the economy are expected to make use of new 5G technologies and applications, including transport sectors financial services and retail.

In the foreword of the report Karen Bradley MP, Secretary of State for Culture, Media and Sport, and Baroness Neville-Rolfe DBE CMG, Commercial Secretary to the Treasury, explain: “We want to enjoy the benefits of new 5G networks early on: faster, more reliable connections; new, valuable services from connected cars to smart factories; and more high-paid, high-skilled jobs.”

To read the report in full, please visit www.gov.uk/government/publications/next-generation-mobile-technologies-a-5g-strategy-for-the-uk

The Royal Academy of Engineering’s Enterprise Hub has awarded Enterprise Fellowships to 12 UK researchers to help them turn their innovations into successful products and companies.

The Fellowships provide funding of up to £60,000 each and aim to help researchers get new technologies to market. As members of the Enterprise Hub, the Enterprise Fellows will be provided with a package of support that includes training and networking events, access to the Academy’s new Taylor Centre – a dedicated home for the Hub with state-of-the-art meeting and networking facilities – and business mentoring from an Academy Fellow.

The new cohort of Enterprise Fellows includes Dr Felicity de Cogan, founder of NitroPep and inventor of a coating for steel that kills bacteria on contact. The NitroPep technology uses a surface modification process that imparts nanosized ‘spikes’ that insert into the bacteria and pop the cells. Developed for use in hospitals, the technology will reduce bacteria on surfaces and prevent cross contamination between patients, helping to prevent hospital-acquired infections.

Another new Enterprise Fellow, Dr Enass Abo-Hamed, CEO at H2GO Power, invented a clean, efficient and affordable hydrogen-storage solution made from innovative smart nanomaterials. She hopes that the battery will help some of the 1.2 billion people in the developing world who do not have access to a reliable power supply for cooking, lighting, studying or medical treatment.

The 2017 Enterprise Fellows are the fourth cohort of engineers to receive support from the Enterprise Hub since it was established in 2013, following in the footsteps of alumni who, between them, have established 45 startup companies, generated 150 jobs and raised over £30 million in follow-on funding. 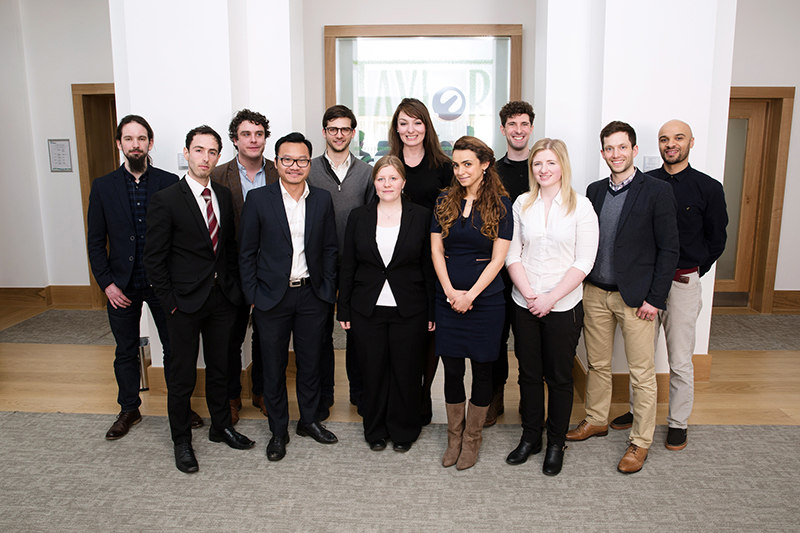 The 12 inventors who were awarded Enterprise Fellowships in 2017

UK Robotics Week is returning for a second year between 24 and 30 June 2017 to showcase leading UK technology in robotics and autonomous systems. It will offer activities for people of all ages across the country, including open days and lectures, film premieres, competitions, cutting-edge robotics demonstrations and exhibitions.

This year’s Robotics Week is focused on five central challenges that aim at promoting creative solutions, inspiring tomorrow’s technologists, and pushing the boundaries of robotics and autonomous systems innovation.

Events include the premiere of Extreme Environments Challenge 2017, a film that demonstrates how robotics and autonomous systems can be used in emergency and disaster response. The Surgical Robot Challenge 2017 will showcase live demonstrations of surgical innovations from around the world. Another two-day event focuses on infrastructure, by bringing together academics, industry, policymakers and stakeholders to explore future use of both air and ground robots in the creation, inspection, repair and maintenance of critical infrastructure. There will also be a demonstration of a Pepper robot to show the latest developments in social care technologies.

One of the robots to be showcased at Robotics Week is MiRo, a fully programmeable autonomous platform that is suited to developing companion robot animals © UK-RAS

The week will also feature a School Robot Challenge 2017, a competition aimed at inspiring schoolchildren through computer-aided and bio-inspired design.

As part of Robotics Week, the Royal Academy of Engineering will be hosting an Innovation in Haptics event to showcase a selection of the most recent advances in haptic technologies and virtual reality across all sectors. The half-day event will feature talks on how new haptic interfaces are being used to replicate real-world environments, within which new autonomous vehicle concepts can be tested, and how haptic devices are being used to help build synthetic viewing systems and simulations of complex operations involving robots. 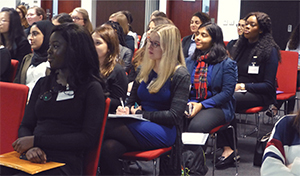 Employers, schools and colleges, engineers and professional engineering institutions are being encouraged to hold events, such as opening engineering workplaces for student careers visits, asking women engineers to give talks in schools or organising networking events.

The Royal Academy of Engineering is marking the day with a short film that profiles five women engineers under 35 from Mozambique, Uganda, Palestine, Germany and the UK. All of the role models featured in the film have been actively involved in the Academy’s activities and have followed varied routes into their careers in STEM. Focusing on the INWED theme of ‘men as allies’, the film will also highlight the important role that both women and men can play to help improve diversity in engineering.

More information about INWED and resource packs can be found at www.inwed.org.uk. The film is available to view from 23 June at www.raeng.org.uk

The Royal Academy of Engineering has announced 17 projects that have been awarded funding under its Ingenious public engagement programme, including hands-on workshops, connecting engineers and teachers, and stage shows.

The latest round of projects are set to take place across the UK and will provide new opportunities for members of the public to meet professional engineers and learn about the exciting, creative work they undertake.

Projects include graduate engineers establishing a ‘young inventors’ club’ based at the Museum of the History of Science in Oxford, which houses a collection of everyday technology including clocks, cameras and calculators. Another project that works with young people is the ‘sludgy stuff’ engineering roadshow, which will take a team of researchers into schools and festivals to explore the world of sludge – materials such as custard, paints, magma and cement that present unique engineering challenges because of their unpredictable behaviour – with hands-on activities. 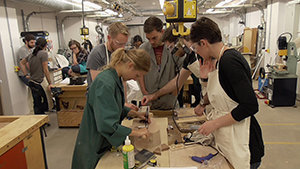 Participants take part in a 2016 Ingenious project that gave them the chanceto work with engineers in the process of designing and building an electroacoustic guitar, amplifier and speaker system

Ingenious projects for adults include a free two-day event for Kent residents to learn more about the world’s largest offshore wind farm, allowing local people to work alongside windfarm technicians and engineers to design their own turbines while learning about the technology and associated career opportunities.

The Ingenious awards scheme aims to inspire creative public engagement with engineering. The scheme is supported by the Department for Business, Energy and Industrial Strategy, and has funded over 189 projects to date, providing opportunities for over 5,000 engineers to take part in public engagement activities that have reached over 2.5 million members of the public.

A profession-wide collaboration, led by the Royal Academy of Engineering, has produced a response to a recent Green Paper on industrial strategy.

The report emphasises that long-term collaboration and UK industry, academia, government and investors working together as a system to achieve sustainable growth are important factors in the success of the industrial strategy.

The report, Engineering an economy that works for all, calls for the strategy to focus on a long-term vision that harnesses the UK’s international reputation for engineering excellence and forges a new global identity for Britain as a top destination for inward investment and global talent. It calls for the government to set a target of 3% of GDP combined public and private R&D investment, and to maintain the current level of infrastructure funding after the UK leaves the EU.

The report also asks that government broadens the strategy to encompass developing skills, as well as addressing the shortage of teachers in STEM subjects in both primary and secondary schools. It recommends a focus on promoting STEM subjects and engineering careers to under-represented groups to fully unlock the talent potential in the UK.

Professor Dame Ann Dowling OM DBE FREng FRS, President of the Royal Academy of Engineering, says: “A good industrial strategy will not make government intervention more likely, but it will make it more predictable – and that builds confidence and encourages business investment. The strategy must be long term and sustained, with cross-party and whole government support.”

The main points in the report were sent to the manifesto teams of the main political parties.

To read the report in full, please visit www.raeng.org.uk/industrialstrategy

The technology behind 'The Tempest'

Motion-capture technology that is usually used on film sets is being employed live on stage to bring elements of Shakespeare’s play to life.

The Airlander is the world’s largest aircraft and, when in flight, can stay in the air for weeks at a time if necessary.