Hydroponics, growing plants without soil in nutrient-enriched water, is a technique that has been used in some form for centuries. The approach has gained popularity over the last decade or so and has been used to grow various crops across the world. As the global population grows and food security is threatened, its faster growth and larger yields have become increasingly important.

Suffolk manufacturer Aponic, led by former aviation engineer Jason Hawkins-Row, has developed a food-growing system based on the same principles as hydroponics. Its method allows plants to be grown in vertical columns with the roots in air, which is more efficient and sustainable than using water. 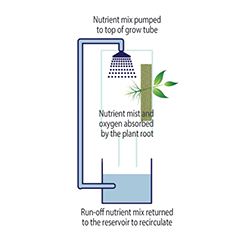 In Aponic’s system, nutrients are sprayed directly onto the roots of plants. Excess water and nutrients are recaptured and recycled

As part of the NIAB (National Institute of Agricultural Botany) Innovation Hub, Aponic is developing collaborative relationships with universities and research facilities to deliver the growing systems and training in developing countries where there are problems such as limited infrastructure, water shortages or bad soil.

Jason’s interest in natural eco-systems began when he became involved in projects that looked at natural methods of rainwater recycling and water purification. The inspiration for the growing system came when his fruit and vegetables were stolen from his allotment, which encouraged him to ensure that his food was grown securely.

The company’s aeroponic system holds plants by the roots inside vertical growing tubes filled with air. Every 20 minutes, a mixture of water and nutrients is automatically sprayed onto the roots for 10 to 15 seconds. The overall spraying time for the plants totals just 18 minutes each day. As it uses so little power, the system can be run ‘off grid’ by electricity generated by solar or wind, meaning it can easily be used in developing countries or in places with an unreliable energy supply. 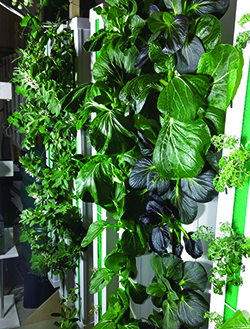 The nutrient and water mix is recycled through the tubes and fully used in the growing process, which reduces water usage by an average of 90% compared to traditional growing methods. Aeroponic systems have even been used by NASA, as they can successfully produce food in both zero and artificial gravity environments.

This type of ‘vertical farming’ allows crops to be produced on smaller land area: 12 or more plants can be grown in the same space it would take to grow one plant in soil. Systems can be placed in greenhouses, barns and outbuildings, and vertical farming is popular in urban areas, such as industrial units and abandoned buildings.

Planting, tending and harvesting are easier for operators, who can work comfortably in a standing position. Removing soil from the equation means that there are no slugs, soil pathogens or weeds, reducing the cost further by removing the need for weed-killers. The pH of the water that the plants receive can be controlled, and the nutrients can be carefully adapted to the different stages of growth, so that growing conditions are optimal. If the system is used indoors, then temperature, humidity and light can be controlled, and matched with a nutrient regime and CO2 injection regardless of season, environmental conditions or geographical location. This has implications for seasonal crops, and means that commercial farmers can consistently produce perfect crops to a reliable timescale.

As the UK currently imports 48% of its fresh food, Aponic hopes to reduce the need for imports and increase sustainable food security. It has recently developed modularised freight units to be stacked in barns or installed in growing containers to produce low-input, high-value output modular farms that are being sent all over the world. It is also working with large tech companies to develop a remote control and monitoring system to develop completely traceable produce.

The Airlander is the world’s largest aircraft and, when in flight, can stay in the air for weeks at a time if necessary.