The award was founded by the MacRobert Trust and first presented in 1969. Every submission is reviewed by a panel of judges drawn from the Academy’s Fellowship and across engineering. The award honours the winning company with a gold medal and the team members with a prize of £50,000. Here, Ingenia showcases the three finalists for this year’s award in alphabetical order. The winner will be announced at the Academy Awards Dinner on 29 June 2017.

Security software traditionally relies on reinforcing the perimeter of the computer network, in an attempt to stop cyber attackers from gaining access to internal systems. It is reliant on predefining what ‘malicious’ looks like, applying rules or signatures that identify known threats. However, insider and advanced threats have proven capable of overcoming the increasingly porous border because they are not predictable and blend into the background of day-to-day network activity.

Darktrace’s Enterprise Immune System, developed by mathematicians and software engineers from the University of Cambridge, is a technology platform that uses unsupervised machine learning to defend organisations against advanced cyber-attacks from within computer networks, by identifying their emerging indicators.

By applying unsupervised machine learning to the evolving challenge of cyber security, Darktrace has developed a new approach that addresses this problem in a more effective way.

The Enterprise Immune System works on the principle that all networks are ‘compromised’ to some extent. The technology works by using unsupervised machine learning algorithms to form an understanding of what represents ‘normal’ activity for every user, device and network. Based on this evolving ‘pattern of life’ for an organisation, the AI algorithms can identify what is ‘abnormal’ and likely to be suspicious or threatening activity and can issue an automatic response akin to ‘digital antibodies’ to neutralise an attack that is in progress. The technology works in real time and continually refines its understanding of ‘normal’, which means that it recalibrates its assumptions in the light of organisational evolutions.

The ability to continually learn and update its understanding, based on evolving evidence, is key to the innovation. Machine learning can be hard to get working outside of labs in real-world, live data scenarios. While no two networks are alike, Darktrace overcomes the challenge of learning ‘normal’ for environments as diverse as industrial control systems, banking infrastructures and small businesses, without requiring configuration or manual tuning. 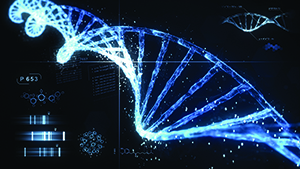 Similar to the human immune system, the principle of the Enterprise Immune System is to continually learn what is normal for its environment and detect early indicators of threats, before they escalate.

Cyber risk is at the top of the international agenda, as high-profile breaches raise fears that cyber-attacks and other security failures will endanger the global economy. Therefore, defending both organisations and individuals is important in order to safeguard enterprises, industries and jobs, as well as protecting critical infrastructure.

In addition to the threat of data loss, Darktrace can defend against attacks on the integrity of data. Amid political upheaval in many parts of the world and a loss of confidence in public authorities, Darktrace shines a light into complex environments and helps catch attacks in their nascent stages. In doing so, it can help restore the public’s confidence in organisations as diverse as banks who manage their bank balances and healthcare providers that produce blood test results – systems that rely on data being scrupulously accurate.

Darktrace has grown rapidly since its foundation in 2013. To date, the company’s AI technology has been deployed over 2,400 times across 60 countries. Its customers include BT, the Church of England, Drax, Irwin Mitchell, and British Land. Its largest customer employs more than 100,000 people while the smallest employs less than 10.

The company’s own employee head count has also increased steeply to accommodate demand for the product, doubling in the space of a year from 130 employees in January 2016 to more than 400 employees across 24 global locations.

Raspberry Pi devices, and the Raspberry Pi Foundation, are helping more people learn about computing and digital making by providing opportunities for creative computing across the curriculum and beyond.

Around the turn of the millennium, university computer science courses began to see a dramatic decrease in the number of applicants. As personal computers and games consoles became more complex, fewer young people felt able to access the ‘back room’ workings of computers, reducing the number of hobbyists. At the same time, computer programming was not widely taught in schools. 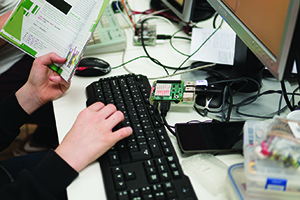 Wanting to show future generations that computers could be used creatively, the Raspberry Pi Foundation began working on an innovation to promote programming education: low-cost, high-performance computers that people can use to learn, solve problems and have fun.

The Raspberry Pi is a credit-card-sized microcomputer, comprising a 1.2 GHz (gigahertz) processor with graphics capability, audio and video output, and a USB port for generic peripherals such as a mouse and keyboard. The idea for the computer was developed by Eben Upton, a computing graduate from the University of Cambridge, while he was working for Broadcom – a major vendor of video and graphics chips for mobile phones. Upton realised that adding a conventional central processing unit (CPU) to the multimedia processor would transform it into a general-purpose computer. As the original design was developed for mobile phones, the board was credit-card sized, had low power consumption, and could be engineered for low cost and volume production.

This system evolved into the Raspberry Pi, which went into production in 2011 and was successfully launched in February 2012. Twenty times more units were sold than expected and production had to be increased to meet demand.

Several models of the computer have been released since 2012, and all feature a Broadcom system-on-a-chip (SoC), which includes an ARM-compatible CPU and a graphics processing unit. The CPU gives access to the myriad of programming languages, device drivers and applications available in the Linux operating system’s community, such as Scratch and Python. It is this system that allows people to experiment.

The Raspberry Pi Foundation is a charitable organisation and all of the profits generated from sales of Raspberry Pi devices are used to fund its outreach and education activities. These include Code Club, a worldwide network of over 10,000 after-school computing clubs for children aged between nine and 11, which is soon to expand to support ages up to 13, and Picademy, a two-day intensive teacher training programme that has reached over 1,000 teachers and 100,000 students since 2014.

By providing a cheap general-purpose computing platform, preloaded with programming software and accompanied by high-quality educational resources, Raspberry Pi has lowered the barriers to entry for young people interested in pursuing a career in engineering and helped inspire young people to take an interest in computing. Since 2012, there has been a dramatic recovery in the number of applicants to university computer science courses, which can be attributed in part to the efforts of Raspberry Pi and its partner organisations.

The computer was initially developed for the education community, but its audience has grown to include hobbyists, as well as being used in industrial and commercial applications, from creating video games to robots, multi-room sound systems, pet feeders, or even science experiments. The flagship model costs $35, with a simpler model at just $5, and more than 12 million have been sold across the world since its launch – making it the most successful British computer ever.

Vision RT’s AlignRT system tracks a patient’s position before and during radiotherapy to maximise comfort and treatment accuracy, and can even reduce the need for permanent tattoos on patients.

More than one in three people will have cancer at some point in their lives, and around half of them will require radiation therapy, which often successfully cures patients. 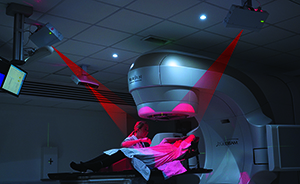 Radiotherapy works by destroying cancer cells using high-energy photon beams, but these beams can also be harmful to healthy tissue. Therefore, healthcare professionals do their utmost to ensure that only the target area receives the radiation dose. However, slight movements that patients naturally make during treatment are almost impossible to detect, and these can lead to radiation damage to healthy tissue and potential long-term health problems. Historically, patient position during treatment was monitored by treatment staff via closed-circuit television, but this method is unable to pick up such small movements.

In a bid to make sure that radiotherapy is delivered as accurately as possible, Vision RT developed AlignRT, a completely non-contact system that continuously tracks the patient’s position in 3D before and during treatment with sub-millimetric (better than one millimetre) accuracy.

Three AlignRT stereoscopic camera units are ceiling-mounted in the radiotherapy treatment room. They project a pseudorandom pattern onto the surface area of the patient’s body, which is picked up by the cameras and used by software to reconstruct a 3D model of the surface area in real time. This is then compared to a 3D surface reference model, from a previous X-ray or CT (computed tomography) scan, to determine any movement from the patient’s ideal position.

This real-time 3D mapping of the surface gives directions so that the patient can be positioned faster and more accurately. During treatment, the AlignRT system senses movement from the patient, caused by breathing for example, and automatically pauses radiation delivery, preventing damage to healthy tissue.

The AlignRT system helps improve the speed of treatment, ensure the accuracy of radiation delivery and enhance patient comfort. Without surface-guided radiation therapy, permanent tattoo reference points on the patient are usually required to mark the correct position for treatment, and these remain a permanent reminder for patients of their cancer. Now, centres can reduce or even eliminate the use of tattoos.

AlignRT also enables an effective ‘breath-hold’ treatment for breast cancer. Damage to the heart is a serious potential complication for breast cancer radiotherapy patients, because of the left breast’s proximity to the heart. AlignRT can monitor when a patient takes a deep breath, which moves the heart away from the chest wall, and thereby ensures that the radiation is only delivered to the breast, and not the heart, while the patient holds their breath. A recent clinical study showed that 0% of patients who were treated with the guidance of AlignRT experienced damage to heart blood supply, in comparison to 27% in a previous study using traditional techniques.

Vision RT was founded in 2001 in an attic in north London, and is now the market leader in surface-guided radiation therapy, with nearly 1,000 systems in use across the world, including multiple units within the NHS. The company is profitable, having experienced growth of 260% between 2013 and 2015. In 2016, it was awarded two Queen’s Awards for Enterprise – one for international trade and its overseas sales growth, and one for innovation. Vision RT employs around 140 people and is continuing to expand its operation as the clinical use of its products and its revenues increase.

The technology is used in many cancer centres around the world (including all of the top five cancer centres in the USA) for a wide range of cancers, including breast, brain and lung, and its clinical value has been evidenced in more than 60 peer-reviewed papers.

The technology behind 'The Tempest'

Motion-capture technology that is usually used on film sets is being employed live on stage to bring elements of Shakespeare’s play to life.

Growing plants without soil is transforming how crops are grown across the world.

How I got here - Dr Sabesan Sithamparanathan

Dr Sabesan Sithamparanathan is Co-founder and CEO of PervasID. His company provides radio-frequency identification (RFID) readers for low-cost, long-distance sensing of passive RFID tags, for use in tracking in retail, security and healthcare.