The Arclight is an affordable, solar-powered ophthalmoscope, a diagnostic tool that is used by health workers to view the interior of the eye and detect early signs of blindness. The device was developed over five years by researchers at the University of St Andrews. Its compact size and small price tag, coupled with its ability to harness solar power, mean that it can be useful to clinicians working in low-income and remote locations.

Ophthalmoscopes are essential for diagnosing nearly all eye abnormalities, enabling skilled users to see the front and back of the eye and revealing conditions such as cataract, glaucoma and trachoma, which can all cause blindness. The instruments can be expensive, so availability can sometimes be limited. Around 220 million people around the world are visually impaired or blind, 80% of whose blindness would have been avoidable if treated, according to the World Health Organization.

Optometrist William J Williams, who is Director of Arclight Medical and an Honorary Research Fellow at the University of St Andrews, set out 10 years ago to produce a portable, intuitive and affordable diagnostic tool. He came up with the idea for the Arclight by stripping unnecessary features from a traditional direct ophthalmoscope.

Supported by a team at the university and awarded £100,000 from The Fred Hollows Foundation, his breakthrough was swapping the traditional filament bulb, which can be difficult to replace in remote communities, for a cool, low-energy LED. The design eliminates the need for the mirror and optics inside conventional ophthalmoscopes, replacing them with an LED facing the patient. This is closely aligned with a sight-hole that produces near coaxial light paths to give the user a dust-free view of the eye’s interior. Clinicians can also use a slider on the device to focus and adjust its lighting level. 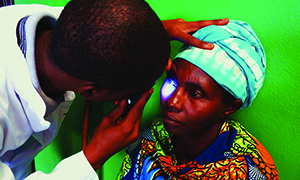 The current instrument includes a slot-in PCB (printed circuit board) module that has a micro USB port, and lenses so that it can be charged if needed, while an integrated solar panel means that it can be used as an ‘off-grid’ diagnostic tool. When a small plastic tube is added to the magnification loupe, the Arclight can be transformed into an octoscope to diagnose hearing conditions.

A study led by the International Centre for Eye Health in London revealed that the Arclight is at least as good as traditional ophthalmoscopes, and is better in some areas, such as size and ease of use. It has been listed as one of the International Agency for the Prevention of Blindness’ recommended devices for use in low- and middle-income environments. More than 10,000 Arclights have been distributed in over 50 countries, including Malawi, Ghana, Ethiopia, Rwanda, Fiji, Indonesia and the Solomon Islands.

While this version of the Arclight is already changing lives, version three will include internal memory loaded with teaching resources for clinicians in remote areas. The teaching tools can be viewed by attaching a mobile phone without the need for an internet connection.

The company hopes that Arclight will become more widely available in communities where it is needed. By selling the devices to doctors in richer countries at a profit, a social enterprise run through the University of St Andrew’s global health team have helped to fund the roll-out of cost-price devices in poorer communities. 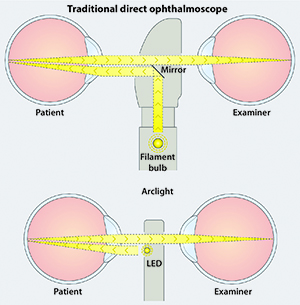 Chips that changed the classroom

The Raspberry Pi has won the MacRobert Award 2017 for its innovative pocket-sized computer, which has changed how people are learning about coding.