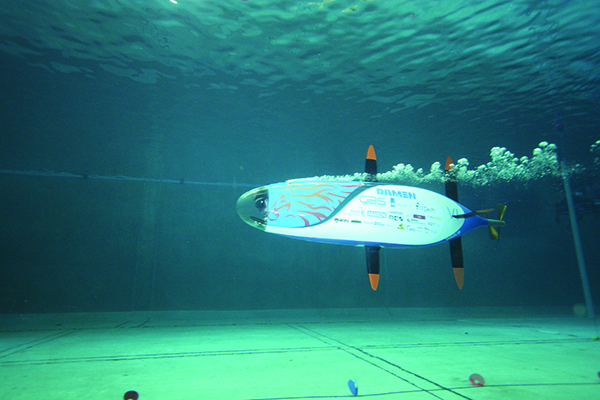 The fastest submarine that took part in the 2016 European Submarine Race was WASUB 6 from Delft University of Technology in the Netherlands, which was propelled by contra-rotating propellers (above). The University of Auckland’s Taniwha submarine was second fastest but scored better in its design report and reliability, winning the competition by a narrow margin

In 2012, a group of British engineers brought to the UK a competition that sees university students design, build and power their own submarines to race against each other. Sir Robert Hill KBE FREng, head of the judging panel, discusses the competition, while Iain Anderson describes the engineering behind his team’s submarine that won the 2016 competition. 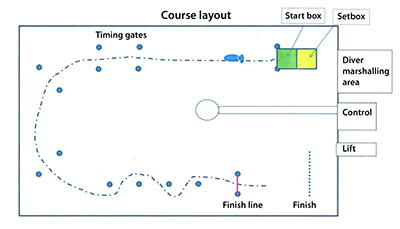 QinetiQ’s Ocean Basin test facility is 120 metres by 60 metres, with a constant depth of 5.5 metres. Due to the size and shape of the tank, the course can be more challenging than the one used in the US competition. After a straight run to the 10-metre timing section, the course follows a long curve to port then returns to the starting end through a slalom section that is designed to test submarine manoeuvrability, creating a total course length of about 200 metres

In the early 1990s, Florida Atlantic University conceived an event that could be described as the world’s toughest university competition. It asked students to design, manufacture and then race submarines that were powered only by humans. For the purpose of the competition, the submarine would need to be a flooded underwater vehicle that fully enclosed the pilot and all propulsion and control mechanisms, operating entirely beneath the surface of the water, and powered by a propeller, jets or fins.

The first three competitions were held in the sea off a Florida beach, but since 1995, the International Submarine Race (ISR) has been held biennially in the David Taylor Model Basin at Carderock, Maryland, one of the largest ship model basins in the world, and has continued to attract an increasing number of international competitors. In 2015, 24 university teams took part and the event was won by a team from Delft University of Technology in the Netherlands, with a world record speed of 7.4 knots.

The competition has been running for more than 20 years and still inspires a wide variety of designs. The only common design feature is the position and posture of the pilot, who is usually lying prone in the front of the hull, facing forward, with legs pedalling.

THE CHALLENGE OF THE RACE

Competitors in the European International Submarine Race must successfully negotiate a winding course in the shortest time while fully dived, neither penetrating the surface nor hitting the bottom.

To comply with the rules, student teams must design and make:

• a hull (or body) that completely encloses a sub-aqua diver, the pilot, and the propulsion and control mechanisms. This results in the pilots lying prone, face down and using their legs to provide the propulsion and hands to operate the controls. The submarine is not watertight, but fully flooded (open to outside water)

• a mechanism, propeller or fins that converts energy expended by the pilot into a means of propelling the submarine through the water

• a submarine that is neutrally buoyant with its pilot inside, so that when it is stopped underwater, it does not rise to the surface or sink

• a transparent portion of the submarine’s hull that allows the pilot to see forwards, side to side and down. 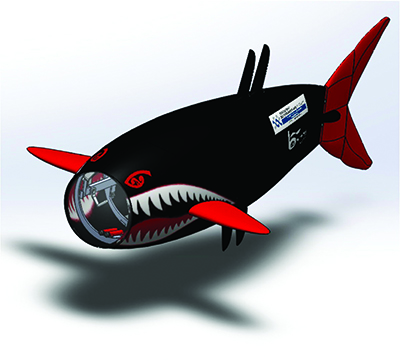 The shape of the submarine’s hull should have low drag and it is now common for the designers to use computational fluid dynamics to do this. A second requirement is that the nose of the hull should have enough transparency for the pilot to be able to see the course and the markers. A fully transparent nose cone can be seen on this CAD drawing of the original concept for Taniwha with dive planes at the front and fish-like rudder. Prior to the 2014 races, the rudder was modified to a more paddle-like rectangular shape to reduce drag

In recent years, the competition has spread beyond Florida and a European competition is now held in the UK. In 2011, a meeting between engineers from the Institute of Marine Engineering, Science and Technology, and QinetiQ led to the latter agreeing to hold the European competition (eISR) in its Ocean Basin ship model test tank, Europe’s largest, in the Marine Park, Gosport.

The competition has been running for more than 20 years and still inspires a wide variety of designs. The only common design feature is the position and posture of the pilot, who is usually lying prone in the front of the hull, facing forward, with legs pedalling.

Most of the submarines entered into the competition are propeller driven and have a single pilot. However, a few two-person submarines have also been entered. Another type is the highly innovative non-propeller, biomimetic designs that take their inspiration from fish.

Having competed at the 2014 competition, the 2016 event was Team Taniwha’s second trip to Gosport. The submarine entered in 2014 proved to be very unstable, crashing into the bottom or breaching the surface, and the vessel experienced frequent breakages in the string cables that linked the pilot’s control levers to the rudder and dive planes.

One of the central problems faced by the original Taniwha submarine was stability. The 2016 Taniwha dive planes were at the back for improved stability (a), unlike the 2014 unstable sub that had dive planes at the front (b)

This instability resulted from the dive planes being placed too far forward along the hull. If, for instance, the submarine began to lift its nose up a little, the forward-mounted dive planes introduced a lifting force that would make matters worse. A shark’s pectoral fins are at the front, but they can bend their bodies up and down and side to side, have quick reflexes and a superb sense of balance to control their swimming. Without such sensory systems evolved for underwater navigation, the Taniwha’s pilot could not counteract a nose-up or nose-down orientation in time to stop the sub from continuing to rotate beyond the point of no return. To improve stability, the dive planes were moved towards the aft end of the submarine.

Taniwha’s features include a multi-segmented rear body for steering, foot-powered dorsal and ventral fins for propulsion, hydraulic controls and hydro-brakes that fold out

The team also replaced the string system of cables that was prone to breaking with hydraulic lines that used water-filled pneumatic (air) cylinders, which resulted in a more reliable control system. The effectiveness of both changes was demonstrated at the 13th International Submarine Race held in the USA in June 2015. Travelling along the 100-metre straight line course past a timing gate, the Taniwha completed 10 of 11 runs with a top speed of 3.65 knots, slightly less than two metres a second, the speed of a brisk walk.

In preparation for the UK-based race, the team decided to substantially improve Taniwha’s ability to steer, taking another lesson from the leatherjacket fish, which uses its rear body and tail for propelling itself forward and steering. As well as being novel in the competition, steering by body bending proved to be extremely effective. The submarine’s multi-segmented body could be made to bend around in a smooth curve, using one hydraulic cylinder. The bendy body segment was covered with a neoprene skin that could be unzipped and removed for inspection of the drive. This version also included hydraulic brakes that popped out from the sides of the hull.

The competition takes place over a two-week period. Submarines arrive at the start of preparation week, during which the marks of the course are laid, underwater timing cameras are positioned, safety nets are put in place and each team is allocated a workshop bay on the side of the Ocean Basin. Judges conduct a dry inspection, awarding marks for the quality of manufacture, and the teams’ pilots and support divers have the opportunity to conduct tank familiarity dives. This is followed by wet inspections with QinetiQ’s dive coordinator checking that teams can, among other things, release the emergency buoy and demonstrate correct starting procedure. QinetiQ also carries out risk assessment for the competition and provides the staff and workshop facilities to ensure that the event runs as smoothly as possible.

The outcome of the competition is not decided by speed alone, with marks awarded for the quality of the design report provided by each team, quality of manufacture, the standard of safety features and diver information, and reliability.

During the second week (race week), the competitors attempt the course, with judges plotting every submarine’s track and recording any faults. The Taniwha increased in speed during the week, reaching a top speed of 4.7 knots on the Thursday afternoon after some small adjustments were made to the stiffness of the fins and the team taped over every hole in the body to improve hydrodynamic efficiency.

The slalom is made harder each day by offsetting alternate marks. As a finale, submarines that are still operational attempt two rounds of the course. Taniwha qualified for this event, but it meant that double the amount of air was required. A 10-litre bottle was substituted for the submarine’s five-litre bottle, but the larger bottle interfered with the pilot’s leg movement and hampered speed.

Underwater cameras are used to take measurements of speed through the 10-metre timing section as well as the overall time and scoring is based on the principle of ‘fastest time with least faults’. At the end of each day’s racing, submarines are ranked and marked accordingly. Despite the problems faced by the Taniwha team on the last day, it gained enough points overall to win and has its sights on the world record in 2018.

At the beginning of the race weeks, QinetiQ conducts a full safety briefing at the Ocean Basin before the dry and wet inspections take place. The teams’ pilots and support divers conduct tank familiarity dives under QinetiQ supervision. For the wet inspections, the support divers hold the submarine underwater with the hatch open, the pilot gets onboard, and the hatch is shut and secured. The pilot must then demonstrate that the emergency buoy can be released and float to the surface when ordered. The team must demonstrate the correct starting procedure: at the underwater command, support divers swim clear, the pilot counts to five seconds and then starts pedalling. The purpose of the procedure is to avoid any risk of a support diver being struck by a rotating propeller.

Safety divers in an electric RIB (rigid-hulled inflatable boat) track every submarine around the course, ready to enter the water and release the pilot from a submarine if it is in trouble and aborting the run.

The pilot carries an independent air supply of no less than three litres, which is enough to enable the pilot to exit the submarine and swim to the surface. The primary air supply is carried on board the submarine and must have double the capacity required to complete a run.

Sir Robert Hill KBE FREng is head of the eISR judging panel. He retired as a Vice Admiral in 1993, after spending 37 years as an engineer officer in the Royal Navy, serving in surface ships and submarines and becoming Chief Naval Engineer Officer and Director General Submarines in the MoD.

To find out more about the competition, please visit

*To see the submarine in action, please visit www.youtube.com/watch?v=BKBIOe0t_Mc