How I got here - Anna Ploszajski

Growing up, my career aspirations varied wildly, from architect to classical trumpet player. I was an all-rounder academically, but I chose to study maths, further maths, physics and music at A level, aiming to study physics at university – nobody told me about engineering. When I applied to the University of Oxford, its materials department was low on applicants, so they invited me to interview for both subjects. To cut a long story short, on Christmas Eve I received a letter offering me a place to study materials science at Oxford. Rapid Googling ensued, but I accepted the place, and this happy accident saw me spend four years studying the best subject in the world. For me, it was the perfect blend of hard science and practical engineering applications. I became obsessed, but was sure to maintain a healthy balance of staying out too late and playing my trumpet in every musical group I could find. 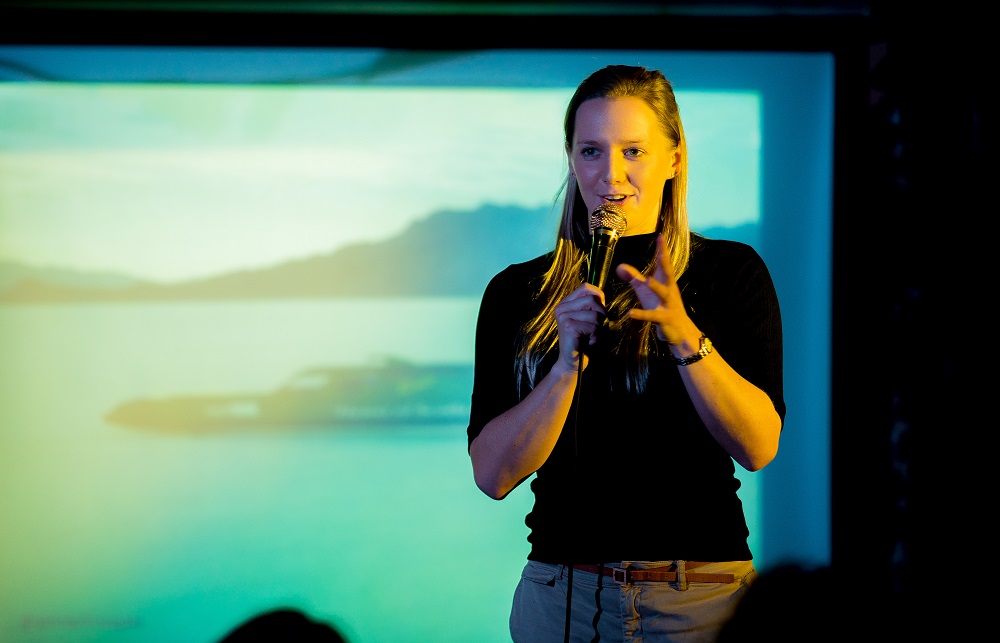 I spent my fourth year at Oxford researching hydrogen storage composites with a local spin-out company, Cella Energy. I loved flexing my new materials muscles in such a fast-paced environment and my voice was really valued; in fact, my work was central to the patent that the company is now based on. I was certain that I wanted to be an industrial researcher, but I needed a doctorate. Cella Energy sponsored me through an engineering doctorate (EngD) at UCL, which is an alternative to a traditional PhD that involves PhD-style research while working directly with a company. I also took a course in public engagement run by Steve Cross, then head of public engagement at UCL, and was somehow convinced to participate in Bright Club, a stand-up comedy night from academics and researchers. It wasn’t a complete disaster so I did it again and again. For the last year, I’ve been a member of Steve Cross’s Talent Factory, a group of up-and-coming science communicators, which has helped this side of my career to really take off. I now split my time between finishing my EngD and working as a freelance writer, communicator, trainer and stand-up comedian focusing on materials engineering.

Being awarded an RAEng Engineers Trust Young Engineer of the Year Award was a really nice recognition of my contribution to engineering so far. Balancing doctorate work by day and stand-up comedy by night has been taxing, and it wouldn’t have been possible without the support of the Talent Factory and a very understanding supervisor. It was a real privilege to be recognised next to four other astoundingly impressive early-career engineers and I hope it will open the door to me being involved in other Royal Academy of Engineering activities.

I imagine that being a materials engineer is similar to being a talented photographer, in that you find beauty in the everyday environment. For example, I love it when a component of my bike fractures and I can work out why, and people probably think I’m bonkers when I pick up random objects to find out what they are made from. My friends have recently developed a habit of pointing at stuff (clouds, beer, cats, and so on) and asking ‘is this a material?’. I pretend to be annoyed but I secretly think it’s a brilliant game because it makes you think about the stuff that’s around us. You have to zoom in and ask: what are these atoms up to that make this thing so heavy, so fluffy, so tasty? That’s materials engineering.

What does a typical day at work involve for you?

I’m training to swim the English Channel in July, so a typical weekday will start with an hour in my local lido. For the last few months, this has been followed by a good few hours working on my thesis. My latest experiment was really cool: 4D X-ray computed tomography on my hydrogen storage materials. In other words, I was watching the gas coming out of the materials in 3D, as a function of time. The analysis of the results has been quite involved but it’s been fascinating work. The freelance work is hugely varied, and that’s what I love most about it. Specific work booked in during the day might be delivering communications workshops to engineers or compèring a science-themed event for school-aged children. Other freelance work includes writing funding applications, preparing new comedy material, experimenting with new demos, writing for magazines, books and newspapers, producing my podcast or pitching for new work. In the evenings, I’ll typically be found performing stand-up comedy a couple of times a week, or at rehearsals with my bands or orchestra.

Can you tell me about your work promoting engineering?

Engineering in this country is suffering because of the poor public understanding of what engineers do and who they are. This is deeply engrained in our culture, and engineering needs a dramatic rebrand if we are to plug the widening skills gap. This is my mission, and I do this through as varied media as possible; there’s the stand-up comedy that has taught me about the importance of understanding and reading your audience, as well as general performance elements, such as body language and rhythm. I love writing because it gives me the time to be more creative with language than the live performances; I particularly enjoyed contributing a chapter about smart materials to Jim Al-Khalili’s book about the future called What’s Next? I produce my own podcast about materials called ‘rial talk. In each episode, I interview someone about a material that means something to them: a potter about clay, a vintage jewellery enthusiast about Bakelite, a dentist about mercury. The aim is to demonstrate that all these people are materials experts, and that engineering is everywhere.

Get making! At its core, engineering is about creating things to make the world better, whether that’s software, skyscrapers or new materials. Whatever interests you – music, gaming, eating cake – you can engineer it. There really is no substitute for getting your hands dirty and you don’t need much to get started. Drive your parents mad by taking stuff apart, they’ll forgive you later when you can fix their iPad for them.

What’s next for you?

Immediately after I submit my thesis, I plan to take the freelance engagement work full time for a few months. I’ve got some exciting large-scale projects planned and I’m interested to see how far I can go with them. I want to develop hour-long shows to take to schools and science festivals, as well as the Edinburgh Fringe Festival, and I’ve got the seeds of a book idea up my sleeve too. I am swimming the English Channel next July, which will require a bulky training regime, so freelancing will give me the flexibility I need for the best chance of landing in France. However, ultimately there’s nothing like being on the frontline of research, so I plan to find a postdoctoral position within the next year, with a slight change of focus to smart materials engineering and 4D printing.

The 2017 Queen Elizabeth Prize for Engineering was awarded to the four engineers whose individual contributions led to the creation of digital image sensors.

The technology used in drones is becoming more advanced as their use becomes more widespread.

Researchers from the University of Glasgow have created a small and affordable gravimeter - a device used to detect even the smallest changes in gravity.