Researchers at the University of Glasgow have adapted smartphone accelerometer technology to make the first small and affordable gravimeter, the Wee-g.

The Wee-g is based on technology that is used in mobile phones to measure acceleration. These devices are tiny mechanical structures made from silicon, and are called micro-electromechanical systems (or MEMS). MEMS accelerometers in phones are mainly used to measure which direction the phone is pointing in to rotate the screen when it is tilted and for apps such as compasses or stargazing. By using this technology in the Wee-g, Professor Giles Hammond and his team hope to make a gravity sensor that is significantly smaller and cheaper than those currently available.

Gravimeters are used to measure the Earth’s gravitational field. Existing models are large and expensive, which can often make them impractical. They are mainly used in the oil and gas industry to discover fossil fuel deposits and are usually based around a weight on a spring that is sensitive to tiny fractional changes within Earth’s gravity.

The new instrument is significantly smaller and centres around a weight hanging from microscopic springs. It is much more sensitive than the accelerometer found in a smartphone. The weight is made from a 0.2-millimetre-thick silicon wafer, with small silicon springs – 10 times thinner than a human hair – that hold the weight in place. When it is held vertically, gravity pulls the weight downwards. If the pull changes slightly, then the weight moves. This is measured by using a light and recording the movement of the shadow, which is detected by a photodiode, converted to current and recorded. As the springs are so thin, they are activated by tiny gravitational changes. 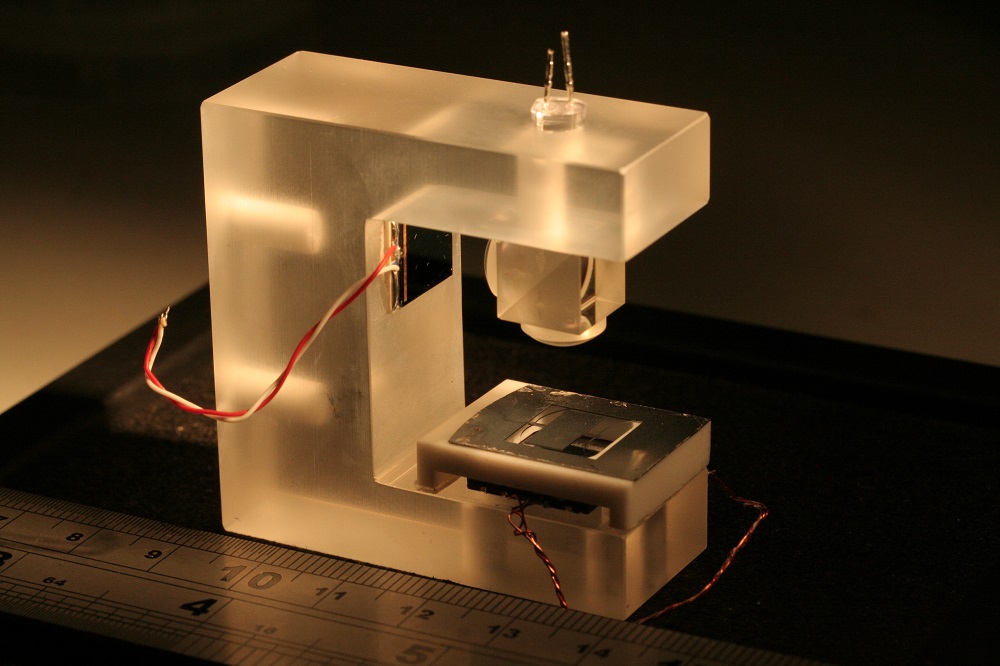 The micro-electromechanical sensor is made from silicon, and is used in the Wee-g to detect tiny changes in gravity

The Wee-g was initially tested by the University of Glasgow team by measuring the Earth’s tides over several days. Earth tides are similar to the tides that affect the sea, but they affect the Earth’s diameter. This means that Glasgow moves up and down by around 20 centimetres over 12 to 13 hours, resulting in gravitational acceleration that the team was able to measure. The change in gravity moves the tiny weight on the Wee-g’s springs.

As the Wee-g can detect very small gravity changes, it has several potential commercial uses. The device could be used for the environmental monitoring of volcanoes and magma build-up, providing an early warning system. It could also have uses in security and defence, for example in cargo scanning. The Wee-g could be used to conduct gravity surveys, detecting underground tunnels or sinkholes before land is purchased. Civil engineers could use it to detect such features as abandoned mineshafts, and the team believes that, in the future, gravity surveys could become as relevant as environmental surveys.

The researchers recently carried out tests of the device in the field, to confirm whether it worked as expected. This was done by measuring the change in gravity when moving the device to a different altitude (this works as moving higher increases the distance from the centre of the planet). The tests were carried out in two ways: firstly, by using a regular lift, and secondly by going up and down the Campsie Fells, a range of hills in Glasgow. The researchers saw a clear change in gravity between the top and bottom points in both settings, demonstrating that, as well being able to detect small changes in gravity, the device is useful and portable outside the lab.

An innovative sliding bridge in the Danish capital has transformed commuting for hundreds of pedestrians and cyclists, as well as becoming a tourist attraction.

How I got here - Anna Ploszajski

Materials engineer Anna Ploszajski has a sideline in stand-up comedy, which she uses to communicate the excitement of engineering to the public

The technology used in drones is becoming more advanced as their use becomes more widespread.