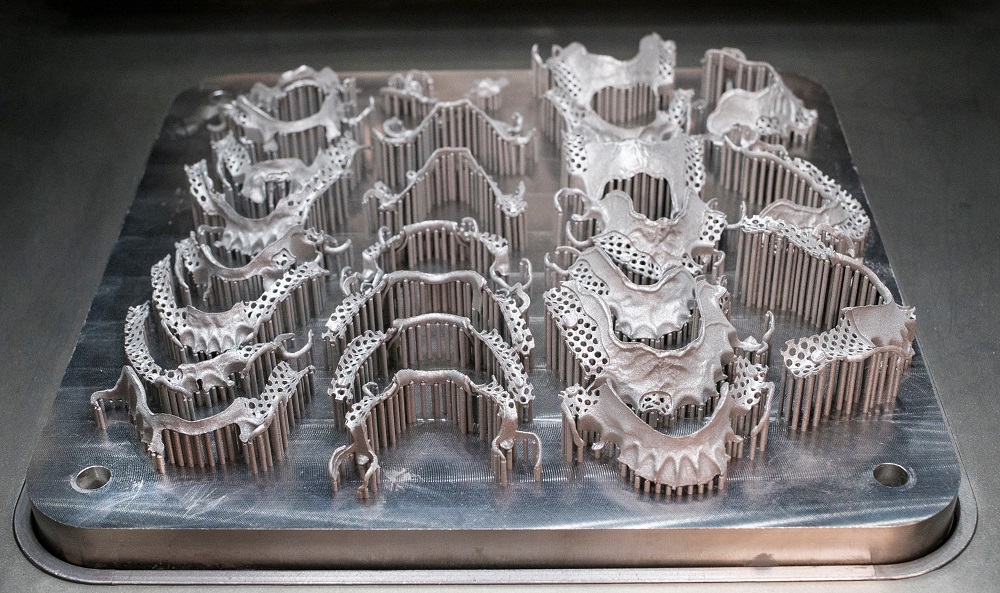 Multiple metal dental products on a build plate immediately after manufacture. The many ‘legs’ underneath provide support and help to dissipate heat during manufacture, and also support identification tags, all easily removable © Renishaw

Dentistry is a new frontier for the application of additive manufacturing – or 3D printing. The technology is able to produce components with complex three-dimensional geometry, such as those evident in dental frameworks. Engineer and freelance writer Hugh Ferguson investigates how it was introduced in the traditional, artisan-based industry of dental laboratories.

In the early days of additive manufacturing (AM), dentistry seemed a natural application. The three classes of materials most commonly used in dental appliances – ceramics, metals and plastics – coincide with those most commonly used in AM. This technique is also well-suited to creating bespoke products with complex geometry to high levels of accuracy. However, despite the initial enthusiasm, there was very little uptake.

The reasons lie in the network of dental laboratories that support dentists and their patients, by producing the crowns, copings, bridges, plates and dentures that dentists prescribe. Often small and employing skilled metal workers and ceramists, these laboratories have developed an understanding of the materials and techniques that meet the exacting standards required for dental products, embracing strength, accuracy, feel, appearance and affordability. Dentistry has a reputation for conservatism, an understandable reluctance to adopt new materials or techniques unless and until the benefits are proven.

So, engineers worked with the laboratories, not to supplant their existing methods, but to understand how their traditional techniques worked, and where and how AM could best be introduced to improve them.

As recently as the mid-2000s, the principal materials in a dental lab were gypsum plaster, carving wax and casting alloys. A flexible, negative mould (impression) of the patient’s upper or lower teeth would arrive from the dentist, and would be used to make a ‘positive’ plaster-cast model. A craftsman would then use this to create the shape of the required crown or coping in wax, which would then be cast in metal using the ‘lost wax’ method, a casting technique that may be more than 5,000 years old. Around the mid-2000s, dental labs began introducing CAD (computer-aided design) systems to scan their dental models and design crowns or copings in their own facilities, with a centralised milling factory manufacturing the items.

Over the following years, dental milling machines, ceramics and tooling have all improved and dropped in price, making metal-free aesthetic restorations affordable. However, metal alloys are still the predominant materials, with a compelling blend of affordability, suitable mechanical characteristics and evidence in use.

How could AM enter this well-established and fast-developing industry? The first issue was problems with CAD systems. Early systems usually used a proprietary format only readable with software developed by the original CAD vendor. This made it difficult to transfer data to the manufacturing systems, which were also not good at replicating non-uniform shapes and surfaces. The second issue was that the CAD files can have imperfections, and AM is particularly intolerant of errors in files. The issue of proprietary data files was solved between 2009 and 2010 as CAD programs became more open and could output a universally readable file format (in this case, STL). They also became more capable of replicating complex three-dimensional geometry. The challenge of providing data suitable for AM was addressed by improved software in all stages of the process, and including an ‘auto-healing’ feature to detect and correct errors. 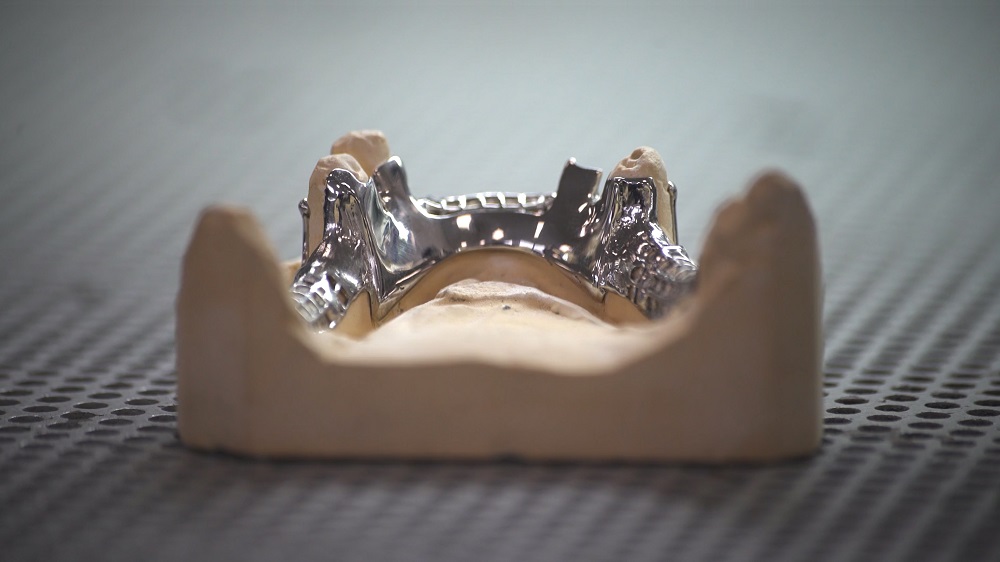 Could AM replace the milled ceramics for new teeth? Zirconia, for example, is expensive and cannot easily reproduce the translucence of natural teeth (or of dental porcelain). It can also obscure subsequent decay beneath the crown, and – despite its great strength – can be subject to micro-cracking. However, AM technology is not yet sufficiently advanced for practical application for ceramic teeth. Skilled ceramicists still create the finest aesthetic finishes, painting multiple layers of dental porcelain up to 1.5 to 2 millimetres thick over a metal (or zirconia) base and firing it in an oven to produce an excellent bond. This results in a strong and resilient tooth with a porcelain finish that can exactly match the colour and translucency of the patient’s existing teeth.

The focus moved to the metal parts. A crown, for example, may be made in metal, with the underside fitting snugly on the remains of the tooth that the dentist has shaped to form a foundation, and the upper part ready for the ceramist to add the porcelain coating. Larger items include bridges and denture frames. Dental labs were already equipped with CAD, which made the adoption of AM easier. An added driver was the shortage of skilled metal-working technicians and the escalating wages of those remaining: converting some of the metalwork to AM made business sense.

To be suitable for dental work, the material must be resistant to corrosion, acceptable by the human body, comfortable in the mouth and affordable. Its mechanical characteristics include a combination of strength, elongation, elasticity and resistance to fatigue. Casting alloys have gone through a long process of natural selection to come up with the right mix of properties. Cobalt chrome and nickel chrome became the most widely used, and labs had invested heavily in compatible porcelains so an unnecessary change was undesirable. The latter became the alloy of choice for low-cost dental frameworks as it is easy to cast; although nickel sensitivity in a minority of patients has become an issue. Titanium has excellent biocompatibility and is used extensively in the manufacture of dental implants, but dental labs find it very difficult to cast due to its low density and it can be hard to get porcelain to adhere to it.

The metal that best matches the labs’ requirements is cobalt chrome (CoCr), using laser powder-bed fusion (LPBF) AM technology. Within an LPBF system, a thin layer of CoCr powder is deposited as thin as 20 microns thick, on the machine’s build plate and a super-fine laser beam melts an area of the powder corresponding to a 2D slice of the CAD model. The build plate moves down, another layer of powder is added and the process repeats until the component is complete. The unfused powder is then removed and captured for re-use. For efficiency, labs will usually manufacture many items simultaneously, each with its own disposable identity tag.

AM-produced metal parts were originally considered too brittle for larger items such as removable dental frames, which are still used extensively where implants or bridges are either clinically unsuitable or unaffordable. However, the manufacture in an inert, argon atmosphere with less than 0.1% oxygen and a careful post-production heat-treatment process have helped to overcome this process.

The other principle objection is the high initial cost of an AM machine – around £250,000 to £500,000 – which smaller labs can address by collaborating to create the volume to bring cost-per-part down and justify the investment. Quality and accuracy have been found to match established materials and techniques, and in some respects (such as fatigue resistance for dentures) produce substantial improvements. Furthermore, AM provides better quality assurance and,
by reducing faulty products, cuts scrap rates and the need for ‘re-working’. It also substantially reduces material wastage, can reduce turnaround time for dentists, and can use the time of skilled technicians more efficiently.

AM is now firmly entrenched in dentistry, working alongside long-established craft-based techniques. This is an example of how beneficial, evolutionary change can be achieved by cross-fertilisation between an established industry and the providers of new technology.

Further adoption of AM is likely to follow. Already 3D-printed plastic models, created with help from a new breed of handheld intraoral scanners operated by dentists, are beginning to replace traditional plaster models. Within five years, AM technology may have advanced sufficiently, and the cost reduced, to allow AM-produced ceramic teeth to replace casting and milling. AM is also making progress in the related fields of maxillofacial surgery and orthopaedic surgery. Its application in printing patient-specific implants, protheses and medical guides could enable surgeons to deliver life-changing procedures that otherwise might not have been possible.

Hugh Ferguson spoke to Ed Littlewood, Marketing Manager of the Medical Dental Product Division, and Alex Harris, Applications Engineer, both from Renishaw, and Dr Silo Meoto from Aerograft to write this article. 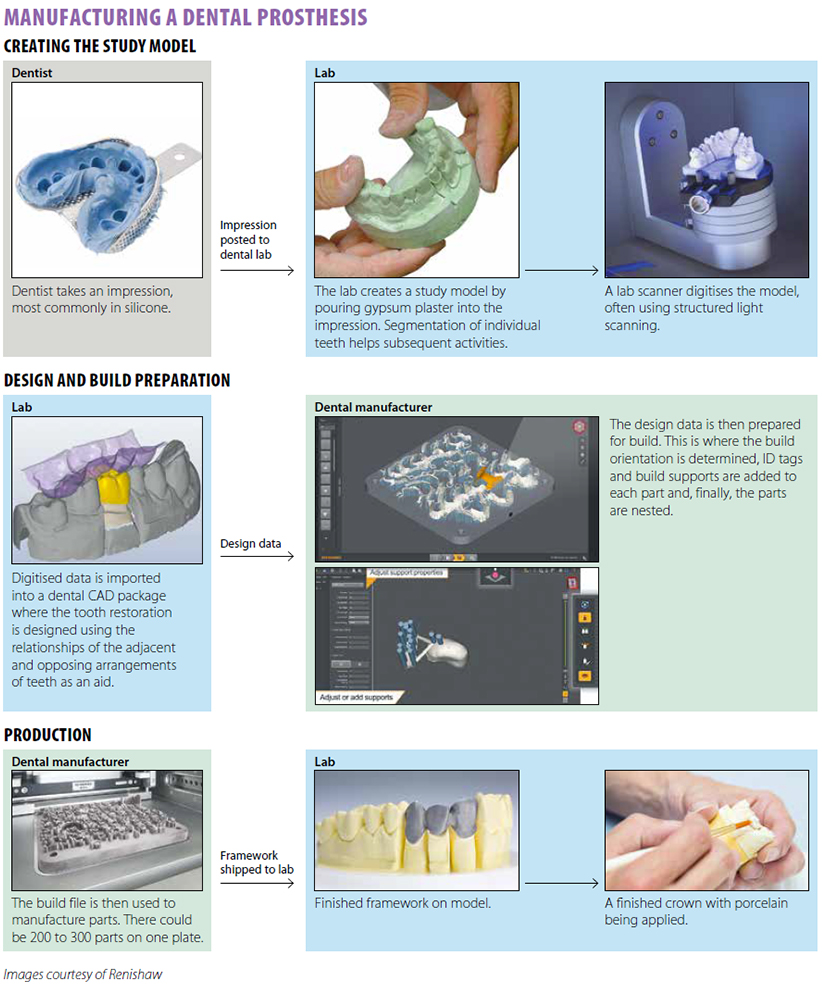 The reasons for birds flying in a V formation follow from the applications of aeronautics, fluid dynamics and energy minimisation.

Chemical engineering is enabling waste plastics to be recycled and converted to oil and wax products that can be further refined and used in several applications, including fuel and high-grade plastics.