Migratory birds such as ducks and geese fly in a symmetric V-shaped flight pattern, known (not unexpectedly) as a V formation. The reasons for this follow from the applications of aeronautics, fluid dynamics and energy minimisation. 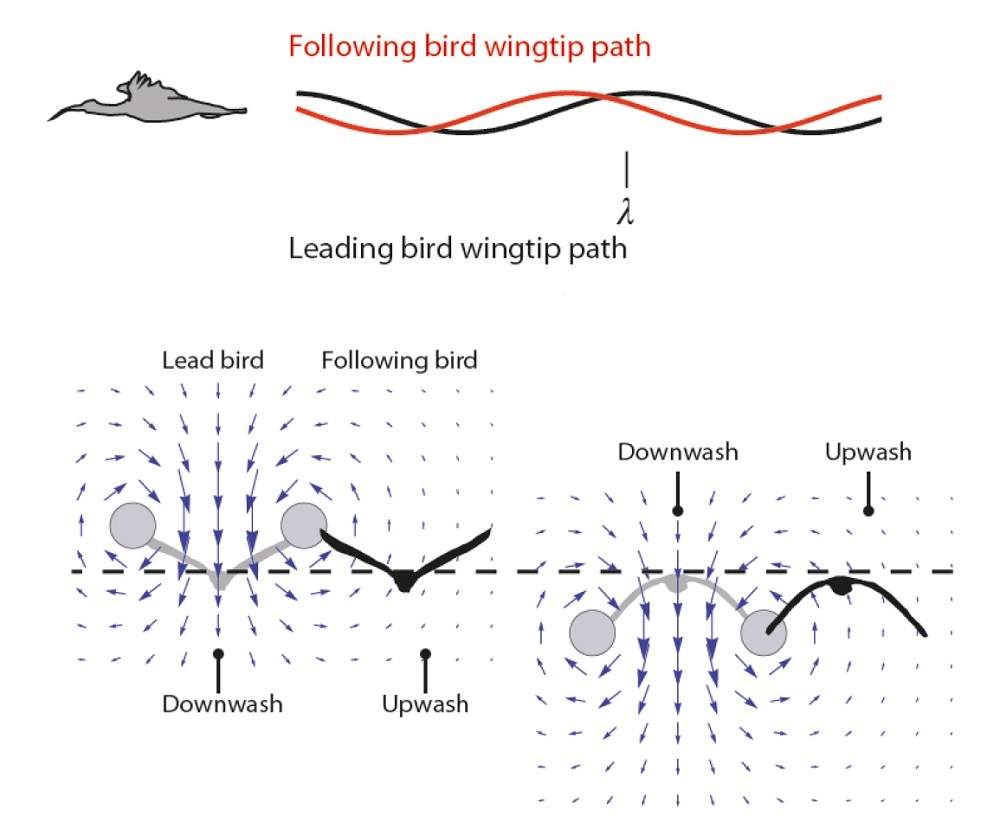 By positioning themselves accordingly, birds can make use of the ‘upwash’ generated by the bird flying in front of them © Reprinted by permission from Springer Nature: Nature, ‘Upwash exploitation and downwash avoidance by flap phasing in ibis formation flight’, Steven J. Portugal, Tatjana Y. Hubel, Johannes Fritz, Stefanie Heese, Daniela Trobe et al. 2014

Although it had long been thought that flying in V formation was more efficient, it was only in 2001 that researcher Henri Weimerskirch first showed, by fitting pelicans with heart-rate monitors, that birds flying in the back of a V formation had lower heart rates and hence energy consumption. It was assumed that the reason for this was that, apart from the first bird in the formation, all the birds fly in the upward-moving air produced by the wings of the bird ahead. However, how they did this was unknown until a study in 2014 used a flock of northern bald ibises that had been trained to follow a microlight.

The study found that birds are not only visually aware of where the others in the flock are, but are also able (somehow) to sense the direction of the airflow from the vortices shed from the edge of the wing ahead. By positioning themselves accordingly, and by adjusting their rate of flapping, they can make maximum use of the upward-moving air generated by the bird in front. During flight, birds move their wings at a slight angle that deflects the air downwards, so that air flows faster over the wing than underneath. Air pressure builds up beneath their wings and the pressure above reduces, and this difference in pressure produces lift. Flapping the wings creates additional forces: the upward force, thrust, and the downward power stroke.

During the downward stroke, the wing’s angle is even steeper and provides the majority of the thrust. This creates a very brief downward dive through the air, using the bird’s own weight to move forward, but it remains airborne as the wings continue to generate lift. The bird folds its wing inwards slightly during each upstroke, which reduces resistance.

With each flap a rotating vortex of air rolls off each wingtip and, by positioning itself in the upward part of this, the following bird gains free lift similar to how a glider can climb or maintain height indefinitely in rising air. The birds clearly need to avoid each other’s downwash, as that pushes them down and would result in them using extra energy. It is not yet known how they sense the upwash, but it may be that the wing feathers are themselves the sensors, or perhaps the birds also sense the total energy needs of flying and therefore accommodate themselves to the most comfortable rhythm.

In large birds like the ibis, each bird flies around a metre behind the bird in front, and a metre off to the side. They tend to swap positions and the front bird is rotated in a timely cyclical fashion so that flight fatigue is spread equally throughout the flock (much like cyclists in a peloton). Early studies had found that in a V formation of 25 members, each bird can achieve a reduction of induced drag and increase their range by 71% as a result. The 2014 study showed that birds’ heart rates decreased when they were flying together in a V formation, demonstrating that the formation saves energy.

Many air forces employ the V pattern during military flight missions and it was used as early as the First World War, where the ‘Vic’ formation improved fuel efficiency and allowed pilots to see each other’s aircraft. More recently, it has been used in swarms of drones to extend range.

Dental labs are increasingly adopting additive manufacturing to create dental implants. The technique can reproduce the complex three-dimensional geometries needed for such implants.