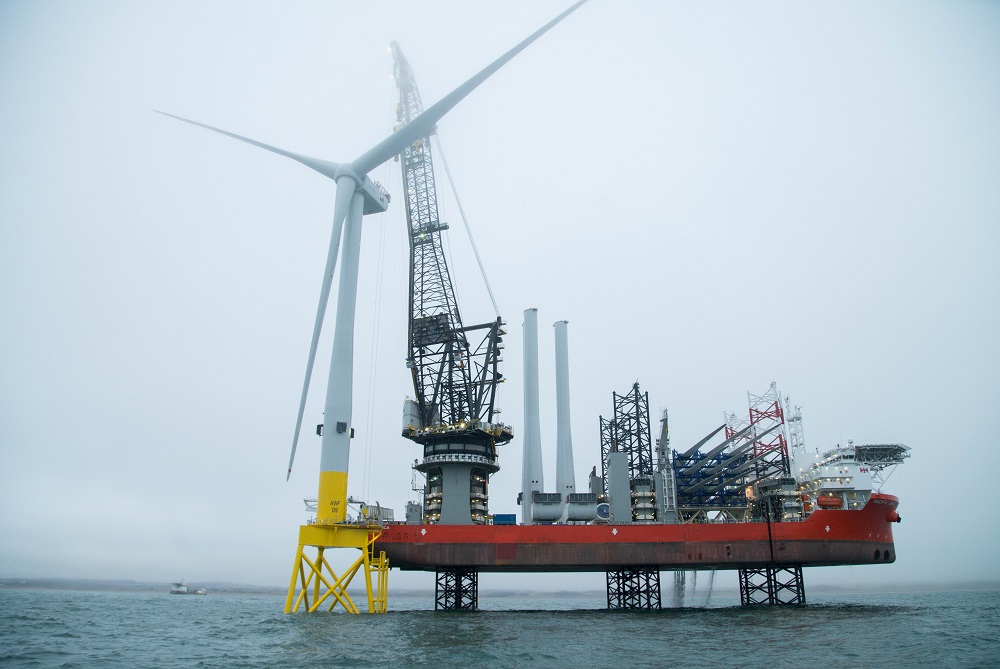 The Pacific Orca, pictured, is thought to be the world’s largest wind farm installation vessel. It transported the turbine from Sweden and installed it in Aberdeen Bay © TVP Film and Multimedia Ltd

In April, the world’s most powerful single wind turbine was installed in Scottish waters.

It is the first of 11 that Swedish power company Vattenfall has deployed at its new European Offshore Wind Deployment Centre (EOWDC) in Aberdeen Bay. The facility can now produce the equivalent of more than 70% of Aberdeen’s domestic electricity demand and annually displace 134,128 tonnes of CO2.

It is also one of two turbines that has extra internal power modes to generate more clean energy. The two turbines have each increased from 8.4 MW (megawatts) to 8.8 MW; it is the first time the offshore wind industry has used an 8.8 MW model commercially.

The new turbines are 191 metres high, with blades that are 80 metres long. The 164-metre rotor has a circumference larger than the London Eye. It is estimated that just one rotation of the blades can power the average UK home for a day.

The Royal Academy of Engineering is providing long-term support to 10 engineering global visionaries to develop areas of emerging technology. The Chairs in Emerging Technologies will focus on developing technologies that have the potential to bring significant economic and societal benefits to the UK.

Supported by the UK government’s National Productivity Investment Fund, the chairs will each receive £1.3 million of funding over the 10-year programme. The projects include the development of bioelectronic therapies for damaged central nervous systems, the rapid advancement of new battery technologies, and improved safety in robotics and artificial intelligence. The areas of emerging technology covered reflect the UK’s wider technology goals, based on government-identified priority areas of innovation for the UK, such as healthcare, robotics, clean energy, driverless vehicles, materials of the future, and space technologies.

Academy President Professor Dame Ann Dowling OM DBE FREng FRS said: “Emerging technologies offer enormous opportunities for the UK, both economically and socially, but often their potential is not widely recognised until it is championed by a visionary individual … The UK has a rich history of championing disruptive technologies – from the development of the steam engine to the invention of optical-fibre communications. Early-stage technologies offer enormous potential for the UK to continue this legacy and it’s vital that we invest in both the technology, and the people behind it, to remain competitive in the global marketplace.”

To find out more about the chairs and their research, please visit www.raeng.org.uk/emerging-technologies

Forensic engineering has revealed that the famous Oxford dodo, housed at the Oxford University Museum of Natural History, died after being shot in the back of the head. It was thought that the dodo, the world’s best-preserved specimen of the bird, had died of natural causes after a life in London as a curiosity.

The dodo’s remains were transferred to the Warwick Manufacturing Group (WMG) laboratory at the University of Warwick. The WMG team used forensic CT scanning to create a three-dimensional replica of the dodo’s skull and discovered mysterious particles. Further analysis showed that these were lead shot pellets, which hunters typically used to shoot wildfowl during the 17th century. The research showed that the dodo was shot in the back of the head and neck.

Professor Mark Williams, leader of the Product Evaluation Technologies and Metrology Research Group at WMG, said: “When we were first asked to scan the dodo, we were hoping to study its anatomy and shed some new light on how it existed. Although the results were initially shocking, it was exciting to be able to reveal such an important part of the story in the life of the world’s most famous extinct bird.”

The bird’s skull and foot have been held at the museum for more than 300 years. It is the only soft-tissue specimen of the species in the world and has been essential to discoveries about the bird. It also inspired Lewis Carroll when he wrote Alice’s Adventures in Wonderland.

The CT scan of the dodo’s skull shows the shot pellets in white © WMG, University of Warwick

The Royal Academy of Engineering has announced 20 projects that have been awarded funding under its Ingenious public engagement programme, including hands-on workshops, student radio shows, and science communication training.

The latest round of projects are set to take place across the UK and will provide new opportunities for members of the public to meet engineers and learn about the exciting, creative work that they undertake. The programme offers grants of up to £30,000 and this year, the panel was particularly interested in projects that focused on engaging underserved communities in the most deprived areas across the UK. 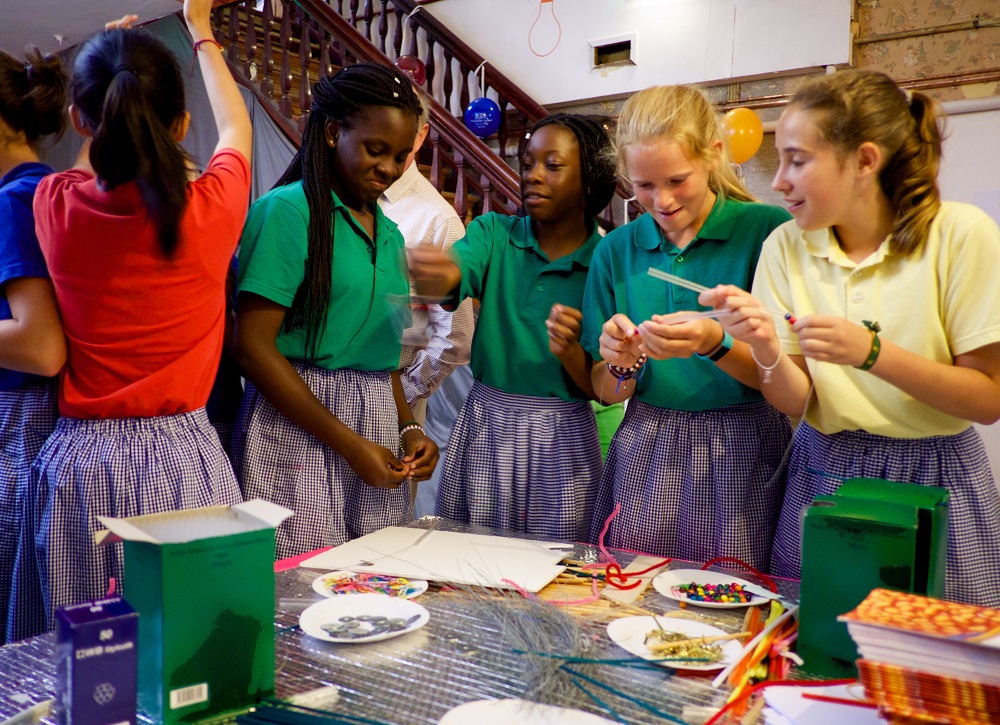 Participants at a 2017 Ingenious project in Thanet, Kent, that helped the local community to learn about the offshore wind farm near their homes © Discovery Planet

Panel chair Professor Mark Miodownik MBE FREng said: “The government has designated 2018 the Year of Engineering and our funded projects this year will contribute to this celebration of engineering … With an annual demand of around 124,000 engineering graduates every year, the profession desperately needs to engage with diverse communities to bring in new talent.”

Projects include TechTown Makerspace at Barnsley Library, an interactive making space equipped with 3D printers, robotics and coding areas, and Mars Safari in Kent, which will see 800 Girl Guides work with engineers and STEM ambassadors to build their own Mars Rovers and take them on a safari to explore the surface of Mars.

The Ingenious awards scheme is supported by the Department for Business, Energy and Industrial Strategy. It has funded more than 200 projects, providing opportunities for over 5,000 engineers to take part in public engagement activities that have reached more than 2.5 million members of the public.

To find out more about the projects, please visit www.raeng.org.uk/ingenious-2018

SPACE PARTNERSHIP AIMS TO REACH FAR SIDE OF THE MOON

Two UK space companies have partnered with a US organisation to develop innovations that will support operations on and around the Moon.

Surrey Satellite Technology Ltd (SSTL), Goonhilly Earth Station (GES) and Astrobotic announced the collaboration at the 34th Space Symposium in Colorado Springs. They aim to deploy in-space communication services to reach the far side of the Moon, which is thought to be a good place for radio transmitters because it is shielded from radio transmissions from Earth.

Lunar logistics company Astrobotic will begin to deliver regular uncrewed payload flights to the Moon in 2020. Many of the companies, governments, universities, and other non-profit organisations operating payloads on the company’s Peregrine Lander will need sophisticated communication relay services to reach previously prohibitive destinations on the Moon. SSTL plans to service those needs with data relay services, which GES will receive and transmit back to payload customers on Earth.

At the symposium, SSTL and GES also announced an agreement with the European Space Agency to develop a European lunar telecommunications and navigation infrastructure, including the delivery of payloads and nanosats to lunar orbit. The organisations are aiming to take a low-risk, phased approach to implementing a sustainable, long-term commercial service, which will support lunar scientific and economic development.

This week-long celebration returns for its third year to showcase UK technology in robotics and autonomous systems. Open days, lectures, competitions and events for all ages will take place across country.

This international awareness campaign aims to raise the profile and celebrate the achievements of women in engineering across the world, and encourage girls and women to pursue careers in the field. Employers, schools, colleges, engineers, and professional engineering institutions are encouraged to hold events, such as student careers visits at engineering workplaces, talks in schools by women engineers or organising networking events. The theme for 2018 is ‘raising the bar’.

The Institution of Mechanical Engineers (IMechE) asks participants to design and manufacture a miniature railway locomotive, which will be tested live at the competition weekend at Stapleford Miniature Railway in Leicestershire. The teams are made up of university students, as well as apprentices and graduates working in industry across the world.

This UK-based competition sees teams of university students design, build and power their own submarines at QinetiQ’s Ocean Basin ship model test tank in Gosport (‘Racing human-powered submarines’, Ingenia 72). On 7 July, the Institute of Marine Engineering, Science and Technology (IMarEST) is holding an open day and careers fair at Portsmouth Historic Dockyards where members of the public can meet the teams and see the submarines, as well as take part in STEM activities.

To discover more events taking place across the country as part of the Year of Engineering, please visit www.yearofengineering.gov.uk/inspired

The reasons for birds flying in a V formation follow from the applications of aeronautics, fluid dynamics and energy minimisation.