The award was founded by the MacRobert Trust and first presented in 1969. Every submission is reviewed by a panel of judges drawn from the Academy’s Fellowship and across engineering. The award honours the winning company with a gold medal and the team members with a prize of £50,000. Here, Ingenia showcases the three finalists for this year’s award in alphabetical order. The winner will be announced at the Academy Awards Dinner on 27 June 2018.

A QUICK AND EASY WAY TO DIAGNOSE DISEASE

Diagnosing diseases such as cancer usually involves a series of invasive tests and procedures. University of Cambridge spin-out Owlstone Medical has developed a non-invasive procedure that aims to quickly and painlessly identify a range of diseases through a simple breathalyser test.

The concept of using breath to diagnose disease is not a new one: Hippocrates (460 to 370 BC) first linked breath odour to underlying diseases and the analysis of volatile breath metabolites has been a research topic since the 1970s. Further research has investigated the presence of volatile organic compounds (VOCs) as biomarkers for a range of diseases, but there has been little agreement in identifying those linked to specific diseases, and breath-testing studies were inconsistent and not routinely used in clinical settings. 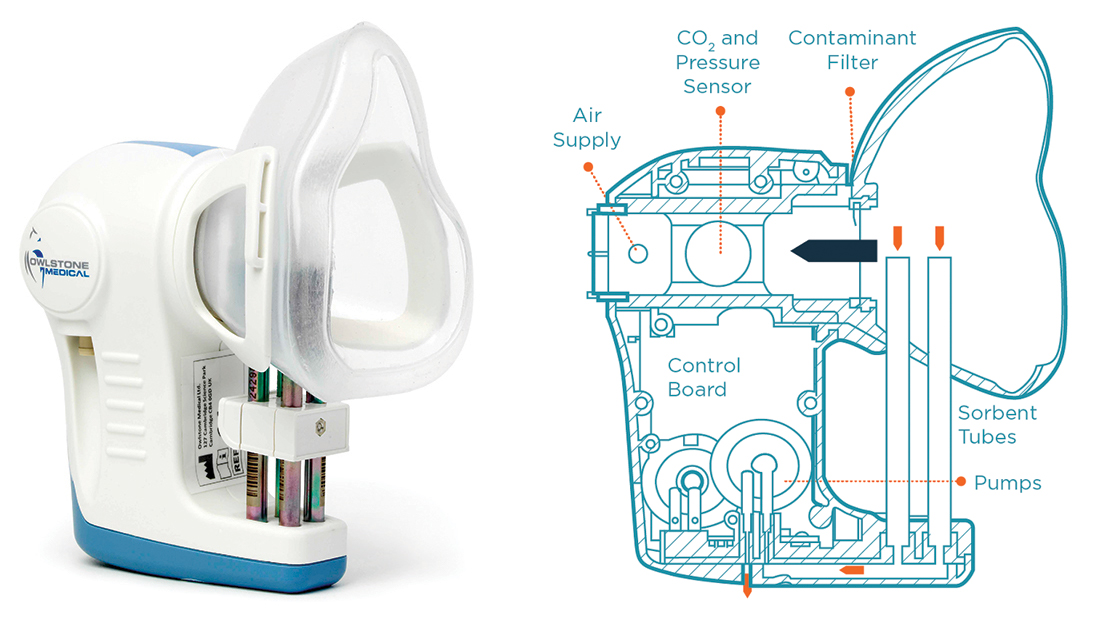 The ReCIVA Breath Sampler monitors patient breathing and automatically selects a fraction of expired breath to be captured. Breath is directed into four collection tubes, which are packed with sorbents that are optimised to collect volatile organic compounds in breath © Owlstone Medical

Owlstone Medical, founded by Billy Boyle and David Ruiz-Alonso, decided to focus on solving the problems around breath testing. The team discovered that, as well as small and inconsistent studies, the most significant issue was a lack of a standardised technology for collecting high-quality breath samples and analysing them reproducibly. In response to this, it has created the first technology capable of capturing and analysing breath samples in a robust and reproducible way, so that it can be used in large-scale clinical trials.

The ReCIVA Breath Sampler consists of: a handheld unit that attaches to a computer or tablet for monitoring and power; a disposable mask with a built-in filter to avoid cross-contamination; and a Breath Biopsy cartridge for collecting and pre-concentrating VOCs from breath. ReCIVA uses a portable air supply that minimises unwanted VOCs by ‘scrubbing’ ambient air. The Breath Biopsy platform can then analyse VOCs from precisely collected breath samples.

The platform includes a patented chemical sensor on a silicon chip, based on a technique called field asymmetric ion mobility spectrometry (FAIMS). Human breath contains thousands of chemicals, some of which are telltale markers of disease that the microchip chemical sensor can detect. The diagnostic ability of FAIMS has been demonstrated using a variety of sample types across a range of infectious and inflammatory diseases, as well as different types of cancer.

Owlstone Medical has initiated the world’s largest breath-based clinical trials using the Breath Biopsy platform, including the early detection of lung and colorectal cancer, and a collaboration with Cancer Research UK on early detection of multiple types of cancer. Early detection of cancer is critical to survival rates – for example, if detected early, over 93% of colon cancer patients survive, compared to late detections where less than 5% of patients survive five years. Currently, only 9% of patients with colon cancer are detected at the curable early stage, so increasing the rates of early diagnoses of cancer is a bigger opportunity than developing new drugs.

Non-invasive tests with reliable results would also help to encourage more patients to take part in screening programmes, which have low participation because the techniques used are often unpleasant.

Breath Biopsy can also help to enable precision medicine, which aims to identify the correct treatment for each patient based on condition-specific biomarkers. This could potentially save some of the $400 billion a year that is wasted on ineffective drugs.

In early 2017, Owlstone Medical launched its Breath Biopsy services, which are already attracting high-profile pharmaceutical clients. It has raised $38.55 million to support its 130-person team and develop its healthcare technology and is a partner in several clinical trials. The company is currently working with the NHS in the LuCID breath biomarker trial for early detection of lung cancer with up to 4,000 patients. More than 100 clinics and hospitals across the world use the Breath Biopsy platform.

The company has recently launched a new range of Breath Biopsy Kits and is hoping to announce new partnerships with biopharma by the end of the year.

Harwell space business Oxford Space Systems is pioneering a new generation of deployable antennas and structures that are lighter, can be stowed more efficiently, and are more cost-effective than current alternatives for the global satellite industry.

As the Earth’s population grows, the importance of monitoring humans’ impact on the planet is ever increasing. One of the most effective ways of monitoring shipping, land use, natural disasters and climate change is from satellites.

The antenna also uses unique and flight-proven materials, such as its proprietary flexible composite technology, which the company combines with conventional materials to create a new generation of lightweight deployable structures. Oxford Space Systems’ antenna structures are highly scalable, ranging from 2 metres to 15 metres in diameter.

The cost and stowage efficiency of Oxford Space Systems’ antenna technology means that it can enable the development of a new generation of lower cost, more capable satellites. Lower cost satellites, for example, will provide more readily available Earth observation services at lower prices. This data is used to identify and monitor pollution, track aircraft and ships, assist with fishing protection, measure sea level and temperature, and monitor weather.

One of its two successfully flown AstroTube™ booms is being used in the RemoveDebris mission (‘Mission to remove space debris’, Ingenia 72), which is testing a harpoon system to capture space junk. In the 60 years that humans have been exploring space, significant junk and pollution has accumulated in orbit. As such, space debris removal has increasingly become an active area of research and development in the UK.

Through the successful launch of the AstroTube boom, the company has also set a space industry record, with a material and product design, test and in-orbit demonstration in under 30 months.

Two US companies currently dominate the global market for deployable space antennas, but Oxford Space Systems is positioning itself as a more cost-effective and agile UK alternative. Its recent developments have opened the global market, increasing the quality and competitiveness of antenna-enabled services such as data relay, Earth observation and telecommunication.

Williams Advanced Engineering takes cutting-edge Formula One technology and applies it to real-world challenges. It has turned its expertise to developing an aerodynamic device that significantly reduces the energy consumed by supermarket refrigerators, partnering with innovative UK startup Aerofoil Energy.

Supermarkets and convenience stores account for an estimated 10% of the UK’s total energy use, with fridges using around 40% of that. Sainsbury’s alone uses nearly 1% of the UK’s total energy demand. Most supermarkets use open-fronted, vertical fridges for better merchandising and easier access for all customers. The current design launches a cold-air stream at the required temperature from the top of the fridge, intending to capture it at the bottom without losses. In practice, it is inefficient and a significant amount of the cold air escapes and warm air enters. This increases the temperature of the return air and makes the aisles cold. Because of this, large amounts of extra energy are needed to maintain a uniform temperature in an open-fronted fridge.

The aerofoil technology can deliver significant energy and carbon savings for supermarkets, as well as other benefits such as improving product temperature, meaning that less chilled food is wasted © Williams Advanced Engineering

An aerofoil is a structure with curved surfaces designed to give the most favourable ratio of lift to drag in flight, and is generally used as the basic form of the wings, fins, and tailplanes in most aircraft. A similar design is present in the front and rear wings of a Formula One car.

Paul McAndrew, CEO of Aerofoil Energy, realised that applying the principles of an aerofoil, extending forward from each shelf in a refrigeration unit, would act to contain and re-energise the downward flow of cool air in open refrigerators. Paul teamed up with Williams Advanced Engineering to develop the product and business concept. Together, they have designed and engineered aerofoil shelf-edge technology to control the direction of air flow and keep more cool air inside the fridge, as well as developing low-cost manufacturing techniques. Acting as the price label holder, the aerofoil maintains a cohesive and conforming cold-air curtain, ensuring that the cold air cascades down the fridge and prevents its escape into the aisle. Williams’ engineering team used computational fluid dynamics to optimise the aerofoil profile and have designed universal attachment systems to make retrofitting existing fridges quicker and easier, learning from experience during early store installations.

Aerofoil Energy’s innovation is simple, yet makes a significant energy saving. It could create substantial cost savings for those buying fridges and can be retrofitted to existing stock. It is environmentally friendly, and can help the retail sector meet energy-saving targets and reduce its carbon footprint. Each fridge fitted with the technology uses 15 to 25% less energy than those without. It offers potential annual reductions in UK carbon emissions equivalent to the monthly output of all households in Manchester.

It also has the added benefit of reducing heating costs in store, as less cold air escaping the fridge means that the aisles do not get cold. Studies in several leading UK grocery chains have shown that the average temperature in the chiller aisle is several degrees higher once the fridges are fitted with the aerofoil technology. Many customers do not like feeling cold when shopping in the refrigerated aisles, so supermarkets could increase the time that shoppers spend in their aisles.

The design provides the energy savings of closed-door fridges without the associated negatives. Closed-door fridges are more expensive to make, harder to recycle and have high maintenance costs, as well as being difficult to open for elderly or frail people, or those with a basket in one hand.

By March 2018, the product had been installed in over 1,000 stores, including Sainsbury’s, Co-op, Asda and Boots. Since January 2017, 130,000 units have been sold, and an additional 300,000 have been ordered and are in production. Sainsbury’s is installing the aerofoils across its 1,400 stores as part of a retrofit programme and all its new fridges will be fitted with the technology. This will reduce the chain’s refrigeration costs by 15%, a potential annual saving of almost £10 million.