Self-driving cars have been a science-fiction staple for decades, but a wide range of onboard sensors and sophisticated data-processing tools are now supporting trials on public roads around the world.

Few technological goals are as dependent on innovation and engineering as attempts to create fully autonomous vehicles. The challenge of enabling vehicles to interpret endlessly changing environments has remained frustratingly beyond our abilities – until now. Thanks to recent breakthroughs in fields such as Lidar – which uses a pulsed laser to measure distance to a target – the prospect of what’s known as level 5 autonomy finally seems achievable in the next few years.

Vehicular automation is graded on a scale from 0 to 5, where 0 is a process managed entirely by a driver. Level 1 involves standalone assistance such as radar-guided cruise control (capable of preventing frontal collisions), while level 2 automates individual processes as long as the driver is ready to take control at any point – such as computer-controlled braking on muddy descents. Level 3 automation lets a vehicle control all aspects of its movement in limited environments such as motorways, whereas a level 4 vehicle exercises self-governance throughout a journey, including parking and junctions. However, complex tasks including exiting a ferry onto a slipway may require human intervention. 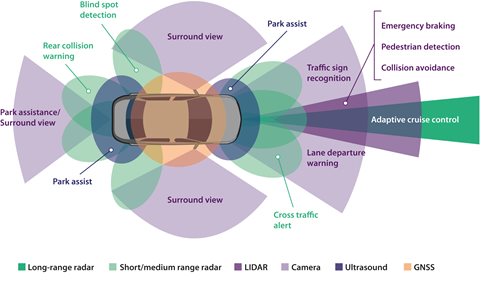 The ultimate aim is to reach level 5: complete automation. At this point, human interfaces such as pedals and steering wheels are removed altogether, and every occupant becomes a passenger. To analyse whether surface or overhead obstacles are safely navigable, a level 5 autonomous vehicle requires multiple input streams to make sense of its surroundings:

In isolation, none of these systems provide sufficient environmental data for a vehicle to proceed safely. However, once they are fed into a multi-domain controller unit (and overlaid on real-time mapping and GPS positioning data), the vehicle should have enough input to set and follow its own route. Tomorrow’s artificial intelligence (AI) platforms will combine deep learning with a 360-degree real-time environmental view, to anticipate and pre-emptively resolve threats posed by static and moving objects.

The advantages of level 5 autonomous vehicles include universal mobility for people currently unable to drive, and more time for ‘drivers’ to pursue other activities. Estimates suggest fuel economy could be boosted by up to 30%, although the biggest benefits relate to road safety. Over 27,000 people are killed or seriously injured on British roads each year, and 90% of these accidents are attributable to human error. Removing ourselves from the driving experience represents the best way to save millions of lives around the world.