In June, Brian Gitta, the inventor of a non-invasive malaria test, was announced as the winner of the Africa Prize for Engineering Innovation at an event in Nairobi, Kenya. 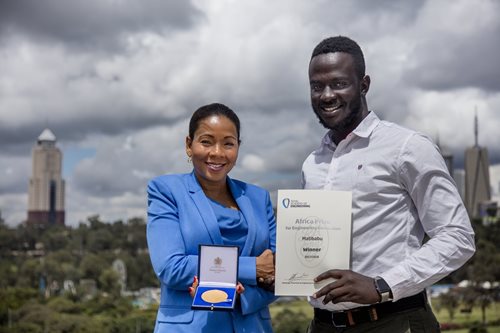 Brian Gitta with Africa Prize judge Rebecca Enonchong, Founder and CEO of AppsTech, who described his invention as “simply a gamechanger”

His innovation, Matibabu, tests for malaria quickly, accurately and without drawing blood. It is a low-cost, reusable device that clips onto a patient’s finger and requires no expertise to operate. A red beam of light is shone through the user’s finger, and detects changes in the shape, colour and concentration of red blood cells, all of which are affected by malaria. Within one minute, the results are available on a mobile phone that is linked to the device.

In Nairobi, the four finalists, from Ghana, Nigeria, Uganda and Zimbabwe, pitched their innovations to a panel of judges and a live audience. The finalists were selected from a pool of 16 shortlisted candidates, who all received tailored business mentorship.

Brian won the first prize of £25,000, while three runners-up won £10,000 each. The runners-up were chemical engineer Collins Saguru, who developed AltMet, a process that recovers the precious metals found in the autocatalytic converters of all petrol and diesel vehicles. Electronics engineer Ifediora Ugochukwu developed iMeter, which helps prevent tampering with electricity meters and gives consumers more transparency and control over their energy use. Mechanical engineer Michael Asante-Afrifa created Science Set, a textbook-sized science lab that contains specially developed materials needed for science activities and experiments.

Run by the Royal Academy of Engineering, the Africa Prize provides a package of support to engineering innovators in sub-Saharan Africa, which includes funding, comprehensive business training, bespoke mentoring, and access to the Academy’s network of high-profile engineering experts and their network.

In June, the Royal Academy of Engineering hosted its annual Awards Dinner to celebrate and recognise engineers who have made a remarkable contribution to the industry.

Owlstone Medical was announced as the winner of the MacRobert Award 2018, the UK’s longest running and most prestigious prize for innovation in UK engineering. The company received a gold medal and the team members shared a cash prize of £50,000. Owlstone Medical has developed a non-invasive procedure that aims to quickly and painlessly identify a range of diseases through a simple breathalyser test. Its Breath Biopsy platform has the potential to save hundreds of thousands of lives and $1.5 billion in healthcare costs globally (‘MacRobert Award 2018’, Ingenia 75).

An integral part of the Great North Rail Project, the Ordsall Chord incorporates the first asymmetric network arch bridge in the world. The Chord uses only 540 metres of entirely new track to connect Manchester’s existing railway lines via a brand-new viaduct spanning the River Irwell

Mishal Husain, news anchor and broadcaster, hosted the ceremony at which several other awards were presented. The Major Project Award was presented to the team behind the Ordsall Chord, a new railway line connecting Manchester’s Piccadilly and Victoria stations for the first time, in recognition of the collaboration, skill and engineering flair necessary to deliver such a complex, multidisciplinary feat of railway engineering.

Five young engineers received the RAEng Engineers Trust Young Engineers of the Year awards, established with the generous support of The Worshipful Company of Engineers: Khouloud El Hakim, Project Manager at Bechtel Ltd, who also won the Sir George Macfarlane Medal for demonstrating outstanding excellence in the early stage of her career for her work on Crossrail; Simon Bowcock, Lead Materials and Corrosion Engineer at BP; Dr Christopher Donaghy-Spargo, Assistant Professor of Electrical Engineering at Durham University; Dr Robert Hoye, Junior Research Fellow at the University of Cambridge; and Chetan Kotur, Executive Assistant to the CEO at Polestar.

The winners of the Silver Medals were also announced. 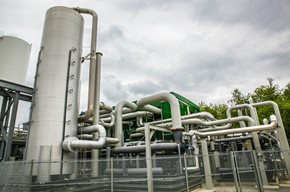 The plant was developed in partnership with recycling and renewable energy company, Viridor, and partly made possible by over £8 million in funding from the UK government © Highview Power

The world’s first grid-scale liquid air energy storage (LAES) plant has opened in Pilsworth, Bury. A pioneering way to store power, the plant acts as a giant rechargeable battery to absorb excess energy, which it releases when needed.

LAES uses excess power to cool air to -196°C, which transforms it into a liquid that is stored at low pressure. The liquid air is then pumped to high pressure and heated to create a gas that turns a turbine to create electricity without combustion when power is required. Although batteries can have higher efficiencies, LAES technology enables energy to be stored for long periods, is cheaper than batteries at large scale and can provide power for longer than lithium-ion batteries. The technology does not use hazardous materials, can be recycled easily and has a lifespan of over 30 years.

The Pilsworth plant, operated by Highview Power, has a capacity of five megawatts and can store 15 megawatt hours (MWh) of electricity, which is enough to power about 5,000 homes for around three hours. A commercial-scale plant would have a capacity of 50 megawatts, but the LAES plant has the potential to be scaled up to hundreds of megawatts.

MISSION TO ‘TOUCH THE SUN’ LAUNCHED 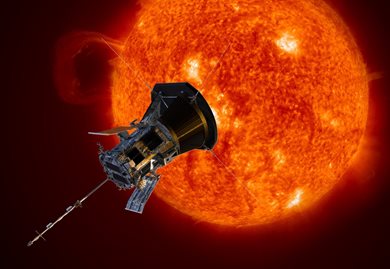 On 12 August, NASA launched its first ever mission to ‘touch the Sun’ with the lift-off of the Parker Solar Probe, which aims to provide unprecedented close-up observations of the star.

The spacecraft is named after Eugene Parker, an astrophysicist who first described solar wind in 1958. It will travel directly into the Sun’s atmosphere, using Venus’s gravity to bring its orbit closer to the Sun over seven years. Set to become the fastest-moving manmade object in history, the probe will eventually be seven times closer to the Sun than any spacecraft has ever been, at 3.8 million miles away (Earth is 93 million miles away from the Sun). The spacecraft and instruments are protected from the Sun’s heat by a 4.5-inch-thick carbon-composite shield, which can withstand temperatures of nearly 2,500 degrees Fahrenheit.

When the spacecraft reaches the outermost part of the Sun’s atmosphere, known as the corona, it will take in situ measurements and images. This will help scientists understand the corona, and expand knowledge of the origin and development of solar wind. It will also enable scientists to forecast changes in Earth’s space environment that affect life and technology on Earth.

20 to 23 September
New Scientist Live
New Scientist Live returns to Excel in London for its third year. The science festival will have zones based around the cosmos, Earth, humans, technology and engineering, and will feature interactive demonstrations, speakers and experiences.

Engineering highlights include a virtual reality rollercoaster and a pop-up planetarium. Professor Mark Miodownik MBE FREng, materials scientist, will be giving a talk on Liquids: the delightful and dangerous substances, and neuroengineer Professor John Donoghue will discuss Building bionic people.

In the engineering section, the Royal Academy of Engineering stand will showcase the This is Engineering campaign (‘Digital campaign aims to tackle skills shortage’, Ingenia 74), with protagonists from some of the films demonstrating how their passions have turned into engineering careers.

Ingenia readers can get a 10% discount on tickets by using the code RAENG10 at live.newscientist.com

11 October
The Great Space Challenge
Children under 12 from across the UK are invited to build a module, such as a lab or a sleeping pod for an ‘International Space Centre’, which will be brought together to create a huge space station at the Great Space Challenge festival in Harwell, Oxfordshire, during a day full of space-themed activities.
www.greatspacechallenge.com

18 to 28 October
Manchester Science Festival
This year, Manchester Science Festival celebrates engineering with a number of hands-on activities, ranging from magnet experiments and megastructure building to bioengineering and drones. Visitors can see Stephenson’s Rocket, learn about electricity and energy expert James Joule, and tour the University of Manchester’s High Voltage Test Lab. The festival takes place across venues in Manchester, with its headline exhibition, Electricity: the spark of life, held at the Museum of Science and Industry.
www.manchestersciencefestival.com 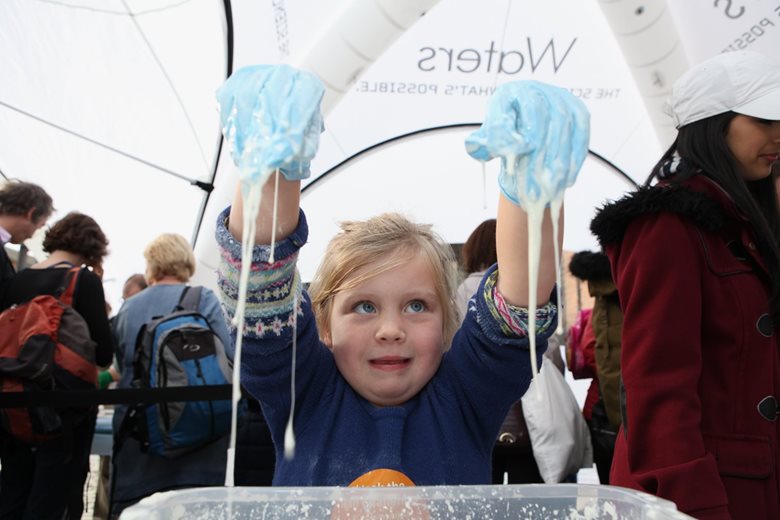 27 October to 4 November
Future Engineers
Taking place at the National Railway Museum in York, Future Engineers is a week-long event that invites visitors to experiment, problem-solve and create through hands-on activities and live performances from scientists and engineers.
www.railwaymuseum.org.uk/whats-on/future-engineers

5 to 9 November 2018
Tomorrow’s Engineers week
This week aims to show young people how exciting a career in engineering can be. Tomorrow’s Engineers highlights the stories of several engineers and how their work is making a difference. It also provides a number of activities for schools, colleges and organisations.
www.tomorrowsengineers.org.uk

2018
Engineer your future
This interactive exhibition at the Science Museum is for teens thinking about their futures. Several challenges, games and films help people understand what engineers do and whether it might be the right career choice for them.
www.sciencemuseum.org.uk/see-and-do/engineer-your-future

2018
Invisible superheroes exhibition
Invisible Superheroes is a year-long exhibition held by the Institution of Civil Engineers in London to commemorate the organisation’s 200th anniversary and celebrate the role that civil engineers play in transforming lives and safeguarding our future. The exhibition focuses on the unsung heroes behind some of the world’s most amazing engineering projects, using state-of-the-art technology to bring the best examples of civil engineering to life.
www.ice.org.uk/events/exhibitions/ice-invisible-superheroes-exhibition