The European satellite BepiColombo has been successfully sent on a seven-year voyage to Mercury, the smallest and least explored planet of the inner Solar System.

On 20 October, the 6.4-metre-high satellite, which weighs four tonnes, blasted off atop the European Ariane 5 rocket from Europe’s spaceport in Kourou, French Guiana. 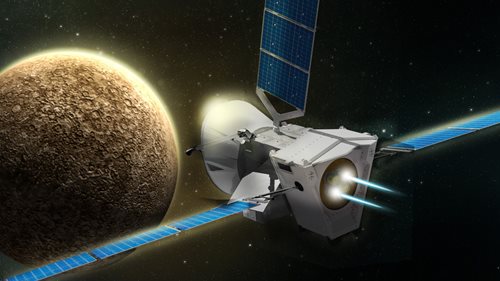 An artist’s representation of the BepiColombo satellite © Airbus

The satellite, which has been partially built in the UK by Airbus, will provide data about Mercury’s internal structure, the composition of its surface and the evolution of its geological features, including craters around the planet’s north pole that are known to contain ice. The mission will also study Mercury’s magnetic field and measure how it interacts with the solar wind – a stream of highly charged particles coming from the Sun.

The spacecraft, only the third in history to visit Mercury, has been developed jointly by the European Space Agency (ESA) and the Japan Aerospace Exploration Agency (JAXA). It consists of two orbiters that will circle Mercury at different altitudes and provide complementary data through their combined 16 instruments.

The Mercury Planetary Orbiter (MPO), developed by ESA, carries 11 instruments, including the British-built Mercury Imaging X-ray Spectrometer – a novel optical instrument that will analyse small features on the planet’s surface and determine their composition.

Since Mercury orbits only 58 million kilometres away from the Sun, the orbiters will be exposed to extremely high temperatures. Airbus engineers have therefore designed and built a special shield for the MPO that covers the side of the spacecraft carrying the instruments. The shield consists of 49 layers of ceramics and aluminium that protect against the heat.

The second orbiter, the Mercury Magnetospheric Orbiter, has been developed by JAXA. It will collect data about the planet’s magnetosphere and its interaction with the solar wind.

The two orbiters travel to Mercury stacked on top of the Mercury Transfer Module, which propels the entire spacecraft on its journey using an innovative electric propulsion system that uses a stream of electrons to generate thrust.

A consortium, which includes Arup as lead structural engineer, has created the world’s largest, single-span, 3D-printed bridge from layers of printed steel. 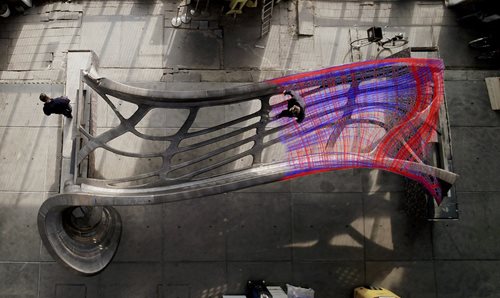 In 2019, the 12-metre bridge will be installed over the Oudezijds Achterburgwal canal in Amsterdam. It took about a year for robotic manufacturing technology startup MX3D to print the bridge at its workshop in the city. Six-axis robots, which have greater flexibility, built the bridge with programmed robotic arms controlling large-scale welding machines.

As well as being the first bridge to be 3D printed in steel, data scientists have designed it as a ‘living laboratory’. The bridge is covered in a network of sensors that generate data about everyone that crosses it, as well as about the bridge itself. The data will be fed back to a ‘digital twin’ of the bridge developed by the Alan Turing Institute and Arup, which will help to analyse the data on bridge traffic, structural integrity and the surrounding environment. The data will provide insights into how the new material and construction process behaves, and will contribute to the future of safe, data-driven engineering.

A team at Imperial College London has been collaborating with colleagues in several academic fields to develop a long-term structural health monitoring network to ensure that the bridge remains safe throughout its lifetime.

Liam Butler, from the University of Cambridge’s Centre for Smart Infrastructure and Construction, elaborated: “Thousands of people are going to cross this bridge an hour, so the City of Amsterdam is interested at looking at things like foot traffic, CO2 emissions, noise and decibel levels, and more.”

Mark Girolami, the Alan Turing Institute’s Programme Director for Data-Centric Engineering, added: “3D printing is poised to become a major player in engineering, and we need to develop novel data-centric approaches for testing and monitoring to realise its full potential. When we couple 3D printing with digital twin technology, we can then accelerate the infrastructure design process, ensuring that we design optimal and efficient structures with respect to environmental impact, architectural freedom and manufacturing costs.”

A 3D-printed concrete bridge previously opened in the Netherlands in 2017.

In September, the RemoveDEBRIS mission successfully used its net to capture a deployed target that simulated a piece of debris in orbit. 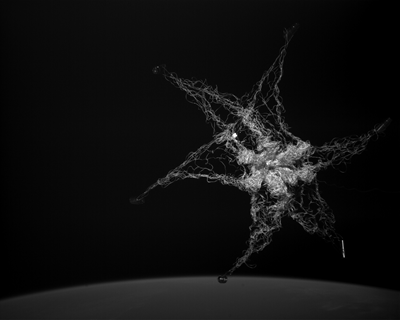 Launched in early 2018, the RemoveDEBRIS mission is the first experiment to test technologies to remove space debris in low Earth orbit (‘Mission to remove space debris’, Ingenia 72). It is estimated that there are more than 7,600 tonnes of space junk in and around Earth’s orbit, risking collisions with satellites.

Professor Guglielmo Aglietti FREng, Director of the Surrey Space Centre, said: “We are absolutely delighted with the outcome of the net technology. While it might sound like a simple idea, the complexity of using a net in space to capture a piece of debris took many years of planning, engineering and coordination between the Surrey Space Centre, Airbus and our partners – but there is more work to be done. These are very exciting times for us all.”

In the coming months, the RemoveDEBRIS spacecraft will test more debris removal technologies, including a vision-based navigation system that uses cameras to analyse and observe potential debris, and harpoon capture technology. A drag-sail will then bring the debris back into the Earth’s atmosphere where it will be destroyed, in compliance with international debris regulations. 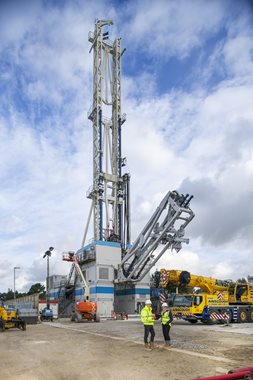 In November, work started on building the UK’s first deep geothermal electricity plant in Cornwall. It aims to demonstrate the potential of geothermal energy for electricity and renewable heat in the UK.

Two deep geothermal wells will be drilled at the site, the deepest of which will reach 4.5 kilometres, the deepest hole ever drilled in the UK.

A pump will extract water from the well at a temperature of approximately 190°C, before being fed through a heat exchanger at the surface. It will then be re-injected into the ground to pick up more heat from the rocks in a continuous cycle. The heat will be converted into electricity and supplied to the National Grid. The demonstration plant will deliver up to 3 megawatts of electricity, which is thought to be enough energy to power around 3,000 homes.

Geothermal energy is low carbon, renewable and a continuous energy source. The UK’s geothermal resources have the potential to supply up to 20% of the UK’s electricity and heat energy in a reliable and sustainable way.

The project is being funded by the European Regional Development Fund, Cornwall Council and private investors, and delivery partners include GeoScience Ltd, The British Geological Survey and the University of Plymouth Sustainable Earth Institute. 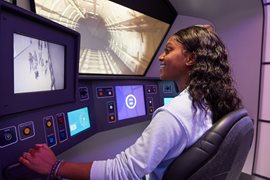 13 to 16 March 2019
The Big Bang
The annual Big Bang fair in Birmingham is the UK’s largest celebration of STEM for young people. Visitors to the fair can get hands-on at a range of workshops and exhibits, or take part in STEM shows.
www.thebigbangfair.co.uk

The football pitch in three pieces

Tottenham Hotspur’s redeveloped football stadium in North London is the first in the world to feature a dividing pitch that slides under the south stand to reveal an artificial NFL playing field.

How I got here - Rahul Mandal

The evolution of Earth observation

Satellite images have been used for many years to collect information about Earth’s natural and built environments. Developments in technology are changing how this information is accessed and being used.