A team of engineers has developed a range of instruments that is changing the way people make music. ROLI combines digital technologies and pressure-sensitive silicone so that users can generate sounds with the lightest touch.

In 2009, designer, musician and inventor Roland Lamb was studying at the Royal College of Art when he decided to create a digital musical instrument that did not have the limitations of a keyboard, for example only producing one note at a time, but still had an acoustic feel. 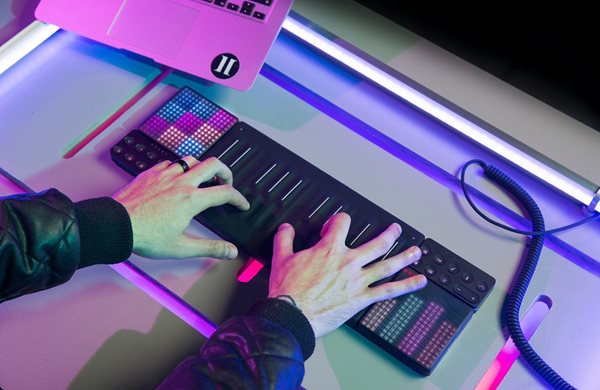 Using his Seaboard design, musicians can play between the ‘keys’ of a keyboard to produce a wide range of sounds, which are all entirely digital. It has a tactile and pliable silicone coating that allows people to play it easily in sweeping and sliding strokes. Different pressures affect the sounds, and different parts of the keys can be pressed to change notes. For example, it can simulate the effect of wiggling a figure on a guitar string to create different notes.

The design consists of a top layer of silicone (similar in consistency to a wetsuit or stress ball) that is stacked on top of a sensor board. The silicone diffuses pressure from the player’s touch to activate sensors beneath the silicon that transform touch into sound. Each sensor corresponds to different notes or tones and sends messages in MIDI (Musical Instrument Digital Interface – the computer language that allows computers and digital instruments to communicate) to pass the sounds through the speakers in a matter of milliseconds.

Lamb worked with a team of electronic, software, design, sound, and quality assurance engineers to perfect the range of products that make up his ROLI line. It has various instruments, including the piano-like Seaboard, as well as ‘Blocks’ that can be used in a similar way to drums. The software works with desktops and smartphones via Bluetooth.

While sensors and high-performance silicone are used in many products, combining both and integrating them with MIDI software was a challenge. The team spent four years on research and development between the original sketch and launching the first commercial product, creating prototypes and experimenting with suppliers and components.

As well as engineering a suitable surface, one of the biggest challenges was changing people’s perceptions about what a musical instrument is – music has been written for certain instruments for hundreds of years. Getting the instruments in the public eye was essential. World famous musician and record producer Pharrell Williams (who has invested in ROLI and is also its Chief Creative Officer), Stevie Wonder and Hans Zimmer are among its users, and Ryan Gosling’s character in La La Land plays a Seaboard. Several schools have integrated the instruments into their curriculums, with primary and secondary schools, and universities using them. The company is keen to teach children young, before they have preconceptions of what an instrument is. Tens of thousands of people now own and play ROLI instruments, and the number is growing every year. For more information, visit roli.com

A first-of-its-kind engineering project added a five-storey basement to Claridge’s while the hotel was still operational. Traditional methods might have resulted in shutting down and demolishing parts of the hotel.

HOW DOES THAT WORK - Speech recognition

Speech recognition software is a common feature in several devices, including smartphones, computers and virtual assistants.

The football pitch in three pieces

Tottenham Hotspur’s redeveloped football stadium in North London is the first in the world to feature a dividing pitch that slides under the south stand to reveal an artificial NFL playing field.