The four engineers responsible for creating GPS won the 2019 Queen Elizabeth Prize for Engineering (QEPrize). The four winners, Dr Bradford Parkinson, Professor James Spilker, Hugo Fruehauf and Richard Schwartz, were awarded with the prize for their pioneering work that has given free, immediate access to position and timing information to over four billion people around the world. The announcement was made by Lord Browne of Madingley FREng FRS at the Royal Academy of Engineering on 12 February, in the presence of HRH The Princess Royal. 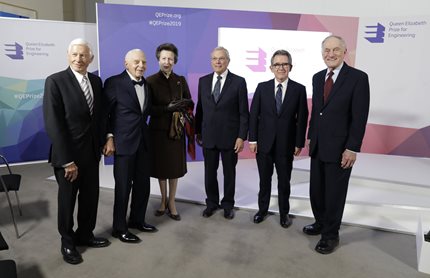 The QEPrize is an international £1 million prize that celebrates the engineer or engineers responsible for a groundbreaking innovation that has been of global benefit to humanity. Its objective is to raise the public profile of engineering and to inspire young people to become engineers.

GPS’s applications range from navigation and disaster relief to climate monitoring systems, banking, transport, agriculture, and industry. It uses a constellation of at least 24 orbiting satellites, ground stations and receiving devices. Each satellite broadcasts a radio signal containing its location and the time from an extremely accurate onboard atomic clock. GPS receivers need signals from at least four satellites to determine their position; they measure the time delay in each signal to calculate the distance to each satellite, then use that information to pinpoint the receiver’s location on earth.

As the chief architect, Dr Parkinson is often called the ‘father of GPS’ after he successfully built upon several separate systems to create the current GPS design. His insistence that GPS should be intuitive and inexpensive made navigation accessible to billions.

Dr Parkinson recruited Professor Spilker to design the signal that the satellites broadcast, which is resistant to jamming, is precise and allows multiple satellites to broadcast on the same frequency without interference. Professor Spilker’s team also developed and built the first receiver to process GPS satellite signals.

GPS receivers rely on accurate timing information, broadcast from satellites, to determine their position on earth. Hugo Fruehauf, then the chief engineer at Rockwell Industries, led the development of a miniaturised, radiation-hardened atomic clock that became the GPS ‘clock of choice’. Its accuracy is the backbone of communications systems, power grids, financial and trade networks, and other critical infrastructure.

For GPS to be affordable, each satellite had to be longlasting. Richard Schwartz, the programme manager at Rockwell during the development of the satellites, was tasked with ensuring a three-year lifespan. His design was resistant to intense radiation and lasted over nine years.

The winners were decided by an international panel of judges, chaired by Professor Sir Christopher Snowden FREng FRS. As well as the £1 million prize, the winners will each receive a trophy at a ceremony later this year. The 2019 trophy was designed by 16-year-old Jack Jiang from Hong Kong, winner of the international Create the Trophy competition.

More information about the prize and winners can be found at www.qeprize.org 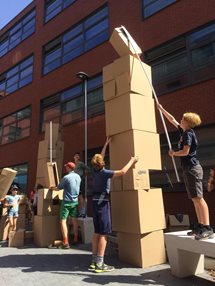 Young people take part in a design and engineering camp run by FixCamp, an Ingenious awardee in 2018 © FixEd 2019

Through its public engagement grant scheme, Ingenious, the Royal Academy of Engineering is funding 27 new projects that will allow engineers to engage the public in innovative ways.

The projects will provide engineers with the opportunity to engage public audiences with creative engineering content and also build their engagement skills. They will reach diverse and underrepresented audiences across the UK and provide opportunities for members of the public to meet professional engineers and learn about the exciting, creative work that they do.

The 2019 projects include the Ingenious Circus, a project run by the University of Glasgow that brings engineers and circus performers together to develop a workshop for schools. Engineering the human body will show children in Manchester the role that engineering plays in healthcare through a series of workshops and challenges based on tissue engineering and personalised medicine. In Wales, engineers will explore the engineering heritage of the Pontcysyllte Aqueduct and canal, and connect the history to current engineering projects.

Ingenious is supported by the Department for Business, Energy and Industrial Strategy. A full list of projects funded by the scheme can be found at  www.raeng.org.uk/ingenious

Nine young women innovators have been awarded with £50,000 each as part of Innovate UK’s Women in Innovation Awards.

Daniela Paredes, who has appeared in the This is Engineering campaign, received a Women in Innovation Award for Gravity Sketch’s virtual reality design tool

Announced on International Women’s Day on 8 March, the winners were recognised for their pioneering innovations that are tackling some of society’s biggest challenges, as set out in the government’s industrial strategy.

The winners include Royal Academy of Engineering Enterprise Fellow Sheana Yu, Founder and CEO of Aergo, who is developing a device to be built into wheelchairs that monitors movement and automatically inflates and deflates air cells to ensure better posture and comfort. Another recipient is Daniela Paredes, who featured in season one of the This is Engineering campaign. Daniela is Co-Founder and Director of Gravity Sketch, which has developed a virtual reality design tool.

As well as the funding, all the winners will receive a year-long package of bespoke support, coaching and mentoring, and a commemorative plaque that will be installed where each woman’s innovation journey began.

Innovate UK Executive Chair Dr Ian Campbell said: “Innovate UK’s Women in Innovation Awards address a key barrier for diversity in innovation – a lack of female role models. By recognising their achievement with purple plaques, we are making sure that our nine newly crowned winners inspire the next generation of female innovators.

“Whether it’s inspiring young students showing a passion for STEM, someone with the spark of an idea, or an innovative business ready to be taken to the next level, the Women in Innovation 2019 campaign aims to drive long-term, far-reaching positive change.”

This is Engineering Season 3

This is Engineering has launched a new season of films that feature four young engineers working in a range of industries, from robotic farming to sustainable cosmetics. 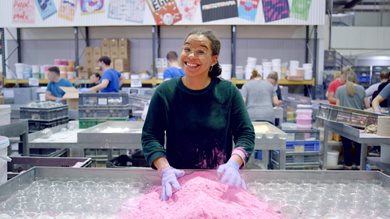 The four new engineers include Halvard, a robotics engineer who has followed his love of nature into creating robots to revolutionise farming. Jahangir works for the BBC as a broadcast engineer and Olivia, who was always interested in sustainability and is a chemical engineer at Lush (see ‘How I got here’, Ingenia 75). The final engineer is Sophie, who always wanted to become an astronaut – she realised that engineering was the route to space, and now works at BAE Systems on the high-speed planes of the future.

This is Engineering was created in response to significant demand for engineering talent in the
UK and narrow public perceptions of engineering and engineers. The campaign launched in January last year and the first two series of films have been viewed more than 30 million times by teenagers on social media. 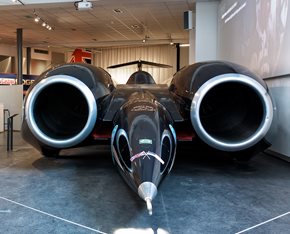 The Thrust SSC is currently on display at Coventry Transport Museum

The British-designed Thrust supersonic car (SSC) has been awarded the Institution of Mechanical Engineers’ (IMechE) Engineering Heritage Award. It was the first land vehicle to break the speed of sound.

In 1997, the 54-foot-long Thrust SSC broke the sound barrier at the Black Rock Desert in Nevada. The car set the record by burning 18 litres of fuel a second to reach a speed of 764 miles per hour. Twin Rolls-Royce Spey turbofan engines powered the vehicle with 50,000 pounds of thrust.

John Wood, chair of the IMechE Engineering Heritage Award, said: “When it comes to individual artefacts, it’s not an easy decision to make and our aim is always to ensure that only the very best and unique are honoured by the award. The vehicle and the team behind it were working in completely unchartered territory and what they achieved was quite extraordinary. We are very pleased to honour this vehicle with this award and hope it inspires the young engineers of the future in particular to head to the museum to see it in all its glory.”

Established in 1984, the awards aim to promote artefacts, sites or landmarks of significant engineering importance from the past and present. This is the 125th Engineering Heritage Award to be presented, and previous awards include Alan Turing’s Bombe at Bletchley Park, the E-Type Jaguar and Concorde.

Students have been invited to put forward an innovation that addresses the global challenges presented by a growing population and new technological changes.

As part of the Global Grand Challenges Summit 2019 (GGCS), teams from UK, Chinese and US universities will demonstrate an innovation that is viable and will have sustained impact. Five teams from each country will be chosen to pitch their innovations on the first day of a three-day Collaboration Lab, which precedes the summit. They will present a three- to five-minute pitch of their proposals to a selection of senior judges and all Collaboration Lab event participants. The winning team will receive a small cash prize.

The summit is a collaboration between the UK, US and Chinese academies of engineering, which will take place in London, hosted by the Academy, between 16 and 18 September.

The event will bring together world leaders with the next generation of engineers to build collaborative solutions for our future world. The summit is based around the theme of Engineering in an unpredictable world, with subthemes of ‘Can we sustain 10 billion people?’ and ‘Will AI and other transformational technologies change humanity for the better?’.

Dr John Lazar CBE FREng, chair of the steering committee for the summit, said: “Our overriding ambition is to generate lively discussion and rigorous thought on the huge challenges facing humankind over the next three decades. In particular, we want to extend horizons for younger engineers, so they can explore how to tackle the grand challenges and UN Sustainable Development Goals, working in an open and cross-disciplinary fashion.”

For more information about the competition and summit, visit www.raeng.org.uk

On 23 May, the Royal Academy of Engineering will host a talk by Tristram Carfrae FREng, Deputy Chairman of Arup, in which he will discuss the modern engineering techniques being used to complete Antoni Gaudí’s famous La Sagrada Família church in Barcelona. 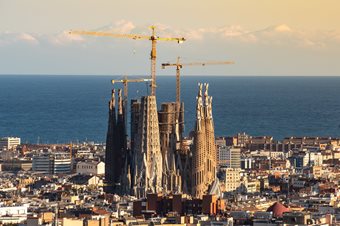 The construction of La Sagrada Família began in 1882. However, one year later, the original architect resigned and Gaudí was commissioned to redesign the Basilica. He worked on the project for 43 years, until his death in 1926.

This lecture will cover the history of the church’s design and construction, concentrating on the six main towers: the highest points of the Basilica. During the 19th century, construction of the church was largely carried out in conventional stone masonry, with recent work using reinforced concrete and stone facing. However, the design of the remaining 40% of the Basilica, due for completion in 2026, will use pre-stressed stone panels. New digital methods and traditional craftsmanship will dramatically reduce the weight, cost and time needed to complete the Basilica. This talk will describe how this new technique evolved, including initial ideas, virtual prototyping, analysis, physical testing, production, and assembly.

To find out more and book tickets, please visit www.raeng.org.uk/events