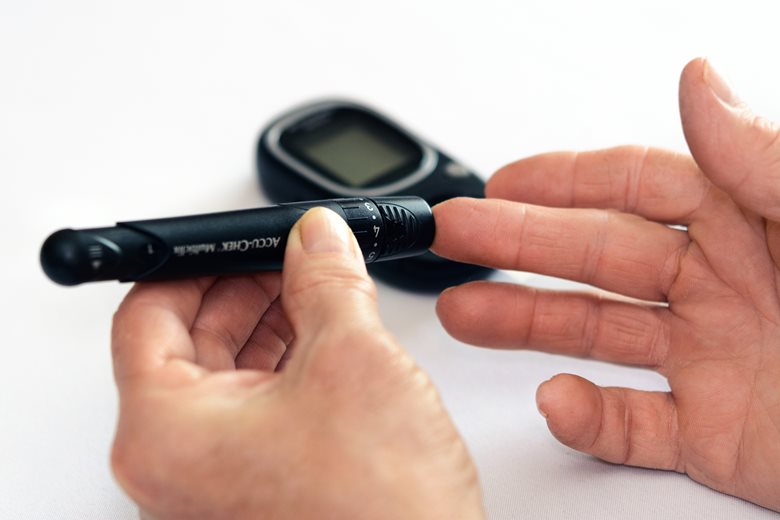 The technology that allows people with diabetes to monitor their blood-sugar levels is well known, and now advances in technology are making this process and treatment easier © Photo Mix/Pixabay

More than 4.7 million people in the UK have diabetes, with around a tenth of these having type 1. Diabetes can lead to serious health problems and the NHS spends £10 billion a year on diabetes treatments – 10% of its entire budget. Writer Geoff Watts spoke to Dr Julian Shapley from Cellnovo and Dr Pantelis Georgiou from Imperial College London about developments in technology that are making diabetes treatment more efficient.

Type 1 diabetes is caused when the pancreas, a gland located behind the stomach, fails to make sufficient insulin, the hormone that controls the amount of sugar in the blood. The remedy is clear, at least in principle: replace the missing insulin. In practice this can be done with insulin injections, but technology has already moved beyond that. Years of technological development have produced ever-improving methods of monitoring blood sugar and increasingly sophisticated pumps for infusing the missing hormone. The ultimate aim has been to create an artificial pancreas that can monitor blood sugar and infuse insulin by itself, at the right time, and in the correct amount.

Although it may be appealing, the term artificial pancreas is misleading. It suggests either a large machine similar to an artificial kidney, or a smaller device, such as a pacemaker or artificial heart valve, that can sit inside the body. The artificial pancreas, as currently conceived, would be neither. Its components – a continuous glucose monitor (CGM) linked to an algorithm-controlled insulin pump – are relatively small, but are still worn outside the body.

The individual components, the monitors and pumps, are already commercially available and current technology has much to offer. Pumps and monitors are making diabetes easier to manage with better results. However, doctors and medical engineers will not be satisfied until they can replicate the body’s own control of its blood sugar exactly, for 24 hours every day, without any intervention by the patient.

This development will have been a century in the making. The first successful use of injected insulin for type 1 diabetes was in 1922. The early 1980s saw the first simple instruments for monitoring blood glucose at home, but it was not until late 1990s that technical advances enabled diabetic people to monitor their own blood levels continuously, and to take appropriate action. However, long before this scientists had recognised that, in principle, a CGM coupled with a pump could detect changes in blood sugar and respond automatically, ‘closing the loop’ as it’s known in the trade.

The first requirement of any blood-sugar control system is a means of infusing insulin into the body at the correct rate. There are many different designs of pump on the diabetes market, most of which rely on the same principle: a screw drive that advances a piston through the barrel of a syringe. That said, the most recent and radical innovation in this field has arisen from abandoning the conventional screw drive. 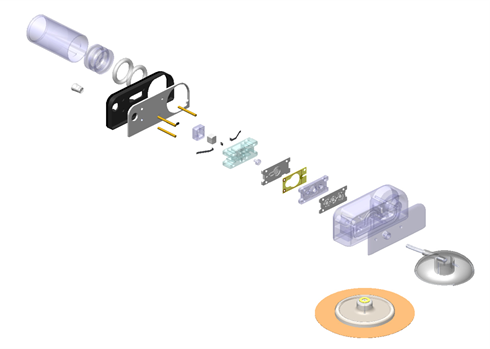 Dr Julian Shapley, a biochemist and microengineer who has spent time working for NASA, has developed a new kind of pump for delivering very small quantities of liquid. Dr Shapley originally designed his device for laboratory use, but re-engineered it when he realised that there was a need for new pumps for the slow, controlled delivery of medicinal drugs.

Dr Shapley’s pump relies on the way that wax behaves when it melts. Wax goes from solid to liquid when heated to about 60oC and during the process its volume increases by 20%. That expansion is enough to drive a small pump. In his system, 21 microlitres (a microlitre is one millionth of a litre) of wax sit in a tiny square delivery chamber, with a flexible silicone membrane on one side. A piston shaft inside a barrel filled with insulin is on the other side of the membrane chamber. A diode embedded within the wax provides the heat needed to melt it. As the wax melts, the membrane bulges and pushes the piston forward in its barrel, expelling a small quantity of insulin into a delivery tube and into a needle through the patient’s skin. As the wax cools, the piston retreats, drawing fresh insulin into its barrel. This insulin is stored in a reservoir that holds enough for several days. To control the flow of insulin from the reservoir in and out of the delivery chamber, Dr Shapley devised a novel pair of microfluidic one-way valves. A predetermined rise of pressure within the chamber closes the entrance valve and opens the exit valve; a fall does the opposite. Each complete forward movement of the piston delivers 0.5 microlitres of insulin.

To monitor the exact amount of insulin being delivered, the system incorporates a patented method of measuring the forward movement of a second, spring-driven piston that maintains the pressure in the insulin reservoir. A radial capacitor detects submicron movements of this piston and converts this piston’s movement into a reading of the true amount of insulin leaving the reservoir and entering the patient’s blood, which is displayed on the instrument’s control panel. The insulin reservoir, along with the pump and needle, form an integrated, disposable device that is replaced every three days.

The technology for continuously monitoring a patient’s glucose is well established and reliable. Self-testing originally used a spot of blood taken from a finger prick and dabbed on to a paper strip that the patient then inserted into a small handheld instrument. These mostly use an electrochemical cell primed with an enzyme such as glucose oxidase or glucose dehydrogenase, which, in the presence of glucose, generates a current proportionate to the concentration of glucose in the blood sample.

Most CGM devices use similar chemistry, but incorporated into a device with a needle-like sensor that penetrates the skin, and remains in situ. This sensor takes glucose readings every five minutes and transmits them wirelessly to a monitor. This automatically instructs the pump to infuse insulin at the rate required to maintain a basal level of activity (continuous supply) in the body’s metabolism. The monitor also allows patients to read their blood-glucose level. They can then use controls on the monitor to begin infusing an additional amount of insulin, which is calculated to cope with any meal they are about to eat. The system will also alert them if, for some reason, their blood-sugar level leaves a predetermined range.

Overnight and for much of the day, these systems – some on the market, others still in clinical trials – routinely oversee the patients’ disorder, giving them peace of mind and freeing them to attend to other matters. This is a valuable achievement, but not the end of the story. The next generation of diabetes control is now undergoing clinical trials.

At first encounter, the exact control of blood sugar might appear to be a straightforward task of a kind long familiar to engineers. You eat a meal, your blood level sugar rises, the pancreas senses this and responds by producing the amount of insulin needed to restore the level to normal. Why have engineers found it difficult to develop algorithms that accurately mimic this control loop?

The first complication lies in the location of the glucose sensor. While the pancreas responds to glucose in the blood itself, CGM devices measure the sugar level in the fluid that permeates the tissues. There is a delay of around 10 to 15 minutes before the sugar concentration in this tissue fluid equals that in the blood. Moreover, the effects of an infusion of insulin are not immediate; there is a lag of up to an hour before the hormone takes effect and the blood sugar begins to fall. If an artificial delivery system fails to take account of this time lag, and goes on pumping out insulin, it will drive the blood sugar to dangerously low levels, causing the patient to suffer a hypo. Another difficulty is the inherent complexity of the body’s own control system, which uses not one hormone but two. Besides insulin, which drives down the blood-sugar level, the pancreas produces glucagon, another hormone that opposes insulin and increases blood sugar. The actual amount of sugar in the blood is a product of the interplay between these two hormones. Finally, there is natural variation. Different people respond differently to a quantity of insulin, so any algorithm must take account of the rate of change of the blood glucose reading in any one individual.

Engineers have been struggling for years to develop algorithms that take account of all these factors. The most advanced currently on the market can be relied on to take charge of insulin infusion overnight when the body’s physiology is relatively stable, with no sudden food intake or bursts of physical activity. But during the day these systems still require users to forewarn them of a meal by pressing buttons on the monitor. Without this human intervention, any response to a sudden sugar load would be too slow to avoid the blood glucose level moving well outside the safe range.

With a variety of satisfactory monitors and pumps available, the focus of engineers working on insulin control is now on improved algorithms. Dr Pantelis Georgiou and colleagues at Imperial College London’s Bio-inspired Metabolic Technology Laboratory went back to basic cell biology in their research. They formulated an algorithm following a close examination of the behaviour of the cells in the pancreas that produce insulin. This resulted in what they describe as the world’s first bio-inspired artificial pancreas, which is now undergoing clinical trials.

In common with others, their ambition is to achieve a closed-loop system that requires no human intervention: no button pressing to preannounce the imminent intake of food. As we salivate in anticipation of a coming meal, we also start to make extra insulin. This is mediated by nerve signals from brain to pancreas that preannounce the arrival of food. Any artificial system needs to imitate this, so the next step towards a completely closed loop is to devise an insulin delivery system that can respond to our intention to eat. The researchers at Imperial College London believe that they can isolate a brain signal that correlates with this intention.

Detecting such a signal, and using it to trigger an anticipatory infusion of insulin, would be the most sophisticated advance yet in mimicking the body’s own arrangements. If it succeeds, diabetics of the future might need one further component in their artificial pancreas, a brain electrode. The system might also use artificial intelligence to build profiles of the individuals using it: when they were most likely to eat and how much; and when they regularly exercised and might therefore need more blood sugar.

All this is for the future. Currently, many people with diabetes have yet to enjoy the benefits of the present generation technology, which already promises a reduced likelihood of the life-changing consequences of poorly controlled diabetes.