The Sixth Sense is a handheld device that uses echo-location and haptic feedback to help people with visual impairments and blindness get about safely.

Brian Mwenda grew up in Kenya and attended an integrated school where he studied with people with disabilities. After studying electrical and electronic engineering, he knew that he wanted to use his skills to develop mobility solutions for his friends with visual impairments. He set up a small lab at home and created his first product, The Sixth Sense. The device aims to give people the freedom to walk around independently. 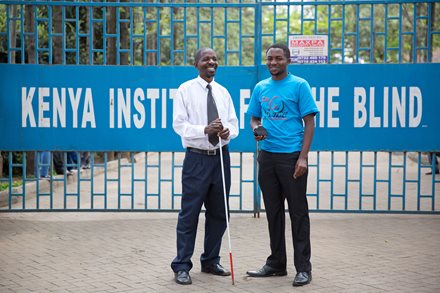 There are almost one million people with visual impairments in Kenya. The Sixth Sense is a handheld instrument that uses echo-location to detect objects up to four metres away. It uses sound waves in an inaudible frequency to detect obstacles: a form of echo-location based on the same principle that bats and dolphins use to move around their environment. Brian’s innovation uses ultrasonic sensors to send out sound waves and pick up the reflected ones when they encounter an object. Factoring in the period between sending the wave and the time it is received, the speed of sound in air, the nature of the reflected wave and other factors, the device can formulate information about obstacles and relay this back to the user through haptic feedback.

A white cane is still the most common navigation tool used by visually impaired people, but one of its drawbacks is that it doesn’t detect obstacles above the knee. The Sixth Sense will alert users to obstacles that they could collide with, anywhere from their head to their feet. The user is alerted by vibrations, with different vibrations signifying different objects.

Objects on the ground will create a different vibration to those that are directly in front of the user or overhanging, and the intensity of haptic feedback increases as the user gets closer to obstacles. The device can also differentiate between people and obstacles. In crowded places, it will recognise a group of people and the vibrations will be toned down to let the user know that they are in a busy street, while still alerting them to other objects with a higher intensity vibration.

The Sixth Sense uses a GPS Internet of Things system, allowing the user to send a pre-chosen contact person their coordinates if they need assistance. The instrument is fully operational as a stand-alone gadget but can be paired with a mobile app to increase the processing power and offer navigation guidance. The app uses machine learning to acquire user patterns and offer the best routes to use based on the reason a person is moving – the route suggested for rushing to a meeting may be different from that for a casual stroll.

One of the main challenges that Brian’s company, Hope Tech +, had to overcome was sourcing the hardware and components for his innovation. Brian collaborated with people across the world who worked on aspects of the product using the materials available in their countries to save time and accelerate product development. Most of the early work was done in Kenya, where 3D printing enabled the team to quickly test different shapes with users. Trials were carried out in the UK, which was where most of the software refinement data was collected. The work came together in Melbourne, where the final product is being refined.

The Sixth Sense device was shortlisted for the 2018 Africa Prize for Engineering Innovation, and Brian took part in HRH The Duke of York’s Pitch@Palace event. The Sixth Sense is due to be launched in East Africa, Australia and the UK in the next 18 months.

How I got here - Natalie Cheung

The film I, Robot, inspired Natalie Cheung to consider engineering as a career. She has gone on to work on several big railway projects.