HOW DOES THAT WORK - Global positioning system

Billions of people around the world rely on a huge engineering infrastructure that extends across the planet and into space. 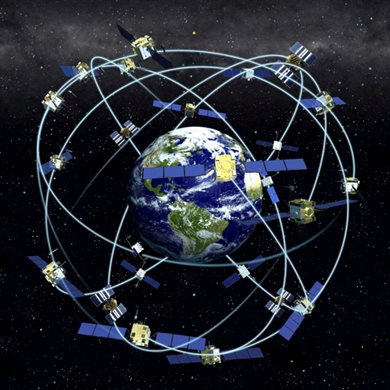 GPS satellites orbit the Earth in one of six orbital planes. They are inclined to the equator by about 55 degrees orbiting twice a day. Their set up is designed to ensure that at least four satellites are visible at least 15 degrees above the horizon at any given time anywhere in the world © NOAA

The global positioning system (GPS) enables anyone with a smartphone or navigation units on cars to pinpoint exactly where they are on Earth, as well as the precise time. It is also used in applications that range from aviation safety and banking to locating and rescuing ships in distress.

The American GPS, started by the US Department of Defense in 1973 as the world’s first global satellite radio navigation system – helped make this possible. It was originally developed for military applications for positioning, navigation and timing services; civilian GPS is now freely available for peaceful commercial and scientific use.

GPS consists of a satellite constellation, a ground control network and user equipment or receivers. It can support a network of 31 operational satellites flying in Medium Earth Orbit at around 12,550 miles above the planet’s surface. The baseline number of satellites used, however, is 24, with 12 for each half of the globe. Each satellite makes a near circular orbit around the globe twice a day, equally spaced around the equator. This allows users from virtually any place on Earth to access the system.

Signals from at least four satellites, using a process called trilateration, are required for latitude, longitude, altitude and time. Each solar-powered satellite broadcasts on the same signal frequency and carries four extremely accurate atomic clocks. It transmits both the spacecraft’s position and its time signal. Distance = Speed x Time. So, a ground receiving device will calculate the distance between the receiver and the satellite. It knows that the signal will travel at the speed of light and then will multiply this by the exact time taken, to work out the location on the ground to within a few metres, and, if on a moving vehicle, estimate the velocity too.
It is worth noting that satellite’s high-frequency, low-powered radio signals are weaker than those from a light bulb and travel by line of sight. They can pass through clouds, glass and plastic, but are blocked or deflected by solid objects such as mountains or buildings and can be slowed by atmospheric conditions. Differential GPS can improve accuracy by computing corrections to the code-based distance range.

The US Air Force (USAF) manages the constellation and each satellite is in one of six orbits enabling it to provide continuous worldwide coverage. Twenty-four satellites were launched between 1978 and 1994 and, because the satellites have a lifespan of 7.5 to 11 years, next-generation satellites began launching from 2005 onwards.

The satellites are tracked by six USAF monitor stations around the world and there are two caesium atomic clocks in each station, referenced to GPS system time. GPS provides a standard positioning service (SPS) for civilian use and a precise positioning service (PPS) primarily for military use.

In recognition of their work on developing GPS, the Queen Elizabeth Prize for Engineering 2019 was awarded to four of the engineers involved in progressing the project during the 1970s and 1980s – see www.qeprize.org
Galileo, the European global navigation satellite system (GNSS), is due to become fully operational in 2020. This alternative system will operate from 24 satellites placed in three orbital planes and has a real-time positional accuracy to within a metre.

The OrganOx metra can keep a human donor liver functioning for up to 24 hours outside the body, creating extra time for transplantation.

Almost 140 years after it was first begun, Gaudí’s La Sagrada Família is almost complete. Modern construction techniques will complete the building in time for the centenary of Gaudí’s death in 2026.

Darktrace’s software detects and defends against cyber threats from within computer networks.