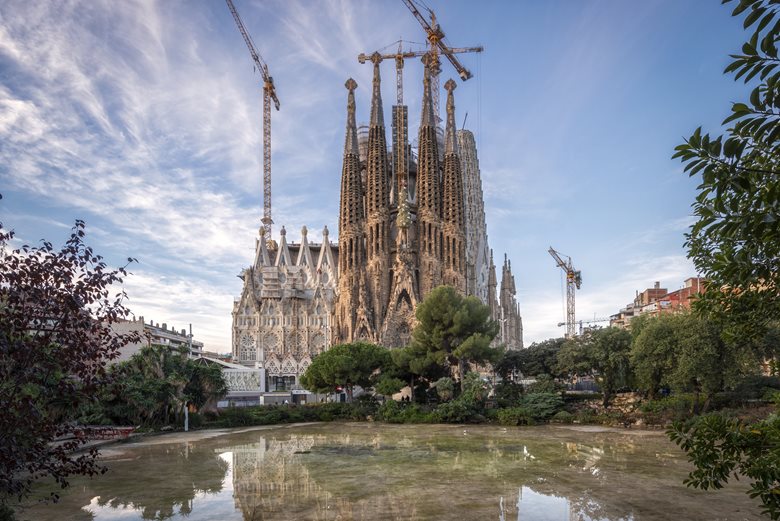 The Nativity Façade of La Sagrada Família, Barcelona. Construction work began on the basilica in 1882 and has been ongoing since © Fundació Junta Constructora del Temple de la Sagrada Família

Antoni Gaudí’s masterpiece, the Sagrada Família church in Barcelona, has been under construction for nearly 140 years, but only 60% of the structure had been built by 2014. Now, using modern engineering and construction techniques – including innovative prefabricated prestressed stone panels – the remaining 40% is due to be completed by 2026, the centenary of Gaudí’s death. Tristram Carfrae RDI FREng, deputy chairman of Arup, explained to Hugh Ferguson how this is being achieved without compromising Gaudí’s vision or quality standards.

Arup was called in to collaborate with the Sagrada Família Foundation and its well-established team of in-house architects and builders in 2014, initially with one particular challenge: one of the 18 towers – the Mary Tower over the crypt – was going to weigh too much for the foundations installed in 1877, and some fresh ideas were needed. How could a tower be designed and built that would work both structurally and visually, while following the guidelines that Gaudí had set, and maintaining the highest quality? An earlier idea had been to erect an interior steel structure on which stonework could be hung, but this was seen as inappropriate.

Meanwhile other factors were at work. The trickle of donations to fund construction had turned into a torrent, as Barcelona’s booming tourist industry brought more paying visitors, particularly after the completion of the nave and consecration of the church by Pope Benedict in 2010 – there are currently some four million visitors per year. A major constraint on the speed of construction had been removed, and the bold decision had been taken to complete the structure (but not necessarily the decoration) by 2026. This required a tenfold increase in the speed of construction compared to the previous 130 years.

Another element to consider was that traditionally all construction work for the church had been done on the site, which was becoming cramped as the building expanded. It was also becoming unmanageable, as the pace of construction (and hence the workload) increased, and the church was still having to remain open for its many visitors. The case for off-site fabrication was strong.

The first action was to determine the shape of the tower. No models or drawings of the Mary Tower survived, so a design had to be recreated from fragmentary archival evidence and by extrapolating from Gaudí’s use of geometry (see box) in his model for the sacristy. A series of hyperbolic paraboloids were rotated about a central axis and intersected. This was then modelled in Rhino 3D software and elongated to create a tower with a scalloped multi-sided shape in plan, with many small triangular windows, shaped as hyperboloids.

Next a structural form was needed. Various ideas were conceived, modelled in Rhino and then tested by finite element analysis to reveal the stress levels in each element under different loading conditions. Earthquake loading was important, but in most cases the critical condition was under extreme wind loading. Each idea was tested at various levels of computer analysis, starting with the ‘quick and dirty’ and moving swiftly to the highly detailed.

As a start, Arup modelled what would happen if the tower was built in traditional stone masonry (thin enough to be within the weight that could be carried by the foundations). Under normal loading the tower behaved reasonably well but under extreme wind loads all parts of the masonry facing the wind went into tension. As traditional masonry is very strong in compression but very weak in tension this approach would not work.

After further modelling a potential solution was proposed. Instead of using traditional construction, what if the masonry was pre-formed in larger panels and prestressed using tensioned steel rods before erection? In this way, the masonry could be pre-compressed so that it would be much less likely to go into tension under wind loading. Panels around 4 metres high by 3 metres wide, 14 to a ring of the Mary Tower and weighing around 5 tonnes each would suit the geometry and be reasonably easy to create and erect. The panels could then be simply bolted together, with shear connectors on the horizontal joints. 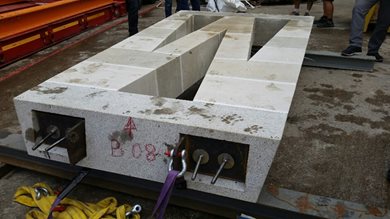 A prototype column, showing the stainless steel rods threaded through the drilled masonry, and the anchorage plates for prestressing © Arup

Finite element analyses demonstrated that this strategy could work. Under extreme wind loading, almost all elements of the panels remained in compression, though there were some elements that could move into tension (red, in the diagram), which could then lead to a crack forming in the masonry. The question then was whether the crack would open up with serious consequences or whether the loads would redistribute safely in the remaining structure: a simple re-run of the analysis removing the element in tension, confirmed the latter.

The prestressed masonry panels had the additional advantages that they retained the use of Gaudí’s preferred sandstone as the primary structural material, they were ideally suited to off-site construction, and they achieved the necessary weight reduction: the stone in the panels is just 300 millimetres thick, compared with around 1.2 metres for traditional masonry, and resulted in a structure just light enough for the foundations.

Once the overall form was determined, the team modelled every component of each panel to a construction level of detail, including nuts, bar threads, couplers, fillets and chamfers. In this they were assisted by full-scale mock-ups produced by the Foundation, to check appearance, and for ‘buildability’. Every detail was carefully planned, and a kit of parts assembled including the stainless steel rods and bolts for the prestressing. Careful design of connections combined with precise manufacture ensured that the panels when craned into position could fit together like Lego blocks, with no on-site adjustment.

OFF-SITE PREPARATIONS
Meanwhile a suitable fabrication site was found north of Barcelona, some 90 minutes from the church. Here the digital model was used to automatically cut the stone, with its angled jointed surfaces finished to within 1 millimetre by computer-controlled cutting. A more traditional method was used to match the rest of the church with the outer finish of naturally broken sandstone: the edges were hit very hard with a sledgehammer.
Then the individual stone blocks were fabricated into a panel using laser-cut plywood templates, and prestressed with machined duplex stainless steel bars, inserted through holes predrilled through the masonry. Finally the holes were grouted, to provide further long-term protection to the steel rods.

In this way a production line was formed. Each of the 14 panels in a ring was identical, so there was helpful repetition, but as the tower is tapering, each successive ring was smaller as the tower rose. It took a month to fabricate each ring, but then only a day to assemble it on site: the care taken in design and the accuracy of manufacture meant that the panels slotted together rapidly with a minimum of fuss, so minimising both the use of limited crane access at the church and disturbance to church activities and its visitors.

The principle of prestressing masonry panels and the off-site production method have been adopted for construction of the remaining towers, in particular, the tallest of all, the mighty Jesus Tower that sits above the crossing of the nave. Before Arup’s arrival, the plan had been to build the tower in reinforced concrete and clad it in stone. But experience with the Mary Tower demonstrated that prestressed masonry panels would not only be more appropriate, but also easier and faster to build. 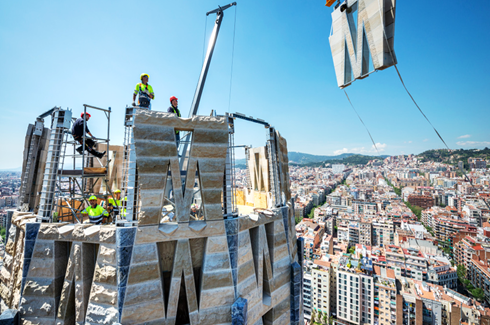 Construction started in July 2019 and the process has been identical to the Mary Tower except on a larger scale: the masonry thickness is 450 millimetres instead of 300 millimetres, there are 12 panels per ring instead of eight and each panel weighs 25 tonnes instead of 5 tonnes. When the Jesus Tower is ‘topped off’ with its five-armed cross, the Sagrada Família will be (at 172.5 metres) the world’s tallest church and Barcelona’s tallest building.

Inside the Jesus Tower a lift and staircase will carry visitors up into the cross. The spiral stone staircase will be cantilevered from the inside of the stone-panel wall, following a long tradition in masonry architecture. In this case, there is the added complication that the staircase has to span some of the openings in the tower: the solution, again, is to post-tension the stone to allow the staircase to bridge the gaps. The lift shaft will then be assembled up the middle of the tower.

Tristram Carfrae is well used to working closely with architects and builders worldwide, but never before has he experienced such close collaboration – due in part to the long-established in-house architect/builder team and in part to the simple, shared objective: to build the best church in the world. “It just makes me inordinately happy, and fulfilled, and pleased that I became a structural engineer to get to work on things like this.”

For more information about the project see www.arup.com/sagrada-familia

BIOGRAPHY
Tristram Carfrae RDI FREng is a structural engineer and Deputy Chairman of Arup. He has been responsible for the design and structure of many award-winning buildings during his 37 years with the firm, both in Australia and the UK. In 2014 he was awarded the prestigious Gold Medal award by the Institution of Structural Engineers and in 2018 he became the fourth Briton to receive the IABSE’s International Award of Merit in Structural Engineering.

The OrganOx metra can keep a human donor liver functioning for up to 24 hours outside the body, creating extra time for transplantation.

Lasers to change the world

Lasers have uses ranging from physics research to atomic clocks, but the engineering behind the lasers has its own challenges.

Darktrace’s software detects and defends against cyber threats from within computer networks.