These geothermal systems harness natural heat from underground to provide heating for buildings.

Ground source heat pumps (GSHPs) have been used for many years in North America, Sweden and Germany. Now they are being increasingly deployed in homes and commercial buildings in the UK, with the government providing financial incentives to owners who install them. 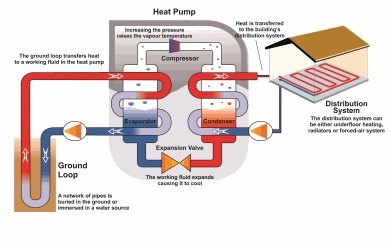 GSHPs are made up of three elements: a ground-heat exchange loop, a heat pump and a distribution system above ground. High-density polyethylene pipes are laid out underground, usually in coils to maximise the length available; for every 10 metres of pipe, one kilowatt of energy can be absorbed from the ground. The pipe is usually laid in horizontal trenches next to the building. If there is not sufficient room in the garden, a borehole can be drilled down to a depth of 15 metres to 150 metres. Another option is to lay the pipes in a pond or lake.

A mixture of water and antifreeze is then pumped around the loop absorbing the trapped underground heat (around 10°C). The water mixture is then compressed and passes through a heat exchanger, which extracts the heat and transfers it to the heat pump.

The heat pump consists of an evaporator, compressor condenser and expansion valve, and uses the principles of the Carnot cycle to increase pressure and raise vapour temperature (up to 50°C). The evaporator converts the working liquid to a vapour; the compressor significantly raises its temperature and pressure; the condenser transfers the heat to the building’s distribution system; and then the expansion valve cools things down so that it becomes, once more, a cold mix of liquid and vapour.

The maximum efficiencies derived from this system are through underfloor heating or large, low temperature radiators. If the heat pump needs to reach a higher temperature, the efficiency is reduced.

GSHPs generate less carbon dioxide than conventional heating systems although they still require electricity to drive the compressor unit and the circulation pumps. If this electricity is derived from renewables it becomes zero-carbon to run. For every unit of electricity used to work the pump, between three to four units of heat are made.

GSHPs can also be used on large-scale projects. The UK’s largest GSHP system was recently completed in Enfield, London. A total of 400 flats across eight tower blocks were linked up to eight boreholes. Each flat has its own heat pump and it is expected that the residents will see their energy bills reduced by 30% to 50%. The initiative won the 2019 District Heating Project of the Year.

There is also a market for air source heat pumps in the UK. These operate in a similar way to GSHPs but use air to transfer heat from outside a property to the inside. The upfront costs are lower as they don’t require any digging, just a unit set up alongside. However, air source heat pumps are less efficient than GSHPs because they are subject to fluctuating air temperatures and must work harder (use more electricity) to produce heat when the outside air temperature is lower.

The Thames Tideway Tunnel is the UK’s largest ever water infrastructure project. Its centrepiece is a 25-kilometre sewage tunnel deep below the River Thames.