Spaceports represent an ingenious solution to the logistical challenges of launching small satellites into orbit. Neil Cumins reports on two spaceports at opposite ends of the UK that are using different methods to launch low Earth orbit satellites into space.

Next time you find yourself admiring the stars on a clear evening, take a moment to think about a manmade contribution to the skies above us. There are currently over 2,200 satellites orbiting the Earth, performing a variety of civil, commercial and state-level functions. However, rather than occupying a traditional geostationary orbit 36,000 kilometres above the equator, over two thirds of these satellites are in low Earth orbit, less than 2,000 kilometres above the Earth’s surface.

Despite occupying a far lower altitude, low Earth orbit satellites have traditionally been launched into space using rockets, just like their geostationary cousins. These inefficient vertical-lift propulsion devices burn immense amounts of energy attempting to escape Earth’s gravitational pull. For over 60 years, governments have been experimenting with alternatives to rocket-based satellite launches, and recent technological developments have heralded the arrival of the horizontal launch vehicle. So, how do horizontal launches work, and why are the spaceports they depart from being developed from Cornwall to the Shetland Islands? Since 1957, when Sputnik I was successfully launched from the Baikonur Cosmodrome in what is now Kazakhstan, vertical take-off has been the only practical method of launch suitable for large satellites. However, recent advances in power and utility have resulted in smaller and lighter satellites. A small satellite is defined as one with a mass less than 500 kilograms, and almost three quarters of satellite launches planned for the next decade will be in this category. Some are the size of a shoebox, weighing as little as 25 kilograms, yet they’re often able to complete tasks that would have been the domain of geostationary satellites just 20 years ago.

As satellites have become smaller and lighter, the necessity for vertical launches has diminished, and horizontal launches have risen to prominence. While fuel volumes vary according to factors such as the weight of the payload, a vast amount of energy is expended accelerating vertically from standstill to 26,700 kilometres per hour (the minimum speed required for a satellite to enter a circular orbit 800 kilometres above Earth’s surface), while travelling through the five layers of our atmosphere. It’s long been accepted that high-altitude launches from the troposphere (11 kilometres up, or around 37,000 feet) require far less fuel to send a satellite into orbit. Indeed, air launch technology has already underpinned a number of pioneering inner-space projects, from the US Air Force’s X-15 to Orbital’s Pegasus rocket.

These horizontal take-offs can be carried out by existing high-altitude vehicles, such as a plane or a balloon. These have already done the hard work of escaping the densest part of Earth’s atmosphere and its strongest gravitational pull. An upper atmosphere launch location means that microsatellites can be launched into low Earth orbit comparatively affordably, potentially opening the market to smaller companies with limited funding.

The launch vehicle itself can be safely returned to Earth and reused, with no parts shed (or at risk of falling back to Earth). This distinguishes them from vertical take-off rockets, whose immense fuel canisters are discarded as they struggle to escape the planet’s gravitational pull. There’s also an added irony that this propellant and its storage canisters contribute most of the rocket’s weight on the launch pad. This further increases the four forces of flight acting on the launch vehicle (weight, lift, thrust and drag), all of which are negative factors in terms of everything from aerodynamics to fuel consumption.

A high-altitude launch also permits the use of efficient fuels that are banned from surface launches because of their relative toxicity. Stratospheric air launches aren’t impacted by the tropospheric weather that could otherwise cause delays, and there are no issues with noise when a rocket is launched from 10,600 metres in the air.

Across the UK, companies and entrepreneurs have been developing innovative ways of launching small satellites without having to build launch pads and achieve escape velocity, taking advantage of these benefits.

The UK has long punched above its weight in terms of satellite manufacturing. Today, one in eight satellites in the skies was manufactured in the UK. The space division of Airbus has facilities in Stevenage, while American-based Spire Global manufactures all its satellites at Glasgow’s fittingly-named Skypark. Remarkably, Glasgow builds more small satellites than any other city in Europe, with the space industry contributing almost £15 billion to the UK economy each year. Indeed, the UK Space Agency has set itself a target of boosting this to over £40 billion by 2030, which would comprise a 10th of the global space economy.

Yet while the UK leads the world in satellite manufacturing and data processing, it has never had a launch site capable of sending these delicate scientific objects into space. Vertical launch sites need to be located in vast, remote (and ideally equatorial) regions, and every launch was state-funded until the 1980s. The private sector has grown in stature since then, but the continuing reliance on vertical launches has seen Glasgow satellites being shipped thousands of miles at great expense to launch sites in locations such as India. The UK is at the forefront of the world’s burgeoning horizontal launch sector. Spaceport Cornwall has become the UK’s first horizontal launch site, using modified passenger aircraft as the satellite launch vehicle. Its status was secured by factors including immediate access to the North Atlantic with no national borders to traverse, relatively uncongested airspace, and a suitably lengthy runway already in situ. Combining civilian flights with satellite launches is a world first for any airport, but one aeroplane is very similar to another, with comparable take-off and landing procedures. Cornwall has the geographical advantage of being on a peninsular in the Atlantic ocean, and rockets can be deployed at 10,600 metres at around 480 to 800 kilometres off the coast west or north of Ireland depending on the required trajectory. However, an airliner could also take off from Cornwall and travel to any desired location before discharging its payload into a designated orbit.

Spaceport Cornwall uses the existing 2.7 kilometre runway at Cornwall Airport Newquay to send a modified carrier aircraft from partner organisation Virgin Orbit up to a standard cruising altitude of 10,600 metres, with a payload stowed underneath the aircraft’s body. The pilot pulls the aircraft up to a relatively sharp pitch angle to facilitate the release of a 16-metre two-stage rocket that houses the satellites. This is dropped from under the aircraft wing – one of five air launch configurations known as ‘captive on bottom’. Alternatives include towed or internally-carried upper-stage air launch systems. 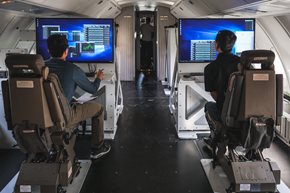 Virgin’s LauncherOne rocket is capable of carrying a gross payload of 500 kilograms. As this is dropped from the aircraft’s wing, the main stage engine ignites, before detaching once its fuel is spent. The second stage then ignites to complete its satellite payload’s journey into a low Earth polar or Sun-synchronous orbit. Once the payload has been successfully deployed, the carrier aircraft returns to the runway ready for its next mission. This enables rapid creation or replenishment of satellite constellations, and it is possible to schedule flights at just 24 hours’ notice.

While horizontal launches are not new, the dwindling size of satellites has meant that their delivery vehicles have also been able to shrink in size, cost and environmental footprint. Far less fuel is expended getting an aeroplane to 11,000 metres than a vertical launch rocket, and Virgin Orbit’s Cosmic Girl launch aircraft is a reconditioned passenger airliner (see ‘Who’s that girl’ box). The approximate cost of launching each satellite is around £10 million – a tiny amount compared to the cost of a vertical launch. With Cornwall acting as Virgin Orbit’s European operations hub, launches could be scheduled mere days in advance without disrupting existing air traffic. 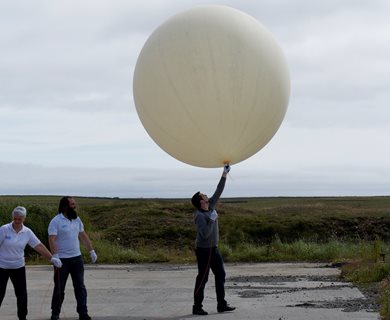 Over 900 miles north of Spaceport Cornwall, on the island of Unst, another domestic spaceport is taking shape using more traditional aviation technology. Located at the very edge of the Shetland Isles, two kilometres from Britain’s most northerly house, the embryonic Shetland Space Centre offers a unique set of advantages as the location for low Earth orbit satellite launches from balloons. Direct flightpaths into polar and Sun-synchronous orbits do not pass over population centres or oil installations, and there is no interference from commercial airline traffic or military flights. In locations affected by one or more of these factors, dogleg launch trajectories are generally required – necessitating larger rockets and smaller payloads.

High latitude means that at the North Pole, satellites can be seen an unrivalled 16 times a day. Because Unst boasts the UK’s highest latitude, Shetland Space Centre’s comparable figure of 9.4 viewings per day is the best in the UK, making it an optimal location for downloading data from space. Unst has logistics infrastructure and supply chains already in place for the dwindling North Sea oil and gas industries, and after four decades of reliance on the oil and gas sector for jobs, Shetland boasts an established local workforce of talented engineers with transferable skills.

Companies like Lockheed Martin and ArianeGroup have already entered into partnerships with Shetland Space Centre (SCC). SSC is currently submitting a planning application to develop a 190-acre site across Lamba Ness and a former RAF airbase, incorporating everything from satellite assembly buildings to rocket fuelling facilities. In the meantime, SSC has hosted a test balloon launch by Bristol-based B2Space last summer. This successful trial demonstrated the viability of the Rockoon rocket launch technology, adapting a 1950s US Navy concept of conducting launches from a high-altitude balloon. Similar tests have already been conducted in the US’s Mojave Desert, and it is anticipated that 25 kilogram satellites the size of a toaster could be affordably launched from 100-metre-tall gas-filled balloons, slowly ascending to the stratosphere before discharging their payload into orbit.

There is also a fringe benefit to the use of small satellites, which are intended to last a couple of years before falling out of orbit and burning up without leaving any space debris behind. Their shorter lifespans (compared to the 15 to 20 years of geostationary satellites) will necessitate a consistent turnover of new satellites being launched from facilities like Spaceport Cornwall and Shetland Space Centre. This cycle of regular replacement will provide long-term revenue streams for UK spaceports, supporting jobs and helping to maintain the UK’s position as a world leader in satellite design, manufacturing and launch.

The Thames Tideway Tunnel is the UK’s largest ever water infrastructure project. Its centrepiece is a 25-kilometre sewage tunnel deep below the River Thames.