A cofferdam was constructed on Blackfriars north foreshore so that a dry workspace could exist below the level of the River Thames. A drop shaft has been designed to intercept both the LL1 sewer located within the listed Bazalgette river wall and the existing Fleet sewer outfall, which is located under Arch 1 of the Blackfriars Bridge, to the new Tideway tunnel. The shaft is now excavated to a depth of 23 metres and when completed will be 53 metres deep (to invert level) with an internal diameter of 22 metres © Tideway

Tideway is an epic civil engineering project. At £3.8 billion, it is the UK’s largest ever water infrastructure undertaking. It includes 25 kilometres of large-diameter tunnel deep below the River Thames, with 23 huge shafts and a workforce of 4,000. To Tideway’s Chief Executive Officer, Andy Mitchell CBE FREng, it represents even more than that. At the halfway point of the project he spoke to Hugh Ferguson about his mission to reconnect Londoners with their great river.

The new Thames Tideway Tunnel will divert the millions of tonnes of raw sewage that flows into the Thames each year, and take it, by gravity, through a new tunnel to Beckton sewage works in east London. Construction started in 2016 with all work due to be completed in 2024.

Tideway will supplement rather than replace Sir Joseph Bazalgette’s great network of sewers, completed in 1865 to combat the ‘Great Stink’ from the polluted Thames. Bazalgette estimated that the system, one of the greatest engineering achievements of the Victorian era, prevented around 12,000 deaths a year from cholera and other waterborne diseases.

Bazalgette’s system comprised 2,100 kilometres of brick-lined sewers feeding into 131 kilometres of large interceptor sewers running west to east, parallel to the river. They stretched from Abbey Mills pumping station (and then to Beckton) on the north side of the river, and to Crossness pumping station in the south. He built the tunnels to last – 150 years later, they are still in remarkably good condition, and can continue to transport most of London’s sewage for years to come. 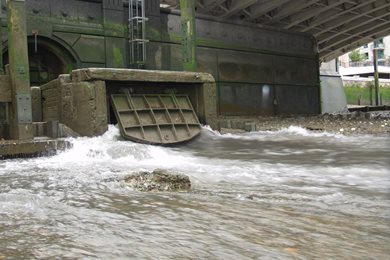 Bazalgette also designed the tunnels so that, unlike some other cities’ sewerage systems, they carry both sewage and storm water run-off, thus avoiding the need to dig up London’s streets twice. He planned ahead, designing a system for a population of more than four million at a time when the actual population was only two million. Even so, rainfall is variable and Bazalgette realised that his system could not cope with the greatest storms, so he included a series of 57 combined sewer overflows (CSOs). During extreme events, these overflows allow rainwater and sewage to overflow into the Thames, rather than cause a back-up that would flood streets with sewage.

Three factors have combined and the system can no longer cope. Bazalgette’s ‘design population’ of four million has increased to nine million and much of London’s space has been transformed from open ground (which can absorb a great deal of rainwater) into buildings or ‘hard standing’, with water draining directly and immediately into the sewers. Thirdly, a consequence of climate change is more erratic and extreme weather, so that the water engineer’s benchmark of a ‘hundred-year storm’ may now happen three times in five years.

The overflows, initially required about twice a year, are now used 60 times a year, and rising, tipping a staggering 40 million tonnes of sewage a year into the Thames. Worst of all, when heavy rain follows a long dry spell, when the system fills with sewage, the ‘first flush’ into the Thames is concentrated sewage. 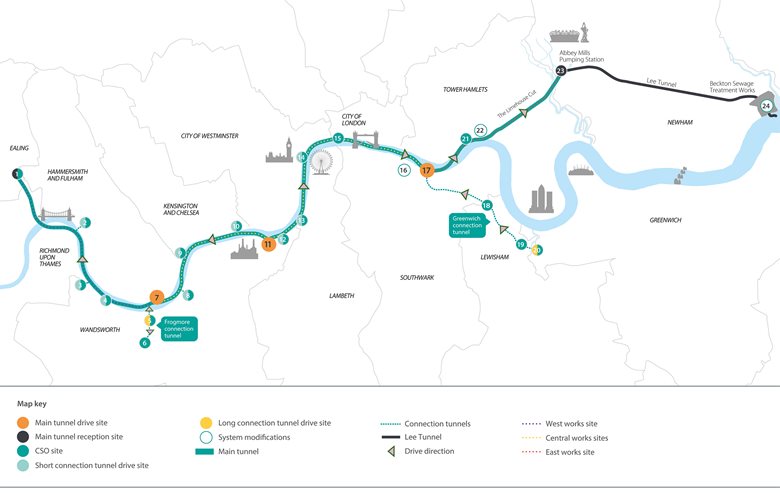 Tideway’s job will be to capture all of this overflow and initially store it in its new network of shafts and tunnels, which together form a huge 1.6 million cubic-metre underground reservoir, releasing it only as fast as the pumps and sewage works at the eastern end can cope. The main feature of the network is a huge 7.2-metre internal diameter tunnel (large enough to fit three double-decker buses) running 25 kilometres from Acton in the west, beneath the Thames through central London, and then veering north to Abbey Mills in the east. Some £1.1 billion of preliminary works have already been completed by Thames Water – including the Lee Tunnel, the easternmost (and deepest) section of tunnel, from Abbey Mills to Beckton.

The tunnel is deep, principally to avoid London’s myriad existing underground services: 30 metres in the west, with gravity flow to 66 metres at Abbey Mills (and deeper still at Beckton). Tideway has 23 sites for constructing its huge shafts that connect the overflows on either side of the river to the main tunnel. Some are also used for lowering and lifting the massive tunnel boring machines (TBMs).

Digging the Lee Tunnel required considerable technical innovation, in part as a testbed for the work on Tideway itself. These innovations included hydrofraises (large crane-mounted drilling machines with twin counter-rotating cutters mounted within a steel frame) for sinking panels under bentonite slurry to create the primary concrete linings of shafts and the use of slip forming to build the inner concrete linings of the shafts. Another innovation was the use of fibre optic monitoring to check structural behaviour of the shafts during construction. The Lee Tunnel also made widespread use of fibre-reinforced concrete in place of conventional reinforced concrete (see Lee Tunnel article in Ingenia 63).

Most of these innovations have been carried over to the Tideway project. Additional innovations include a lining erection machine for placing the secondary, inner lining on the east section. This will be similar to the back-end of a TBM, erecting precast segments to form the tube. This promises to be faster, more economical, better quality, safer, and more environmentally-friendly than the conventional method of casting the concrete inner lining in-situ. One of the hydrofraises has also been converted to electrical power, demonstrating the feasibility of converting much of the heavy plant on construction sites to electric power, with clear environmental advantages for the future. This electrification was made easier because some shafts already carried heavy duty electrical power for the TBMs.

The two TBMs on the east section are, as on the Lee Tunnel, slurry tunnelling machines. The other four, with different ground conditions, are earth pressure balance machines. Four TBMs are driving the main tunnel while the other two, smaller but still larger than any of the Crossrail tunnels, are digging connection tunnels. The longest of these tunnels, at five kilometres, due to start construction in June/July, will carry overflow from the Greenwich pumping station to the main tunnel at Chambers Wharf in Bermondsey.

Construction is currently at its peak with just over half of the main tunnel driven. Some shafts are completed; all have been started. Costs were revised upwards last year from the original target of £3.5 billion to £3.8 billion, due mainly to redesign of the works at King Edward Memorial Park in Tower Hamlets and Blackfriars – see Blackfriars Bridge work. 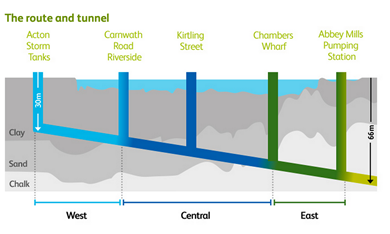 Construction has been divided into three sections – west, central and east – each with a separate consortium of contractors

As at Blackfriars, work at King Edward involves creating a cofferdam in the river to enable a shaft to be sunk and connected to a local CSO. As fill was being placed inside the steel sheet-pile cofferdam, the piles started to deflect outwards at the top. Further ground investigation revealed an unexpected layer of soft, weak ground near the surface, resulting in the tops of the piles not being properly anchored. Concrete piles were added where necessary to stabilise the cofferdam, enabling backfilling to be completed, but two problems remained: the layer was predicted to settle over time by up to one metre, and the diaphragm walls for the permanent works could not be sunk through the weak ground. The solution was ‘deep soil mixing’. Some 1,500 tubes were sunk up to 13 metres deep, inside which augurs were used to stir in a cementitious stabiliser. The front end of ‘Rachel’, the tunnel boring machine (TBM) driving the western section of the main tunnel, being lowered down the shaft at Fulham. Tideway’s six TBMs are each named after an inspirational woman from the local area, chosen by the public from a shortlist. The name ‘Rachel’ commemorates the pioneering engineer Rachel Parsons, daughter of Sir Charles Parsons, the inventor of the steam turbine. During the First World War she replaced her brother as a director of her father’s company. She was founder President of the Women’s Engineering Society (Ingenia June 2019) and in 1920 co-founded the engineering company Atalanta Ltd in Fulham Road, where all the employees were women

Tideway itself has demonstrated how the river can be reinstated as a transport artery. Its barges bring most of the materials into the sites (using offsite construction where possible) and have carried away 95% of the nearly one million tonnes of tunnelling spoil. This represents 130,000 lorry journeys avoided, making the barges the largest users of the central London section of the Thames.

With most of the high-risk work now over, Andy Mitchell CBE FREng, Tideway’s Chief Executive Officer, is confident that completion of tunnelling – by 2022 – should be free of unpleasant surprises, as will the subsequent commissioning phase. But his concern for the river will last long after Tideway is opened and he has moved on.

London’s population is still increasing, more ground is being covered with hard surfaces, and climate changes will make heavy storms more frequent. Even on opening, Tideway will not be able to cope with the strongest storms: it has its own CSOs, which will be used about twice a year, though the sewage released will be much more diluted than now. Projections suggest that in as little as 60 years, unless something is done, Tideway’s CSOs will be operating increasingly frequently, and London will need another Tideway tunnel.

So Londoners have 60 years to change their ways. The solution will require a combination of measures, which include sustainable drainage systems to contain the storm surges. These will include a series of relatively small-scale measures such as retention ponds, soil percolation and bio-filtration, all integrated into the urban drainage system.

This would be combined with the adoption of planning controls for new buildings. These may require, for example, dishwasher water to be recycled in the home to flush toilets, or rainwater capture systems in all homes to hold storm water and then release it gradually to the drains – much as the Thames Tideway Tunnel will do on a larger scale from 2024.

Andy Mitchell feels that such changes will require public support and personal choices. Londoners need to fall in love with their river again, and insist that it is properly respected – and never again treated as an open sewer.

BIOGRAPHY
Andy Mitchell CBE FREng was programme director of the Thameslink rail project and then of Crossrail before joining Tideway as CEO in 2014. His is also co-chair of the Construction Leadership Council.

Spaceports represent an ingenious solution to the logistical challenges of launching small satellites into orbit.