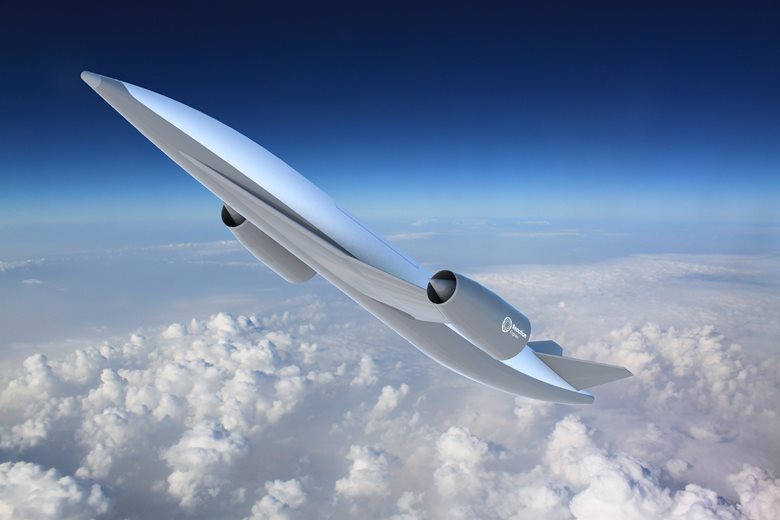 SABRE technology could allow launch vehicles, such as a SABRE-powered spaceplane, to have aircraft-like operation © Reaction Engines

Successful completion of high-temperature tests of a unique precooler system for jet engines could be a key breakthrough in space travel. A team from Reaction Engines devised the test programme and won this year’s Royal Academy of Engineering Colin Campbell Mitchell Award. Hugh Ferguson talked to Dr Helen Webber, engineering project lead, about the significance of this development, which could also have important applications closer to Earth.

Each year there are about 100 launches into space worldwide (compared to 100,000 flights per day on average), despite the growing demand for Earth-orbit operations such as communications and meteorology, and the desire for exploitation of the Moon and exploration of Mars and beyond.

For decades, the principal constraint on growth has been well understood. Despite efficiency improvements, escaping the Earth’s gravity and getting into low Earth orbit is still extremely expensive, requiring large, fuel-guzzling, multi-stage, single-use rockets carrying relatively small payloads: around 90% of a space rocket’s weight at launch is propellant. As a result, each launch typically costs around $100 million (payload dependent), there are long waits for ‘slots’, and the failure rate is generally between 2% and 5%.

The founders of Reaction Engines wanted to devise a hybrid jet/rocket engine to power a single-stage, fully reusable launch vehicle able to take off and land horizontally on an airfield, which could cut the costs of reaching low Earth orbit by a factor of 10 as well as enabling a fast turnaround of the vehicle.

The essential difference between jet and rocket engines is that a jet draws in air (and therefore oxygen) from the atmosphere to help fuel combustion, and therefore doesn’t have to carry it on board while the jet engine is in operation. By contrast, a rocket carries all its own fuel, including liquid oxygen, most of which is consumed in multiple stages during launch. This is the only option in space where there is no oxygen. This mass saving in jet engines enables a transformation in the vehicle design (a rocket into a ‘spaceplane’), with the implementation of heavier systems such as wings and undercarriage. 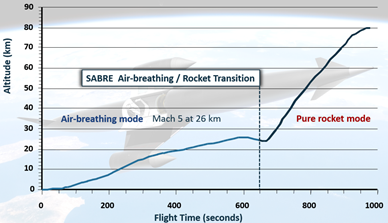 The concept of the SABRE engine for entry into space: an air-breathing jet for horizontal take-off and flight up to Mach 5 at 26 kilometres altitude, and rocket mode beyond © Reaction Engines

The ‘dream’ is to create a vehicle that uses a jet at low levels and speed – up to Mach 5 (five times the speed of sound) at around 26 kilometre altitude – and then switches to rocket power to reach orbital velocity (around Mach 25).

The greatest challenge is devising a very lightweight jet engine that can operate at Mach 5, two and a half times the speed of Concorde and much faster than the world’s fastest jet, the Lockheed SR-71 Blackbird at Mach 3.3. Hence Reaction Engines’ SABRE (Synergetic Air Breathing Rocket Engine), the world’s first air-breathing part jet, part rocket engine, which relies on an innovative precooler heat-exchanger technology. Finding a practical way to cool the air entering the turbo-compressor to a temperature that the engine can withstand and operate efficiently in proved the most challenging aspect of the engine itself.

At these speeds, due to compression effects, the air entering the housing around the engine would be at around 1,000°C, the temperature of molten lava and sufficient to melt parts of the engine. If this could be reduced rapidly to ambient sea-level temperature, then heat-resistant and generally heavier alloys could be avoided in the engine, and performance could be greatly improved: cooler air means a higher compression ratio and a more efficient engine.

But how do you design an ultra-lightweight precooler heat exchanger that can cool air from 1,000°C to ambient in less than 0.2 seconds (the blink of an eye)? And how do you then test it – without the time and expense of building the whole engine and testing it in flight – when nothing like it has been attempted before? 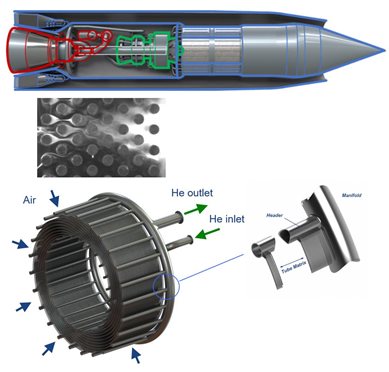 The three main elements of the SABRE engine, each being developed in parallel under separate programmes: the housing (blue) including a bypass ramjet and the crucial precooler; the air-breathing core engine (green); and the rocket system at the rear (red). Bottom: The HTX test version of the precooler showing the spiral arrangement of tiny tubes carrying the helium coolant. Hot air enters radially from the outside and exits to the rear towards the turbo compressor © Reaction Engines

For a spaceplane, the precooler needs to achieve around 400 MW heat transfer, equivalent to the output of a large power station. The Hot Heat Exchanger test programme (HTX) version is smaller and only requires 3.8 MW – which is still equivalent to the power required for 4,000 homes – although in most other respects it is the same as the full-scale version, and operates in the same conditions, including temperature and pressure.

The precooler is designed with an array of thin tubes through which the coolant (helium) flows, designed to maximise surface contact, and therefore heat transfer, while resisting the very high temperatures – up to 700°C in the tubes – and temperature gradients.

The core of the HTX is an array of 16,800 of these tiny tubes, arranged in a series of spirals within a 1-metre diameter cylindrical shape (see diagram). Each tube has just a 1-millimetre outer diameter with walls thinner than a human hair, manufactured from Inconel – a nickel-chromium-based super alloy, resistant to heat and creep. There are more than 39 kilometres of tubes, but their total mass is only 50 kilograms.

The air stream flows radially inwards through the precooler, while the helium coolant flows spirally outwards from the inner to the outer header. This counter-flow arrangement maximises the heat transfer rate while minimising pressure losses through the system.

Air is a poor conductor, and the multitude of thin tubes maximises the cooling surface area relative to volume. The spiral arrangement of the tubes creates eddy shedding, which like the wake generated behind a bike or a truck, swirls the flow in behind the tubes, allowing the faster freestream flow to get closer to the surface and therefore transfer heat between the two more effectively.
The tubes are pressurised with helium at over 200 bar during operation, and subject to temperatures of over 700°C. The key challenge for precooler construction was forming and joining these tiny tubes in Reaction Engines’ assembly plant at Culham in Oxfordshire. This included creating leak-free joints at the ends of each tube, where the metal temperature in operation would be highest. The solution involved vacuum brazing several thousand joints simultaneously.

There was no obvious facility for testing this unique precooler, so – supported by the US Defence Advanced Research Projects Agency (DARPA) – the company built its own hot-air test facility in Denver, Colorado, and carried out a series of tests at increasing temperatures, culminating last October with a test to replicate performance at Mach 5. To supply the required air mass flow through the heat exchanger at the required temperature (1000°C), a donated General Electric J79 jet engine was mounted just outside the test building, to run at full power with maximum afterburner. The hot air was fed into the test unit and directed radially into the HTX before exiting outside. All elements including the test rig and ducting, the complex helium loop, and the instrumentation for measuring performance, had to be designed to withstand the effects of full test load, including substantial thermal movement. The hot helium also must be cooled before recirculating through the cooler. In the SABRE engine, this will be achieved in a heat exchanger with the liquid hydrogen fuel: for the precooler test, a large water boiler was used instead, rejecting heat as boiling water and superheated steam.

To everyone’s delight (and, no doubt, relief), the test programme ran flawlessly. 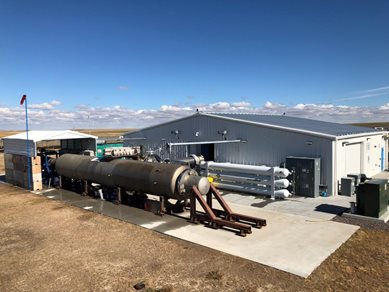 Reaction Engines’ test facility in Denver, Colorado, for testing the precooler up to 1,000°C. Heat was generated by the J79 jet engine running at full military power (left, with its exhaust plenum in the foreground). The hot air is diverted at right angles to feed the HTX in the shed behind © Reaction Engines

Meanwhile, development is progressing concurrently with the other major elements of SABRE, notably the air-breathing fuel-efficient core engine. The main objective is to demonstrate the operation of an air turbo-compressor driven by a close-cycle helium loop, with liquid hydrogen used as both a fuel and a heat-sink. Driving the air compressor from the helium cycle allows useful work to be extracted from the hot air, reducing the amount of cooling done by the hydrogen and removing the turbine from the exhaust stream (unlike a conventional jet engine), keeping thrust high and mass down, a key feature of the SABRE design. The successful precooler tests have already demonstrated that the air entering the turbo-compressor would always be at sea-level temperature and pressure. This simplified the design of the engine and avoided elaborate replication of hypersonic flight during testing. The test programme for the demonstrator core aims to begin in 2021.

Even if all goes to plan and funding is maintained, a SABRE vehicle in production is still probably at least a decade away, and meanwhile the company is exploring (with partners) other applications of its engine technology, particularly the precooler. This includes combining the precooler with a conventional jet engine – gas turbine, turbojet or turbofan – to improve performance. This could help produce faster jets, or more sustainable aviation. There is also potential for hybrid-electric propulsion.

The precooler could also be used for improving power station efficiency and, in particular, for converting waste energy into renewable electricity. Reaction Engines is also looking at developing miniature versions of the precooler for Formula 1 and the high end of the automotive market is being investigated.

For some applications, taking the precooling down below ambient to cryogenic temperatures (-150°C) can potentially improve engine performance. But there are drawbacks, particularly the tendency for frozen water vapour to block the precooler. An ingenious methanol frost-control system was devised to prevent this and has already been successfully tested.

But perhaps the most exciting of the spin-off developments is the potential for hypersonic flight within the Earth’s atmosphere. This opens up the possibility of commercial airliners capable of Mach 5 – a stated aim of one of the company’s investors, Boeing – which could, for example, fly from London to New York in less than an hour. There is also clear potential for a new breed of hypersonic military aircraft, which has engaged both the UK’s Ministry of Defence and DARPA in the US.

BIOGRAPHY
Dr Helen Webber is an Engineering Project Lead at Reaction Engines. She is responsible at system level for the engineering leadership and technical solution of the fully integrated SABRE Core Ground Demonstrator (aka DEMO-A).