A real, full-size robot dog that can hold a conversation, follow an ultrasonic ‘whistle’ and even has a socket to recharge your mobile phone

Richard Hopkins FREng has built a full-size robotic dog out of inexpensive and easy-to-access technology. K9 can hold a conversation, move without a human controller and ‘see’ his surroundings. Richard explains how K9 works, and how he’s using the robot to inspire the next generation of engineers.

Richard Hopkins built his career delivering major new information technology systems, mostly for the UK government. If you’ve been in the UK for the last 25 years, then there’s a good chance you’ve used (or been processed) by one of his systems. The projects he leads are large and complex; back in 2011 he was appointed as an IBM Distinguished Engineer, an executive but technical role.

Five years ago, Richard started work on a full-size replica of Doctor Who’s robot dog, K9. His K9 is just like the one on the television; the only difference is that his is a real robot, not a BBC radio-controlled prop. K9 can wag his tail, hold a conversation and follow an ultrasonic transmitter. He even knows when he’s been patted.

“K9’s my long-term project to inspire kids, but he weighs as much as a big Labrador dog and I have to remove his tail to fit in my car! I pretty quickly realised I needed an easily portable version,” said Richard. “My new one is a third of the size and only weighs the same as a Chihuahua. Just like the big one, you can have a conversation, but his special additional skill is that he can play grandmaster-level chess. He’s called Kasperwoof.”

Kasperwoof’s name is a joke – he’s a canine homage to Gary Kasparov the world chess champion who was famously beaten in 1999 by IBM’s Deep Blue computer, the first computer to beat a reigning world chess champion. It is a sign of how far computers have come in that Richard claims that Kasperwoof would probably give Deep Blue a good match.

Richard has a self-imposed rule that all his robots must be made from inexpensive, commodity technology. His blog provides designs, code and explanations, and everything is published under an open source licence. He encourages students to inexpensively copy his inventions.

Why is this important? Older readers will probably remember IBM, but from the 1990s onwards, IBM slowly disappeared from public view. As it shut down its consumer-facing divisions – typewriters, then printers, PCs, and laptops and ceased to be as visible to everyday consumers. The company encourages its employees to work with schools and universities to inspire pupils to study STEM subjects and learn a little about the company.

Richard explains: “When I was in primary school, Star Wars was the thing and the robots R2D2 and C-3PO were stars. Back then, even Doctor Who had a robot dog. When I talk to kids today, nothing much has changed … artificial intelligence is a bit scary, but robots like BB-8 are still cool. So that’s what I decided to do. I would build robots to inspire kids.

“As part of the STEM Ambassadors scheme, I visited a school where I met children in years four to six. I’d been warned by my wife, an ex-primary school teacher, that year six might be challenging and that nothing I’d be able to do would impress them. Not so. I knew I’d won them over when one of them asked ‘And they pay you to do this? Are you a genius?’ I would have grinned. ‘Nope – just an engineer, still learning’. I’m now roughly the same age as their grandfathers, but they were almost in awe that I’m still being paid to have fun and learn new things. For a brief moment they grasped why engineering is so great. I hope that inspiration lasts.”

Richard is convinced that his work has brought unexpected benefits, helping to transform some of his major system designs. IBM Distinguished Engineers deliver major new innovations or design and build challenging systems. Richard explains: “This continual focus and valuing of questioning and renewal has helped IBM to exist well beyond 100 years. But it’s that questioning that keeps us innovating and inventing. Our challenge, of course, is staying up to date with fast-moving technologies.”

Things he has learned from his robots and commodity technologies, especially cloud and AI, have helped IBM deliver new systems for clients. Richard recalls one episode “The ‘hands-on’ knowledge that I gained from building my robots meant that I had an in-depth understanding of how to automate the creation and testing of new systems on the cloud. That convinced the client that we were the right company to work with. On other occasions, simply being able to talk about the practical pros and cons of the latest technologies has made all the difference when co-creating solutions with the client’s team.” 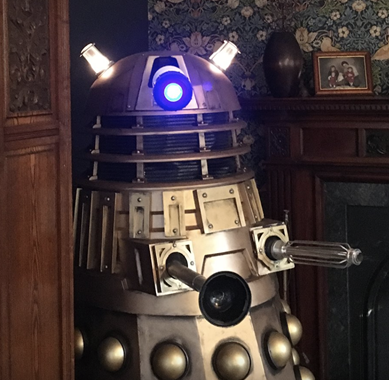 Dalek Fry, the doorman, works as an around-the-clock security guard

Richard has also found that he pushes both himself and technical boundaries. For example, he says: “Imagine you want your robot to find you and you’re holding an ultrasonic transmitter. Your robot dog has five ultrasonic sensors arranged around his body, which are creating a flood of raw sensor data. Unfortunately, the data is noisy, so you must perform an algorithm sequence on each to separate the signal from the noise. Those signals then have to go into a neural net so the robot can determine the bearing and distance for the transmitter, which will allow him to home in on you. It sounds simple, but imagine having to do that every few milliseconds on a £15 microprocessor. When you have powerful computers with GHz processors to play with, making every clock cycle count is a forgotten skill. Not for me, not anymore.”

“Not many of my family or friends understand what I do as an IBM Distinguished Engineer, but my robots capture the essence of it and allow the kids to imagine what I do. Because of my ‘commodity technology only’ rule, budding engineers can follow my lead.”

One of Richard’s ‘robot proteges’ built his own K9 from cardboard that could answer basic questions. Now in college, he is working with IBM Researchers in Australia and New York on a project to engineer a companion robot for those with Alzheimer’s.

Richard is currently working on a Dalek that acts as a doorman for his home. The Dalek works out who is in, or out, of the house using their mobile phones and then recognises faces so it can greet you or say goodbye. The lights and the iris of his eyestalk are all under computer control, so “when he ‘wakes up’ and talks he’s pretty convincing. Of course, if he doesn’t recognise you he threatens you with extermination. He’s grown quite famous with our local delivery people.”

BIOGRAPHY
Richard Hopkins is an IBM Distinguished Engineer and a STEM Ambassador. He is currently the 19th President of IBM’s global Academy of Technology. He lives in the North East. To find out more about his robot designs, visit his blog at https://k9-build.blogspot.com/ and for more information on code, visit https://github.com/hopkira