LNG is natural gas condensed to a liquid by being cooled to -163°C. This process reduces the volume by a factor of more than 600: a single shipload containing 150,000 cubic metres of LNG equates to carrying 90 million cubic metres of natural gas © SovComFlot (SCF)

Babcock LGE has developed truly disruptive technology for transporting liquefied natural gas. Its ecoSMRT® reliquefaction system reduces the carbon footprint by up to 50% and returns more than half the boil-off gas that would previously have been lost back into cargo storage. Dominic Joyeux asked the 2020 MacRobert Award finalist’s team about its innovation.

Boil-off gas is a problem that all tankers carrying liquefied natural gas (LNG) face. The temperature-controlled tanks on board ships cannot provide complete insulation against warming. The result is that some of the LNG evaporates, which produces the boil-off gas. The resulting gas has to be removed. Part of the boil-off gas can be used as fuel for the main engine and auxiliary generators, with the surplus being either burned in a gas combustion unit (GCU) or reliquefied.

In a typical 20-day voyage, about 2% of the total volume of the LNG cargo turns into boil-off gas. Thousands of tonnes of cargo are lost each year on LNG carriers without a reliquefaction plant onboard when cargo is burned in the GCU and, up until now, reliquefaction plants have had the complexity of an external precooling system and the energy needed to power it. Thanks to a small team of engineers based in Rosyth, things have changed. Their work has refined onboard reliquefaction that delivers a 40% reduction in the physical space required and huge environmental savings.

Formed 50 years ago, Babcock’s Liquid Gas Equipment (LGE) has always specialised in the transport of volatile liquids such as LNG and liquefied petroleum gas. The company was acquired by Babcock International in 2012 but still retains its own identity and engineering focus. It has been providing services and working with the world’s largest shipbuilding company, Hyundai Heavy Industries, for many years. LGE set out to solve the engineering challenge of the excessive amount of boil-off gas being wasted.

After much discussion and commercial negotiation, Babcock provided the risk capital of £1 million for LGE to solve the problem. If successful, Hyundai Heavy Industries would have an exclusivity deal for two years. LGE retained the intellectual property since its conception with full rights to sell the technology to third parties. The deal was agreed, now the problem just had to be solved.

Transporting liquefied gas is an area with hundreds of patents. One of the key challenges was to come up with something different that didn’t infringe on any other patent. The aim was to develop a modern efficient reliquefaction plant that was fully automatic and simple to operate. 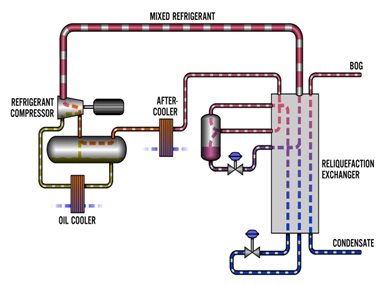 The ecoSMRT® module contains a closed loop recirculating system of a refrigerant mixture, which is compressed in an oil-injected screw compressor, cooled by freshwater, and fed into a multistream reliquefaction heat exchanger to generate the low temperature necessary to condense and precool the boil-off gas, which is then returned to the cargo tanks © LGE

LGE aimed to improve on alternative technologies to re-liquefy boil-off gas, which had often used cumbersome, inefficient systems built and placed onboard ships. These used external or auxiliary cooling systems, such as secondary refrigeration setups that required an additional compressor – an energy-intensive complex piece of rotating machinery that took up space and used up power.

LGE took a fresh look at the overall design requirements and combined the heat loads and related functions into one heat exchanger. Using this as the heart of the design meant that only one piece of rotating equipment was required – the main refrigerant compressor.

This breakthrough concept led to the ecoSMRT®, a simpler and significantly more efficient design, both in terms of performance and size. By incorporating the precooling of the boil-off gas into the main heat exchanger (a bespoke plate-fin heat exchanger, where plates and finned chambers are used to transfer heat between fluids), there is no need for an additional compressor, cooler, or knock-out drum. It simplifies the process, removes weight, frees up space, and cuts out a whole raft of equipment.

The ecoSMRT® uses an oil-injected rotary screw compressor. Special attention was paid to the handling of oil carry over and a patent-pending bespoke design was developed to prevent oil carry over into the cryogenic section of the reliquefaction condenser. If this happened then the temperatures of -163°C would cause the oil to freeze and consequently the system to fail.

LGE tackled this challenge in two ways. The first was to design the ecoSMRT® so that it incorporates an inverted U-bend in the piping around the heat exchanger. Simple but effective, this solution physically segregates thermodynamically equivalent oil-containing streams from the cryogenic parts of the heat exchanger. This eliminates the risk of contamination and subsequent operational problems.

The second solution was to select the most appropriate lubricant and prevent it from coming into contact with the cold sections of the primary heat exchanger. The team worked with Hydrafact, a gas hydrate specialist, to laboratory test a selection of lubricants and find a bespoke solution. 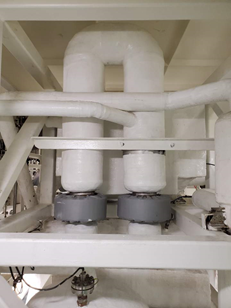 One of the most impressive things about this project was that it only took three years from concept (2015) to first sale (2018). In the end, LGE went straight to production without a prototype. Everyone involved must have had enormous confidence in the design to build a multi-million pound unit that fits into a LNG tanker without making a full mock up model first, but the iterative engineering design process involving different disciplines created confidence in the undertaking.

LGE used innovative thinking, dynamic simulation, rigorous analysis, and continuous improvement practices to ensure that the skid design the engineers had chosen was as efficient and compact as possible. The team modelled every area and then went back to the different manufacturers they were working with. This proactive work over a short period enabled the team to resolve many problems.

The computer-aided engineering 3D model was used for the customary construction and operability reviews. In addition to this, a virtual-reality model that could be ‘walked around’ was also created. This supported early familiarisation of the layout, but also allowed the crews who will be operating the plant to have hands-on input to the layout.

For shipowners, ease of operation was a crucial factor. A gas chromatograph helps automate the system – the machine separates the mixtures and samples both the boil-off gas and mixed refrigerant streams to determine if the mixed refrigerant gas composition is optimised to the LNG. After sampling, the operator can add the required refrigerant gas to improve the performance of the plant via its integrated automation system.

The ecoSMRT® also takes up less space – it is 40% smaller than existing reliquefaction setups. The increased liquefaction rate and lower power consumption reduces through-life costs too.

A 50% reduction in maintenance costs is achieved by halving the amount of rotating machinery onboard.

The ecoSMRT® skid fully assembled – as delivered to shipyard © LGE

The final ecoSMRT® skid measures 11.2 metres long by 5.5 metres wide by 6 metres tall – the dimensions can be tweaked for different ships when installed either as retrofits or as pre-builds. It is, in effect, a drop and plug-in system. The first sale was in 2018 and the first units are already crossing the oceans on LNG tankers.

Feedback from the commissioning, gas trials and early operation of the plants has been taken back into a review of the design but the real-world functioning of the system is mostly as forecast. The vibration design had been thorough and had anticipated all possibilities. A large tanker being buffeted by sea waves will encounter a lot of pitching and rolling: the engine will shake and the propellers will churn. The steel frame of the module and all the piping and equipment in it will feel all these vibrations, as well as the buzzing of the refrigerant compressor. Tuning the skid for all these sea-going eventualities has proven to be a highly successful example of mechanical engineering.

This engineering impressed the MacRobert Award panel of judges, along with many other aspects of the innovation including its commercial and environmental potential. In the first two years since product launch, 39 ecoSMRT® modules have been sold, with 34 in production and five already in use. This represents achieving a 40% addressable world market share – a remarkable figure.

For ship-owners, the fact that 56% of the boil-off gas is captured and returned to the cargo tanks by ecoSMRT® is a major factor – with the remainder used to fuel the main engine and auxiliary generators. Tankers that didn’t have the additional reliquefaction options would typically use a third of the boil-off gas for engine fuel and lose nearly two-thirds by burning it off in the GCU. As well as the monetary gain this represents, it means that each such tanker will now stop an estimated 19,000 tonnes of CO2 from being produced every year.

With demand for LNG set to double by 2040, boil-off gas recovery will be an important factor in improving the environmental credentials for carrier fleets. When all the ecoSMRT® systems currently being produced are operational, they could save nearly 750,000 tonnes of CO2 emissions a year compared to no reliquefaction. With the industry’s carbon footprint facing closer scrutiny from the International Maritime Organisation, this is an arresting and significant achievement.

The author would like to thank MacRobert Award judges Dr Liane Smith FREng and Gordon Masterton FREng FRSE for their help in the writing of this article.

Engineer Richard Hopkins FREng uses his robotic designs to inspire young people and encourage them to pursue an interest in engineering.

Shadow Robot Company’s mechanical Dexterous Hand is being employed to do the jobs that human hands cannot.