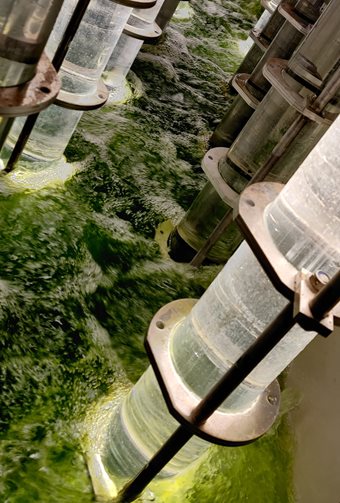 When a toilet is flushed, bath emptied or washing machine finishes, that wastewater needs to be treated and discharged safely into the environment. Additional cleaning is becoming more important as regulations call for lower levels of phosphorous in returned water. Geoff Watts spoke to Andrew Best, Business Development Manager at Industrial Phycology, about a technique that is using algae for purification.

The idea of using algae to purify polluted water has been discussed for decades. However, aside from a few niche applications or in circumstances where resources are so limited that nothing else is readily available, algae have yet to make it into the mainstream. That could soon change.

A demonstration plant installed at a Wessex Water sewage works on the outskirts of Weston-super-Mare in Somerset is showing the way. Before the wastewater generated by the works is released into the environment, a portion of it is passing through a further set of tanks installed by a company called Industrial Phycology (I-Phyc). Through a clever combination of biology and engineering, I-Phyc has created a practicable and economic way of using algae to give this wastewater a further clean up before discharging into the environment.

The need for additional cleaning of wastewater grows increasingly pressing. In response to the EU’s Water Framework Directive, regulators have become more vigilant. In particular, the Directive reduces the maximum permissible level of phosphorus in the water discharged by some sewage plants from 2 mg/l to 0.2 mg/l. Although no longer an EU member, the UK remains committed to a phased introduction of the new and lower level for at least the next five years.

Where wastewater is already getting an additional clean up, the methods currently used are mostly chemical. The standard technology for removing phosphate is by precipitation using salts of calcium, aluminium or iron followed by sedimentation and filtration to produce a sludge, which then requires disposal. I-Phyc claims that algae can do the same job more completely and more cheaply – and without generating a chemical sludge. 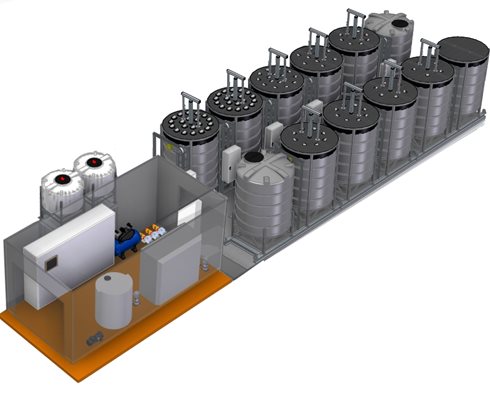 Algal metabolism relies on photosynthesis – a process needing carbon dioxide, water and light used by plants and other organisms to produce a chemical reaction to fuel their activities. Algae therefore need light to grow and reproduce. The simplest way of treating wastewater is to channel it into open tanks, add the algae, leave the tanks exposed to sunlight, and let biology perform its magic. The drawback is that a flourishing population of growing algae soon limits the penetration of light into the depths of the water in which it is growing. Only those organisms at or near the surface can get the light required to function at full capacity.

Tanks or pools that are shallow, and cover a much greater surface area, overcome this hurdle – but football-pitch-sized chunks of land are not universally available. The space required for such a set up may well render the installation impracticable, uneconomic or simply impossible: practicality, and the weather, simply rule them out for much of the UK. “They are a non-starter as they do not treat and reuse algae as we are able to do in a controlled environment, providing the correct amount of light 24 hours a day,” says water engineer Andrew Best, I-Phyc’s Business Development Manager. “We outperform removal rates; where algal ponds take days to remove 1 or 2 mg/l [of phosphorous], we can remove 8 mg/l (or more) in six hours. The current technology uses chemicals to precipitate solids, the chemical and disposal of these solids carry a far larger energy (and CO2) footprint than the energy we use to provide lighting for the algae.” Although operated on a commercial scale in a few countries with more abundant land and sunlight than the UK, the shallow tank solution to the light penetration problem has not been widely adopted. Another alternative would be to pump the wastewater and algae into long glass tubes exposed to surrounding light. This has been tried and is successful at a small scale. However, so far it has not proved practicable on an industrial level, partly on account of the photosynthetic activity of the algae, leading to a build up of toxic levels of oxygen in the tubes.

I-Phyc’s approach to the problem lies not in bringing algae to the light but bringing light to the algae. The company was set up in 2012 by algal scientist Daniel Murray, then working at the University of Bath, but now I-Phyc’s Chief Technology Officer. His decision to form a company was fostered by signs of encouragement from the water industry, and by the self-evident need for new thinking on the issue of removing contaminants from wastewater.

I-Phyc devised its system, tested it at laboratory scale, built a pilot plant and then, with the cooperation of Wessex Water, the demonstration plant that is now installed and operating at Weston-super-Mare. The algae and wastewater in the system are housed in large 25 cubic metre tanks. Light is brought to their interior via arrays of vertical glass tubes, descending into the depth of the tanks. The light itself comes from LEDs within the tubes. The density of the tube array is such that all microalgae in the tank will receive sufficient white light to actively photosynthesise.

Bubbles released from the bottom of the tank and rising up through it ensure that the water and algae are kept moving. Although the tubes are fitted with a wiper mechanism, Andrew insists that “happy and well-fed algae” tend not to stick to surfaces.

Besides supplying the light needed by the algae, I-Phyc uses another trick: a means of gearing up the organisms to perform the work they are about to undertake and so boost their productivity. It calls this phase of the process ‘conditioning’. The company, for commercial reasons, is reluctant to go into the precise details of the conditioning process, but its effects on the activity of the algae are marked.

Tubes filled with LED lights reach the bottom of the wastewater tanks, allowing the algae to photosynthesise © I-Phyc

When the conditioned algae are subsequently mixed with wastewater, they rapidly absorb the phosphate within it, typically in six to eight hours. Once the process is complete, the now phosphate-rich algae are separated from the water by centrifugal action using equipment not unlike that routinely employed in the food and brewing industries. In appearance the recovered organisms resemble a thick and dark green pesto sauce.

Most of these algae are returned to the conditioning tanks to begin the cycle over again. But a small proportion – whatever is more than the needs of the process itself – can be harvested as a potentially saleable byproduct, for example as an agricultural fertiliser, as they are rich in phosphorous and nitrogen. Indeed, they have an advantage over conventional liquid fertilisers, some fraction of which run off the fields before they can be usefully taken up by crops. Minerals bound into algal tissue are released more slowly into the surrounding soil and are consequently less likely to run off. A small rural sewage works serving a population of 500 might produce up to two cubic metres of algae annually. The value of this may be only marginal in reducing the cost of the operation but chemical processing, by contrast, produces a sludge that is not only valueless, but also imposes a disposal cost. And the operators of a sewage works using algae would, of course, be spared the need to buy the agents required for chemical processing.

The performance of the conditioned algae is impressive: more than a threefold increase in phosphate removal compared with unconditioned organisms. Chemical removal methods operating at the limit of their performance might be able to bring the phosphorus level in wastewater down to 0.25 mg/l, but algal treatment reaches this level with ease. I-Phyc’s process can take the phosphorus down to as low as 0.05 mg/l.

The company’s Weston plant takes and treats only 5 to 10 cubic metres per hour of the full output of Western Water’s sewage works. This is because I-Phyc’s current process has been designed for smaller sewage works dealing with populations of below 2,000. Hundreds of such plants, dotted around the country, are currently faced with the problem of deciding how best to meet the new wastewater standards, so that is where the company is concentrating it’s efforts. Although Andrew says that “In the future larger works may well be on our radar”.

A study by the company has compared the capital and running costs of algal as opposed to chemical processing. It concluded that these costs could be as much as 20% and 50% respectively lower using algae, which also have a lower carbon footprint and, more importantly, remove ammonia from wastewater as well as phosphorus: two pollutants extracted for the price of one. I-Phyc is in discussion with three other water companies and anticipates announcing the construction of new plants soon. Integration into existing treatment plants presents, in principle, no problem. The additional process is simply ‘bolted on’ as one last step in the overall sewage treatment process before the water is finally discharged from the plant.

Even without regulation, public awareness of environmental pollution puts a pressure on officialdom to set higher standards of control. Wastewater is unlikely to prove an exception. If at some time in the future there is a demand to remove, for example, pharmaceutical residues, any sewage works using algal treatment would be well prepared. The versatility of these organisms is such that they can take up not only drugs but many other contaminants such as insecticides and plasticisers.

If all goes as I-Phyc hopes, the future of wastewater treatment will soon be acquiring a markedly greener tint.

How to keep a social distance

As the world begins to return to work after the pandemic, Arup has adapted existing technology to help offices maintain safe social distancing.