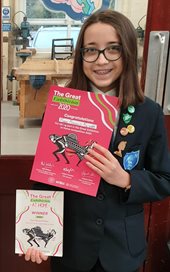 In September, The Great Exhibition at Home remote learning programme announced its prize winners. Students across the country took part in science experiments at home during lockdown, before submitting a video showing what they had learned.

Maya Mouzouris Marzetti in Year 8, from Park House School in Newbury, was awarded first place for her designs for a flood-resistant house and a high-tech beehive that monitors the hive’s health. The judges were impressed by her climate-saving ideas and research as well as her passionate presenting skills.

Second place was awarded to Isaac Pickering and Liliana Moores in Year 6 from Rode Heath Primary School in Cheshire. Their invention, the ‘pollution solution’, is designed to harvest plastic from the North Atlantic ‘garbage patch’.

Megan Waterhouse in Year 5, from Manor House School in Leatherhead, won third place. The judges really enjoyed hearing about Megan’s personal connection to engineering, which stemmed from building a greenhouse with her granddad.

In total, seven entries were awarded top prizes, including up to £500 to expand STEM subjects in their school, a meeting with one of the inspirational engineers featured in the competition and 30 special commendation prizes for individual entries.

“The high standard of all final entries was incredibly exciting and the Academy has been delighted to be part of a process that celebrates the innovation and imagination of so many bright young minds and future engineers. We were particularly impressed with the creative way technology was used to showcase engineering solutions in a fun and informative way,” said Scott Atkinson, Education Programmes Manager at the Royal Academy of Engineering.

The Great Exhibition at Home’s aim is to get British kids thinking about some of the biggest challenges we face today, to encourage the next generation of British scientists and engineers. It is a collaboration between the Royal Academy of Engineering and the Royal Commission for the Exhibition of 1851.

The Institution of Mechanical Engineers has partnered with BBC Bitesize to offer six STEM at Home activities for its programme, which include activities to encourage children to take an interest in science and technology.
The collection features six of the institution’s hands-on STEM at Home activities, which were launched earlier in the year to help parents and teachers during the pandemic. The resources include activity instructions, kit lists and instructional videos, and show students an exciting range of activities, such as building a mechanical hand, hydraulic propagator, catapult, and lunar rover.

BBC Bitesize offers learning resources for children including those who are self-isolating and studying at home, combining online learning with classroom time, or catching up on what they may have missed last term.
Activities can be accessed at www.bbc.co.uk/bitesize/articles/z64vp4j 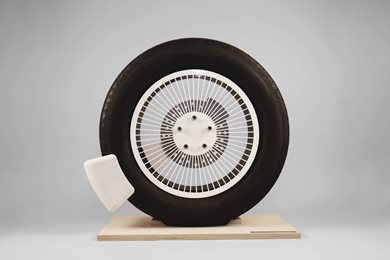 Globally, it is estimated that tyre-wear accounts for nearly half of road transport particulate emissions

A group of students from Imperial College London have won this year’s national James Dyson Award for their device to curb microplastic emissions from vehicle tyres.

Their device captures microplastic particles from tyres as they are emitted, and aims to reduce the damaging pollution the particles cause. Half a million tonnes of tyre wear is produced annually across Europe and tyre particles are the second-largest microplastic pollutant in our oceans.

Every time a vehicle brakes, accelerates, or turns a corner, the tyres wear down and tiny particles become airborne. The device is fitted to the wheel of the vehicle and uses electrostatics to collect particles as they are emitted from the tyres, using air flows around a spinning wheel. They claim that their prototype can collect 60% of all airborne particles from tyres, under a controlled environment on their test rig.

Once collected, the fragments can be reused in new tyres or other materials such as ink.

The device was also a runner-up in the international competition, which was won by Blue Box, a biomedical device for pain-free, non-irradiating, non-invasive, low-cost, and in-home breast cancer testing.

The Royal Academy of Engineering has announced plans to launch a new virtual museum in 2021 to help tackle the shortage of engineers in the UK.

Instead of being housed in a building, the exhibits in the virtual Museum of Engineering Innovation will be accessible via QR codes or ‘QRtefacts’. Placed in accessible locations around the UK, each QRtefact will signpost users to an individual exhibit within the online museum. The museum can also be accessed through Google Arts and Culture. It will celebrate the often-unseen engineering that is all around us, shining a spotlight on the diverse engineers that are making a difference to our everyday lives and futures in a bid to inspire the next generation.

The first collection of exhibits will include the carbon fibre blade of reigning world champion and gold medallist sprinter, Jonnie Peacock MBE. A QR code has been placed on the ‘Ferrari of running legs’, giving everyone (who can keep up with him) access to the virtual museum. Once scanned, visitors will be able to learn about the incredible engineering that went into making Jonnie’s blade, and how far the sporting world has come thanks to engineered high-performance prosthetics.

Jonnie Peacock commented: “Whenever I wear my blade I get such a great response, particularly from children, able bodied and disabled, who think it’s really cool. I’d like them to know that I wouldn’t be where I am today and have this super cool prosthetic leg if it wasn’t for engineers and amazing feats of engineering, which is why I am supporting This is Engineering Day, to help demonstrate some of the many different ways engineering makes a difference and to inspire the engineers of the future.”

Exhibits featured in the first collection can be accessed at https://artsandculture.google.com/partner/museum-of-engineering-innovation