The Holy Island Causeway Indicator is a small gadget that lights up to show visitors whether the causeway is safe at a glance, helping prevent people getting stranded due to flooding. 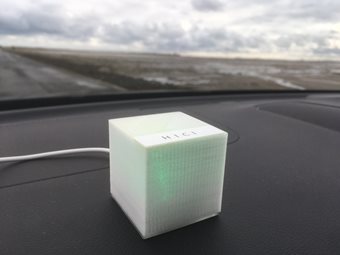 Twice a day, the Holy Island of Lindisfarne is cut off from the mainland by fast-moving tides. Almost monthly, the Royal National Lifeboat Institution (RNLI) is called out to rescue the occupants of cars stranded after the causeway floods. Northumberland County Council publishes a monthly table of safe and unsafe crossing times on its website, but Professor Andy Stanford-Clark, Chief Technology Officer for IBM in UK and Ireland, had an innovative idea to use the Internet of Things (IoT) to create an easy-to-read traffic light system.

The resulting Holy Island Causeway Indicator (HICI) is a small device that allows visitors and residents to quickly see the current state of the causeway. The 40-millimetre cube is 3D printed in translucent plastic. During safe times it glows green, while during unsafe times it turns red.

Professor Stanford-Clark wanted to clearly convey the information about whether the causeway was open or closed. The original design brief was to control traffic lights at the ends of the causeway, but after meetings with the Highways department, and vendors of traffic light and road signage equipment, it quickly became apparent that some product changes would be required for remote operation.

Instead, Professor Stanford-Clark decided to use the IoT to publish the important information. He analysed the requirements of the system and quickly eliminated physical sensors because of reliability, power and connectivity constraints. Instead, he used data from published tide tables from oceanographic models to indicate when it was safe to cross the causeway.

He had already developed a Wi-Fi-connected IoT device called GlowOrb, which contains a microcontroller and a red/green/blue LED bulb, the colour of which can be controlled via an MQTT connection to the IBM Watson IoT Platform (a server that appropriately routes the messages it receives). This could readily be adapted to be the output device.

The council webpage is cleanly formatted with a row per day, and up to two safe (green) and two unsafe (red) time intervals per day. Analysing the HTML of such a table is quite easy and reliable, as long as the design of the website is not changed in a way that invalidates the code. The project initially used this page as a data source for the safe and unsafe tide times, but has since been granted access to the application programming interface (API) behind the web page, which is immune to website redesigns and is more easily accessed.

An application running in the Cloud, written in the Node-RED ‘low-code’ programming environment, is triggered to run each day just after midnight. The tide times for the next 24 hours are retrieved through the API, and the content is analysed to determine times of the safe/unsafe transitions. These times are pushed into an event queue and tagged with whether it is a transition to green (safe) or red (unsafe).

Another flow in Node-RED runs every minute. This looks at the transition time at the head of the event queue and whether it’s time to change colour. It then publishes the appropriate colour to the MQTT broker to which all the indicators are connected. They all receive the new colour command and change colour to reflect the new state of the causeway.

Initial buyers of the HICI device gave feedback that a countdown to when the causeway was next open or closed would be valuable, as was knowing the actual time of the transition. This led to two further prototypes being developed: a countdown clock and a tide time display device.

The small device is powered by USB and can be placed in a prominent position, so visitors and residents can see at a glance when it’s safe to cross – and each purchase includes a donation to the RNLI.
For more information: travelnorthumberland.co.uk/product/hici/

How to keep a social distance

As the world begins to return to work after the pandemic, Arup has adapted existing technology to help offices maintain safe social distancing.