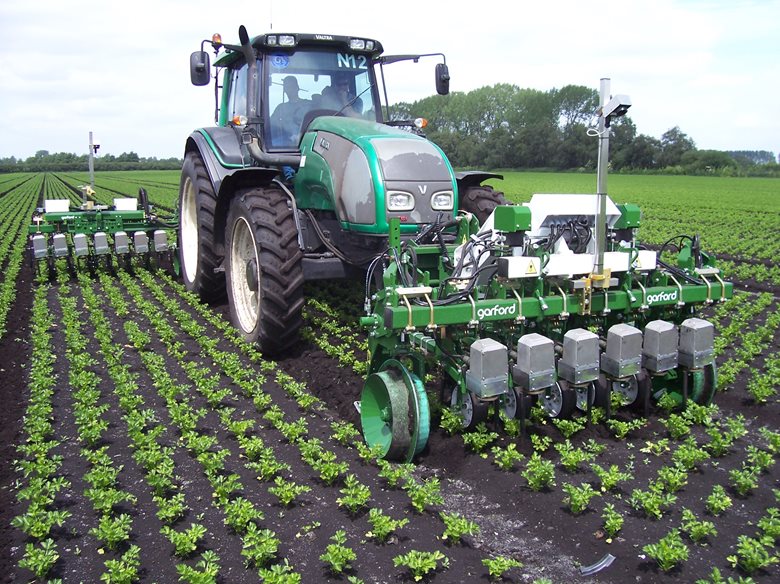 Weeds are plants out of place. When they grow within crops they compete for light, nutrients, moisture, and space, and can often reduce crop yield and quality of the plants that are being farmed. Dr Paul Miller FREng spoke to Dr Nick Tillett, Director of Tillett and Hague Technology, about the advances that are allowing farmers to control weeds using less chemicals.

For farmers, weeds may be plants that we widely recognise as weeds, such as thistle or dock plants. Or they might be otherwise useful plants that are self-sown from previous seasons and considered weeds, known as volunteer crop plants. Weeds growing within field and horticultural crops compete for light, nutrients, moisture, and space, and can often reduce crop yield. The presence of weeds can also make harvesting difficult and they can contaminate the harvest, for example with seeds or leaves.

Traditionally, farmers have controlled weeds by hoeing, cutting the growing unwanted plant just below the soil level. This operation used to be conducted manually, and still is by gardeners and a few very small-scale specialist growers, using a range of bladed implements for the task. However, manual hoeing is slow, physically demanding and requires concentration to distinguish between crop and weed and to ensure that the required number of crop plants remains in each area. When hoeing, it is important that the largest area possible is covered while the conditions are favourable – dry conditions are best, as there is much less opportunity for weeds to regrow. It is also important to kill the weeds early, before they compete with crop plants, which is easiest when they are small and at an early stage of growth.

In the era of modern farming, most weed control has used selective herbicides applied to crops as water-based sprays or to the soil as granules. This has been sufficient, timely, cost effective, and can be achieved with relatively low levels of labour. It has generally controlled weeds well, with only small effects on crop plants. However, the potential unintended effects of herbicides on the environment (on plants, animals and birds), human health, and water supplies has caused concerns.

Farmers and growers are increasingly finding it harder to buy appropriate herbicides, as obtaining approval for developing and using them is difficult, which also increases the cost of development. For some high-value vegetable crops, the choice of selective herbicides is now severely limited by regulations. Some weeds are also now resistant to previously effective herbicides and there is limited new chemistry to rectify this, partly because of the high development costs and constraints relating to environmental and human safety. There is therefore real pressure to find alternative sustainable and cost-effective ways of controlling weeds.

The first approaches to replacing manual hoeing involved mounting fixed hoe blades on a tool bar, a frame that is supported on a vehicle, which then moves through the crop with blades on the bar removing weeds from between rows. Steering the hoe blades in this situation is critical: the blades need to be within 25 millimetres of the crop plants. Weeds closer than that are likely to be out-competed by the crop and die away. It can be hard to achieve this level of accuracy while operating a vehicle, so farmers often hoed further away from the crop than was ideal, leaving a wider untreated area with a greater risk of weed competition close to the crop. One way to improve accuracy was to use a second operator who steered the tool bar separately from the vehicle. However, this increased costs, could only be done at relatively slow speeds and was difficult to carry out, particularly over extended periods as operators got tired and made mistakes.

There were several challenges that needed to be solved to make automated hoeing a viable option including: identifying small crop plants in the presence of a weed canopy; operating in variable light conditions, such as shadows of the vehicle and tool frame; being robust enough to operate reliably in relatively harsh environments and with staff skilled in operating farm equipment; and matching hoeing systems to the spacing arrangements used to plant the crop.

Recent technological advances have enabled automated hoeing to become a reality. Steering has been improved by using high-resolution satellite navigation systems mounted on the toolbar, alongside a hydraulically actuated side-shift to position hoe blades similarly to the seed drill when they were planted. However, using the crops themselves as a reference for steering the blades has proved to be a more robust approach. In 2001, British company Garford Farm Machinery Ltd launched its Robocrop precision-guided hoe using a vision-guidance system developed by Tillett and Hague Technology Ltd, another British company. This system can operate speeds of up to 12 kilometres an hour and while remaining within 10 millimetres of the crop row. One of the advantages it has over a human operator is that it can maintain this performance consistently throughout the working day.

Vision-guided systems use forward-facing cameras to collect sequences of images. An onboard computer system then analyses the images to identify crop rows and their position on the ground, and steers the hoe blades in response. The operator can see performance information on a console mounted in the vehicle cab, which shows the images collected, row positions and the actions being taken to steer the hoe blades. This on-screen information directs them to drive the machine down the crop rows, control the forward speed, and monitor the system’s performance. 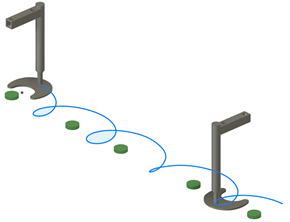 A diagram of the cycloid hoe path

Some crop plants are competitive enough to suppress weed growth when spacing between plants in the row is relatively small. However, when plants are more widely spaced, for example for growing lettuce, cabbage, cauliflower, and sprout crops, weed growth needs to be controlled. Once the position of the crop row has been established, the onboard computer can analyse the images to determine the positions of plants within the row based on the expected spacing and likely characteristics (size, shape and colour) of the plants. The machine can then hoe the region between plants: the Tillett and Hague in-row weeding system uses a hoe blade that is rotated in a cycloidal pattern (see image on right) that is matched to the detected spacing by varying the speed. This enables the system to remove weeds within the row and adjust the path so that the blade goes around the crop plants. Hydraulic or low voltage electric motors control the rotation, which can treat up to six plants per second in each row. 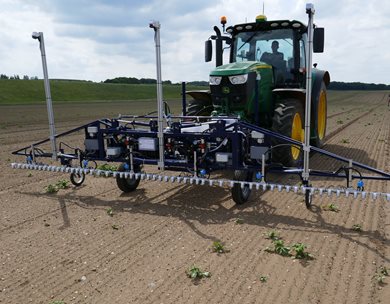 A spot sprayer working in a crop of onions to treat volunteer potatoes – a difficult weed in this crop. The tractor is steered with GPS but the vision system positions the spray nozzles relative to the crop

In some crops, the presence of large individual weeds, for example volunteer potatoes in crops of onions or carrots, can cause substantial problems that are difficult to address with either hoeing or selective herbicide sprays. Large weeds can sometimes establish much more quickly than the crop, making them hard to treat with hoeing without damaging the crop. The same image-analysis approaches, used to find rows and control the mechanical hoe, can be used for spot herbicide sprayer systems. These identify the position and size of ‘large’ weeds using the position within the crop row, colour, shape, and size within the captured images. The system can then target the spray at the detected weed only.

Field trials with commercial prototypes have shown that this system removes more than 90% of weeds with less crop damage than any alternative options, including manual treatments.

Spot sprayer weed control is a good example of the strategies that can be implemented with vision-guided systems. Spraying a total herbicide (one that kills all plants) risks damage to neighbouring crop plants through drift and splash, which can be adjusted within a vision-guided system’s control algorithm. The perimeter of a detected weed is defined by a polygon within the algorithm. Specialised nozzles mounted in a linear array across the machine then identify the area and spray it. 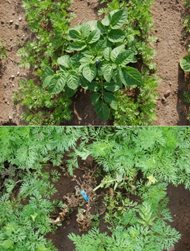 An example of a spot-treated volunteer potato in a crop of carrots: top – before treatment; bottom – after treatment. There is relatively low damage to the crop – the area where the weed was growing has been influenced by the competitive effect of the plant rather than the treatment

Some herbicides do not require the full area inside the polygon to be treated to achieve weed kill. In those cases, the risk of drift and splash on to neighbouring crop plants can be reduced by only switching on the minimum of nozzles required to achieve the required percentage cover. For example, it might only be necessary to turn on nozzle two to achieve adequate treatment. Alternative strategies could apply selective herbicides to the full area that the machine detects, since drift or splash on to neighbouring crop plants would not result in high levels of damage. Herbicide usage would still be reduced by typically more than 95% when compared to traditional overall application.

Over the past 25 years, research and development has explored ways of controlling weeds that are less reliant on herbicides. These approaches have included methods based on improved targeting of herbicides, for example by using directed laser beams and high voltage discharges. However, few have been commercially successful or competitive in terms of cost, safety, efficacy, and work rate. Systems using vision-guided hoeing are now well established commercially: for example, Tillett and Hague Technology Ltd sells more than 500 control systems a year to 15 equipment manufacturers worldwide – with most of the automated hoeing units being used outside the UK. The technology is making a substantial contribution to establishing sustainable and environmentally friendly approaches to food production.

BIOGRAPHY
Dr Paul Miller FREng was Technical Director at Silsoe Research Institute in Bedfordshire until its closure in 2006. After a period of working as a Specialist Advisor for the National Institute of Agricultural Botany (NIAB) and as secretary to the Douglas Bomford Trust, in 2016 he was involved in setting up Silsoe Spray Applications Ltd where he is now the Technical Director.
Dr Nick Tillett spent five years in manufacturing industry before joining Silsoe Research Institute to work on projects ranging from robotic milking to mechanical weeding. In 2005, he formed Tillett and Hague Technology with Dr Tony Hague.

Charging into the future

The Jaguar I-PACE is the company’s first all-electric vehicle, and was recognised as a MacRobert Award finalist in 2020.